Submitted by kovax — 11 hours, 59 minutes before the deadline
Add to collection 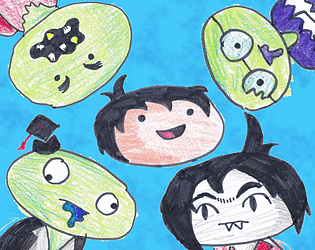 How does your submission match the theme?
Starting off from Shigeru Miyamoto's quote, we decided on making a game around our idea of materializing an object at will. We can use our powers to block zombies, trick them into falling down pits, and use them as platforms to jump on to.

Contributors
Kovács György and Kajnak Róbert developed the game from scratch, drawings were provided from Kovács Petra. We also tested the game and created the sound effects.

I really like the main mechanic! Cool but janky aesthetic. Is there a mrbtongue reference in the game?

I did ask my little sister to draw some pictures for our game, since graphics are not my strong points :) Glad you liked the mechanic.

I am really curious as to what you are referring to as the mrbtongue reference, I really love his videos, and have watched all of them 5 times each, but there is no conscious reference to it. Maybe you found an unconscious one :)

Haha, it was the "But what do they eat" line, which he repeats a lot in his Fallout 3 video.