A Tale of Wind and SeaView game page

Share a controller with a friend and explore an impossible relationship.
Submitted by Tobias Bruch (@tobiasbruch), justin_jz — 13 hours, 4 minutes before the deadline
Add to collection 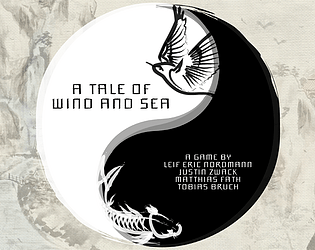 A Tale of Wind and Sea's itch.io page

How does your submission match the theme?
First of all, and most importantly, the movement meets the theme in the following way:
The characters leave a trail wherever they go, which influences their movement similar to a stream. This makes it possible for the players to achieve higher velocities, to reach the other hemisphere and the orbs they are trying to collect.
Besides this, the trails make it possible to defend the orbs in one's own area. They can either use their trail to move the orbs further away from the other player, or use their influence to let him drift in an unwanted direction.
One can argue that the menu also serves two purposes.
It obviously lets the player navigate to certain parts of the application, but it also acts as a narrative layer which gives insight about what might go on in the world of “A Tale of Wind and Sea”.

Very challenging to control, but otherwise a cool idea with lovely visuals :)

I love the style,  atmosphere and music a LOT.
I think the concept is good but the mechanic to get extra speed and reach the other hemisphere is a little bit complex  and difficult to aim