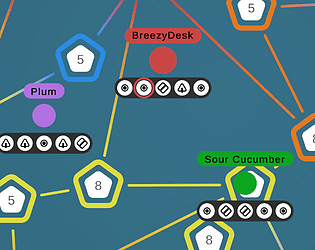 How does your game fit the theme?
You roll a random character, then reroll it if you want. Press start however, and you lock the character in permenantly. But the real roll of the dice is the multiplayer back-end!

This is a really interesting idea, I'd be interested to see it fleshed out in a post jam version (the absolute ideal would be and AR game, but that would be a very expensive gamble).

One way you could extend the mastermind game would be to have lower-numbered nodes be easier (with fewer digits, fewer symbols or more guesses). Because you can try again, you currently have unlimited guesses, so it might be interesting to lock players out of a code once they fail it (and then taking a high number would be a big deal. Additionally, you could prevent players from attempting a node unless their team holds an adjacent node. That would make holding on to some near the center super important and might develop into a strategy layer.

Thanks for your game, it gave me lots to think about :) If you're interested in a different mastermind variant, check out my team's game!

Thanks for the in-depth review! I'm glad you enjoyed the game.

Your suggestions are great too. I had already intended to have some kind of lock-out when you fail a node, but didn't have time to implement that. I hadn't considered making lower valued nodes easier/shorter codes. That's a really good idea, but I think your idea of having to have another node next to one before you can attack is totally inspired! You'd have to consider how you could restart if a team had zero nodes remaining, but that's pretty easy to solve.

The idea of a multi/territory game is interesting. I felt the theme could be better integrated and the works on visuals / sound design is quite light.

It fits the theme from my perspective. I massively rolled the dice by stepping way out of my comfort zone and doing a really risky game that I wasn't convinced I could even finish (which actually I didn't - there's no audio at all). I can see how it looks different from the player's perspective though, so I can take your criticism and agree with it.

It doesn't feel like the game fits the theme and it really lacks of music and sound design. Great game idea and it looks good, well done!

Remember that we were allowed to interpret the theme any way we wanted. My interpretation of Roll the Dice was to take a giant gamble on an idea that I had no idea if I could even do in the time!

Agree about the lack of sound and music. You know the excuse!

Cool concept! I like codebreaking games, and a multiplayer one is an interesting idea, though I'm not quite sure how this fits into the theme. As a proof of concept, however, it's neat, but needs some refinement.

For one, changing your own code should be on a separate button than space. Too many times I tried to interact with a node only to accidentally change my code.

It's hard for me to judge it properly, though, since there weren't many people online when I played.

The theme was "Roll of the Dice" and my gamble was to make a multiplayer game. Will the tech hold up? Will the servers collapse if too many people play it at once? Will it have no players at all and people don't realise it's even multiplayer?

You're right about the hit-sphere being too small for the nodes. I had hoped to have time to go back and refine all that, but you know game jams!

Interesting mash up between a strategy game and a guessing game.

I didn't really see the correlation between the number on a node when "attacking" another node. As long as the code was guessed, you win, it seems. And there is no penalty for retrying. So if I didn't guess in the 5 or 6 tries, I could just keep going back repeatedly. I don't know if I was actually playing against other players, or the computer, I just didn't get a sense of that.

There were a few nodes that I could not actively collect or conquer or whatever.

The graphics and audio were ok. Some audio feedback when doing things would have been nice, but the graphical display of a little pop was good. The collision boxes for the nodes could be a little better. I felt like my character was on top of a node, only to go into the code selection box a little bit, causing a bit of confusion.

Thanks for the submission!

Submitted
Roll for your Soul
LikeReply
DeeperbeigeDeveloper200 days ago(+1)

Thanks for the in-depth review.

You're definitely playing against other humans. But you might not have had anyone else playing when you played! All the codes and owned nodes are set by real people. And you can see them moving around in the world if they're online at the same time as you.

The numbers on the nodes indicate the score your team gets for owning it. I think that's in the instructions somewhere, but it's easily missed. It's meant to add an incentive for players to fight over the higher value nodes in the middle, just so you get to see other players when there aren't many people online and playing.

The only penalty for retrying a node is that you can't see any of your history. There's nothing stopping you from retrying straight away. I was thinking of adding a cooldown, or force you to try a different node first or something, but it's already a complicated enough game and I didn't have time to add audio, so definitely didn't have time to add refinements. So while I take the criticism on board, I can hide behind the usual jam excuse of not enough time!

I know the title says MMOG, but I must have been some of the few playing. It's good to know about the numbers. I can see some balance issues where a player can just run to a high number and take it over.

The more I've thought and played it (it's still on my system), the more I wonder what happens in the long term. I think it's a great concept and I can easily see this being a viable game that can make money one day, for sure! But I can also see that if a new player joins after all the nodes are captured, they'd give up trying to even get a single node. The Mastermind game take a while, and I can see people trying to get a node the first time before giving up and uninstalling it. I am not saying it's a problem, but something I can see happening with the degraded attention span.

If the code you're working on is changed by another player, it kicks you out of the code-breaking minigame. You can try again straight away, but the code will be different.

It's an interesting experiment I think. One player took loads of the central nodes for team red. I spent a couple of minutes cracking the first one, then tried that code on other nodes. It worked, he hadn't bothered to change it between nodes. There's a lesson about using the same password for everything in there somewhere!

It really hasn't had many players. I tend to leave myself logged on if my computer is on, but I haven't seen anyone join at least at the times I've been checking. You can see how many people are playing in the score panel - it shows the number of people in each team, and the total online.

You're right, the Mastermind/Wordle game is too hard, but you can use psychology too. In times where there aren't many players, you can try the same codes on all the same coloured nodes like I did. With more players, you can see the code someone is using while they're attacking a node, so if they move away you can remember it and take it back when they aren't looking. There's all sorts of subtlties, and there's almost certainly aspects I haven't considered too - this is the first realtime multiplayer game I've built!