Submitted by MegacrashREX — 7 hours, 40 minutes before the deadline
Add to collection 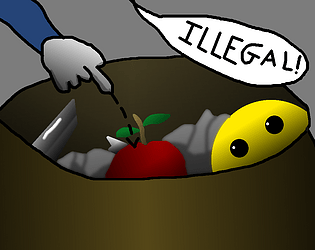 Overall, this is just a guessing game. Unless the level explicitly tells you what's going to happen, there's no way for you to know the pattern the guard is going to use to check your inventory. The only level that I thought came close to being clever with this was the one called "Cross Plus Square Equals?", but even then, I'm not sure it's entirely clear what the player is supposed to do unless they've played the level already.

However, the most extreme example of this is in the level where you have to pick between the two guards: one who is annoyed, and one who is focused. How is the player supposed to know how those two adjectives translate into search patterns on a grid unless they use trial and error to figure it out and replay the level?

This next comment isn't really related to the core mechanic of the game, so it's more of a side note, but I think it's still relevant: is there any reason this game needed to be in 3D? I feel like making this a 3D game actually might have held you back. If you had just made this a 2D game, you probably would have had more time to focus on designing the main mechanic and making the guard and inventory system more polished and fun to play with. I don't know how much time you spent making the 3D models, designing the 3D levels, and programming the controls for walking around in the environment, but I think that time would have been better spent on the main mechanics of the game. Walking around sort of feels like an inconvenience you have to go through to get to the interesting part of the game (messing with your inventory and getting searched by guards).

Overall, I'm not really impressed with the mechanic. I think there's some potential there, but only if the search pattern of the guards are clearly communicated to the player somehow (or hinted at). Otherwise, it's just a game of guess and check until you know how each guard is going to respond.

Submitted
Aethernauts - Beyond the Void
LikeReply
NarsisSubmitted2 years ago

Definitely has potential.  Doesn't seem to be a way to exit the game though.  It's also really easy with all the clues given ahead of time and the ability to reshuffle your inventory pretty much whenever.  Also not sure exactly what the point of it being in 3D is.

As it is I also wouldn't really call it a stealth game.  But if you made it so you can't so easily rearrange your inventory (like being in line of sight of guards for example, and maybe have them AI'd to follow after you if you try hiding around a corner in certain zones), it'd fit much better.