You Are The Rats In The WallsView game page

A retelling of H.P. Lovecraft's story with a twist: you play as the madness.
Submitted by Alex Blechman (@AlexBlechman) — 1 day, 27 seconds before the deadline
Add to collection 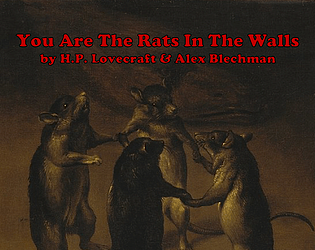 You Are The Rats In The Walls's itch.io page

I really like the idea of playing the madness in a Lovecraft adaptation. The meta jokes are fun, but more than that they surprisingly end up evoking the story's fear of the inevitable pretty well, even while characters say things like "do a cannibalism."

The idea that you being the rats means you're also effectively Delapore is a nice twist on the story, too. Even though I found the controls very frustrating, in that light there's something ludonarratively consonant there.

If I were a judge, I'd name this the best overall. It's got great graphics and an inventive game mechanic to boot!