Explore the secrets of an ancient temple using your trusty Hydro-Tank
Submitted by Hobcramwork — 1 hour, 4 minutes before the deadline
Add to collection 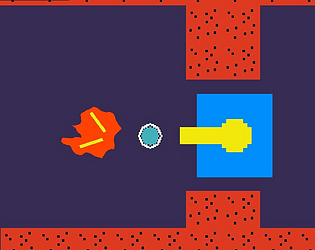 It would be really handy if the camera followed ahead a little so that you could see what was coming in front of you.  the play area feels really small.  It would also be great if the fire balls only moved in up or down directions so that you could shoot them. quite tricky to kill them sometimes because I couldn't aim diagonally.

love the concept though, and shooting fire with water, that was really fun!

Hi there, the original intention was for the camera to zoom out so that you could see most of the game level in one screen, but since I didn't know how to do so at the time and I was rushing to get the game done before the deadline, that didn't happen. Once I have learnt how to do so, then I'll implement it in the game's coding :)

You can only shoot water bullets in 4 directions, so diagonal shooting is out of the question :p; initially I had limited the tank's movement to 4 directions, but because I tend to press 2 directions buttons when running around a room, it felt very slow and unsatisfying, so I changed it to 8 directions.

I suspect the reason why you had a tough time handling the fire sprites was that in addition to the play area being very small, you hadn't attempted to run and gun at the same time, which is understandable because the way I played it would be very different than the players. I had not looked into this aspect of gameplay as I was in a rush and was a little spent by the time I was done, but I'll be changing it a little to accomodate new players.

I'm happy you found it fun to shoot water at fire sprites, so thank you :)

Hm, it seems like the play area is a bit cramped, I found myself repeatedly ducking in to scatter some water, then rushing back out to evade pursuit. It's a bit hard to aim since I can't look too far ahead, and I can't change my firing angle while moving so I have to stop whenever I should be strafing. Perhaps one way to improve this is if you used wasd to move and arrows to fire, have you tried something like that yet? :)

Hmm, you have a point regarding the game level, though if you run away long enough, they'll stop following you :)

Yes, that was the same point made by numerous people playing Spiderbite, and even though he gave another set of controls for the spider's weapon, I didn't do that for this game, for some reason. This is what happens when the developer is good at playing his own game, and forgets to factor in new players.

I had spent most of last night and today early morning working on this game and submitting it, so do forgive me for the oversight in the controls. I'm sure Monsterbat would be most amused by my error :p

I will be fixing the controls later today, and I might put up a Windows downloadable version at about the same time. Thank you for pointing out all those details; it helps a lot :)