Submitted by Mr_Aporia (@MrAporia) — 21 minutes, 29 seconds before the deadline
Add to collection 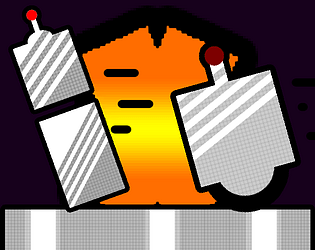 I had a lot of fun playing this! good job! with the music I feel like you have a good basis there I just felt it could be more developed given the time, one thing I noticed as well was that the sound effects panned depending on whichever was the player was moving which was quite disorienting seeing as the player was still in the centre of the screen.

overall, I think its a great idea and would love to see more on it!

nice short little platformer! I thought you had some nice visual effects (like the lighting in the darker levels & trailing player effect) and though the jump was pretty floaty, it really seemed to work for the game, especially with the double jump later on!

It took a minute for me to understand the upgrades and sometimes I didn't even really notice a difference. I would suggest some sort of visual representation on the screen to tell the player "speed increased" or "higher jump unlocked", whatever the upgrade may be. Also the music was a little repetitive and there's one note that repeats throughout that's just way louder than the rest of the track.

Yeah i knew the music was a problem more of a programmer, bit of an artist but defiantly not a composer lol. But thanks a lot my dude i will strive to make sure tho that i telegraph the purpose of power up in my next game way more :)