A framework faction for FIST
Submitted by samizdatediciones — 14 days, 2 hours before the deadline
Add to collection 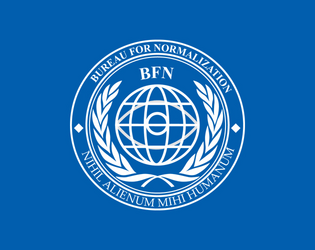 That being said, the joke does go on a bit, even though I will never get tired of ball-point pen diagrams in the margins. The Bureau for Normalization has easter eggs for the video game Control, but in addition to the inspirations listed in the supplement you can also get ideas from Men in Black, Delta Green, Stross's Laundry series and the Technocracy from Mage:The Ascension.

The text is mostly atmospheric but there are a few missions and some nice custom traits. BFN talents can include clever fixers, remorseless killing machines and a nice twist on "I roll to disbelieve"

Right now it's a great faction for a patron, foe or mysterious third party, but I'd love to see the author expand on this with more gameable content.

I will try to expand on what you mention in a Ver.2 of the supplement ;). There are some pretty good ideas in the jam entries

What if the Ordo Veritatis from 'The Esoterrorists' were a subset of one of the branches of the illuminati, AND were part of CYCLOPS? Just the right blend of Shadowy Conspiracy, Red Tape Aiding The Apocalypse, and Corrupt Field Operatives Save The World. Could easily be used as...

1- Antagonists who sometimes show up and help against a common threat.

3- The group that puts explosive collars on the PCs after a TPK type event, to allow further adventures instead  of just starting over from scratch.

I've certainly entertained the possibility of the Ordo Veritatis being a not so honest organization in the context of that game. They have a ''We are The Technocracy'' vibe about them that seems off  for a ''we are the good guys'' faction.
And I really dig your 3 point as a game device for replay value! it kind of made me think of what an organization like NERV could do to people other than teens :D

Burrito's Rules For Gamemastering, #384: Always have a 'You all wake up in a dungeon without your gear' mission for use in the event of an unexpected kinda-accidentally-BS Total Party Kill.  I'd use these guys in that vein for sure!

Great design! The Bureau is waiting..