Loosely based story on the best christmas film ever... Die Hard.
Submitted by Crowded Games — 18 days, 7 hours before the deadline
Add to collection 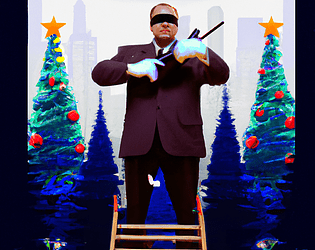 (i also was confused and almost got angry in the intro - well done :D)

Actually cool concept I was a little confused during the intro and thought it was the actual game, but after that it was amazing! Good Job!

Submitted
The Secret Adventures of Benny
LikeReply
Ian8torSubmitted301 days ago

Wow this game was incredibly fun to play, I love the concept of having to explore and find the walls on your own.

honestly the intro goes by too long and kinda "taints" the game,

because at first i was like "what?, is this supossed to be a topdown shooter or what?" then i was incredibly confused when one of the dudes i missed  pinned me to the wall and was expecting to restart

then it just throws me into self-deprecating blindness with a fun and intresting concept
the whole intro ordeal reminds me of when valve was making half-life 2,

in half life 2 there's this part where a bunch of civil protection corner you inside of a building, then beat you with stun sticks before alyx vance shows up and saves you

it dosen't help that your game's cover is the intro part, so potential players may think that's the actual game