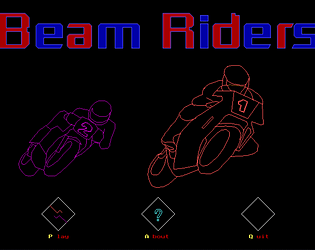 I had a game like that on my Atari as a kid. Later i learned about the Tron movie :-P. Sadly i can't *really* try it since it requires at least two players - it'd be nice if there was some simple AI for single player.

Regardles, what i really liked was the single-pixel-width vector graphics (i guess they are vector? They do look like vectors) and the overall aesthetic, though i think the game "board" (the screen where you are playing the game) could use some graphics too.

It'd be nice if it had some sound too, even if it was some PC speaker "brrrrt" sound :-P

Thanks! I hope to add an AI player in the future, as well as some sound and music. I might try and release a version for Windows, Linux and Mac. We'll see.

The game looks great.  I love the neon look to it, and it definitely reminds me of TRON.  The one thing I noticed is that I had to turn the speed way down in DOSBOX to get it to run properly.  If I had DOSBOX cycles high and attempted to turn the speed down in game, the game drew everything at the right speed, but the gameplay still ran at the higher cycle count.

Thanks for the heads up. I checked my DosBox config and I have cycles=20000.  I guess by default the config has cycles=max and this sometimes this results in game working too fast or unstable. My config file for Windows DosBox is found here: %USERPROFILE%\Local Settings\Application Data\DOSBox\dosbox-{version}.conf

I'll recommend this on the game page.