Out of the BreachView game page

A tactical puzzle demake.
Submitted by Lucas Stark — 3 hours, 15 minutes before the deadline
Add to collection 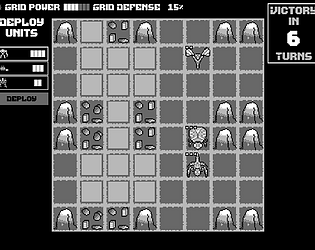 Out of the Breach's itch.io page

choice of interesting demake, I just evaluate, can you evaluate mine?

Thanks! I've already checked and rated yours, nicely done! I'd gladly play a full top-down GoW game like this, I hope you'll continue working on it once the jam is done. :)

I do not know if I can continue because of the rights, but I do want to

It's a bit buggy, with a lack of ability to deselect attacks rather negatively impacting how it plays (and my attempts to work around that being how I discovered the bugs, mainly it glitches the heck out if you select a unit and switch back while in attack mode). But honestly, it's not half-bad as a whole.

Currently you can deselect attack / unit by pressing the right mouse button. I should have put that information somewhere in the game, my mistake. I'll also add a "Cancel" button, visible when in attack mode. That should make it more clear. I also forgot to disable the attack when switching units. It will be fixed in the post-jam version.

A few bugs but still cool to play!

Thank you for the comment! What bugs did you encounter while playing? I'm planning to change a few thing for a final release once the jam voting is done, I also want to fix anything that might be wrong with it.

I played with my boyfriend and the first bug we encountered was that an enemy attack marker (the square around the cell with an arrow) remained visible indefinitely after the enemy was destroyed. This was a bit confusing but didn't keep us from playing. Then later we tried to finish our turn early and the warning message window would not go away even after we clicked "yes" several times (meanwhile the enemy turn was playing in the background). We had to click "no" eventually, which closed the window but made the game non responsive (no inputs worked after that). I hope this helps, I'll definitely check the updated version out!

I'm not sure what could cause that, but at least I know where to start looking. ;) Thanks, I'll let you know when the update is out!

Hey! I've uploaded the post-jam update version. I didn't find what the problem was (I was unable to reproduce it) with the warning message window, but I did rewrite that code to a hopefully more stable version. I've also changed the way attack markers are cleared, and in case that isn't enough I made sure they're all removed when the aliens' turn is done. There's also a Windows desktop build now, though if you use it, I recommend sticking to the default 800x600 resolution.