Splatoon demake for demakejam 2018
Submitted by Kitsu (@kitisplode) — 6 hours, 21 minutes before the deadline
Add to collection 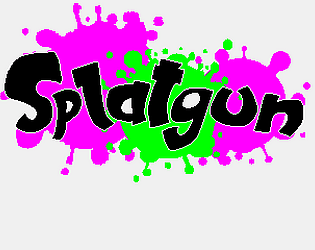 Nice work! the game works fine and i know how hard is to make a multiplayer. I played alone but i will try with a friend o/.

Awesome entry, even though I played vs myself. What I really loved is that simple and random bullet physics.

However, I saw that after a match, the server is doing intense calculations (both CPU and GPU usage). If you count it pixel by pixel, you can actually downsample it (HW acceleration) and then compare G to R/B .

It's currently counting it pixel by pixel and skipping every other pixel. My latest version is doing the same, though it's now skipping over 2 pixels in each direction, so i could reduce the number of pixels checked each frame from 480 to 120 without increasing the calculating time too much. This seems to have reduced the CPU and GPU loads per frame significantly.

I considered downsampling thanks to your suggestion. Unfortunately, it seems gamemaker doesn't have a good way to downsample surfaces outside of, like, redrawing the surface onto another smaller surface, so i figured i could accomplish mostly the same thing by just skipping pixels. The way i went could theoretically lead to cases where some crucial line of ink is skipped that downsampling could have avoided, but i find it unlikely to occur... Downsampling would probably be the better, more accurate, and probably more scalable approach anyways though, so i might try it in the future. Thanks again for suggesting it!

Go to the game page for instructions on how to run the server!! https://kitisplode.itch.io/splatgun