Brough-like. Collect runes to cast spells on monsters invading your castle
Submitted by Anoarith (@MCD_Artagnan) — 5 hours, 17 minutes before the deadline
Add to collection 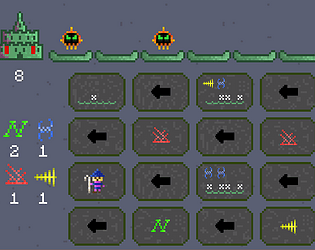 Very interesting idea! I included it in my 7 Day Broughlike compilation video series, if you’d like to take a look. :)

Clever Idea, and already makes for some interesting ideas. I think with a little more work you could have something pretty great.

Using your resources to their maximum potential feels great, and there's a lot of depth in that aspect to the game, but I think there's maybe a flip side that could use some work. There's no mechanism to 'pass up' a resource or attack. So that creates a problem where an attack is not very efficient (say hits 1 square) or a resource is not useful (yellow when you have 5+ of them), but you end up having to eventually collect it anyways just to cycle and spawn a new resource. This is a big part of what eventually causes you to lose more so than the enemies; at some point you can't afford to waste turns just to pick up a yellow resource you have no use for so you end up with 1, then 2, then 3 of a resource you don't want while getting starved out on the other resources.

Thanks for the feedback, I'm glad you took the time to analyze this :).

I think I'll work more on this game, I liked to work around this concept.