A cute stealth game inspired by Ghost Trick!
Submitted by ultigonio (@ultigonio) — 33 minutes, 2 seconds before the deadline
Add to collection 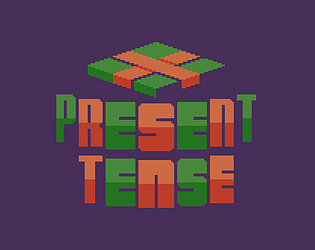 Very good logo treatment. This looks and sounds great and it plays really nicely. The effects surrounding movement and transitioning between the normal world and the plane of zippy-dooing (astral? ethereal?) are quite slick. The stealth mechanics work pretty well, though some small issues arise such as desynchronizing rotational views which leave a significant gap and make it trivial afterward. Ignoring that though, the only issue I found was with not getting any hints as to the existence of TVs. At first I thought the TV by the tree was a safe-door which is entirely on me, because … why? But even still I had no reason to believe that moving to a particular spot and then hitting a movement key would activate a thing. On top of that the behaviour seems to be different for the parents depending on if the TV is on or off (or perhaps if they only witness the switch?) The end got me to chuckle, and as a concept for this theme this was really nicely done.

Lovely game. I included it in my compilation video of all of the Awful Holiday 2018 games!

(x/post) Another stealth game, this one point-to-point style where you jump from object to object (with a couple movable or activatable) to get presents to kids.  Not quite Ghost Trick/Haunting Starring Polterguy but it's pretty fun to zoom around dodging guards.  The stealth's a bit wonky (easy to get guards stuck, things like that) but there's some fun here as a puzzle game.  While I felt it never quite shined in the level design category the systems here felt strong.  Graphics feel nice and clean and the SFX has good pop to it.  I'd say it's overall solid!

Nice concept for a game! A mixture of ghostly possession of objects and stealth. It's a super ambitious project for the time-span and overall comes across as an interesting sorta puzzle-stealth game.

The graphics in this are really nice and communicate the important aspects of the game pretty well. Great use of sound for feedback.

Some issues I had with the game:

- Movement while possessing a present felt inconsistent, which made sneaking past places where timing mattered more difficult than it needed to be.
- I'm not sure chasing really added much to the game, might be better off just having the fail state trigger the moment you're spotted.?
- Any area which has synchronised moving enemies is put out of sync after a chase and fail, which potentially results in stages that are impossible to clear.
-The pathfinding seems a little buggy, which can result in enemies getting stuck on walls or objects.

Other than that for expanding the game further I feel like there'd need to be a wider selection of interactive objects; right now it just seems to be a TV. Something that could add to the puzzling element. As it is right now it's pretty interesting so solid job.

Movement probably felt inconsistent due to the fact that it’s slower while you’re over carpet. This was a near-last minute adjustment which was made to give the levels some added depth when traversing, but it may have ultimately been unwise.

I actually disagree about the chasing - I find stealth games where punishment is instantaneous to be frustrating. Widening the spectrum of failure allows for more tension and less frustration - at least, ideally. In practice, however, pathfinding cost me an immense amount of time to implement and frequently does not function - it’s the game’s weakest aspect and I’d likely have been better off dropping it entirely, but it’s hard to make backwards decisions when you’ve got so little time, hah.

While levels can be made unclearable in other ways, misaligned cycles shouldn’t ever cause this - after all, if they can be misaligned, they can be realigned. That said, this makes for a more tedious experience, so it’s still a problem.

Ultimately, time was a big limiting factor in expanding with new mechanics. I think I should have dropped moving NPCs early on - this would have saved me an immense amount of headache.