Manual Operations of gun
Submitted by jetstreams — 2 days, 5 minutes before the deadline
Add to collection 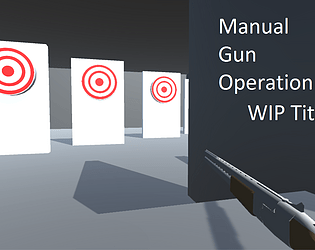 It's okay. Guns are missing a little bit of a feeling to them.

It's a start! I would play a fleshed out gunrange simulator, with a bunch of different types of firearms and realistic reloading / magazine handling, etc. You should keep it up!

I don't know what to say about this but I want to let you know I played it and that I hope you keep the progress up!

Hey there! I like the idea of what you have got going here, partly because I sketched up something similar in smaller myself hehe.

I'm not the biggest gun nut myself, but the shotgun's iron sight and barrel being unaligned felt weird. I did like the chunky head bob, although I usually turn stuff like that off. Removing and inserting bullets felt snappy, once you got a hold of the buttons, which I'd already call a big plus.

I haven't played any of the Receiver games myself, but I only remember seeing people stuck in slow animations. Speaking of which, the pistol one's appear to be janky, so make sure your animation states don't jump between each other unwanted. For sound, use events at specific keyframes to trigger callback functions, and trim your sound if needed. That way you can sync sounds specifically to visuals, and you don't have to manually fumble with timings.

So, to wrap it up: I really like the base idea, so keep it up! I can see past the jank, but don't forget to do some clean up as well! Happy deving! ((: