Underwater 3D platformer where your mission is to find a sea creature with your Submarine
Submitted by Subhajit Adhikari — 11 hours, 22 minutes before the deadline
Add to collection 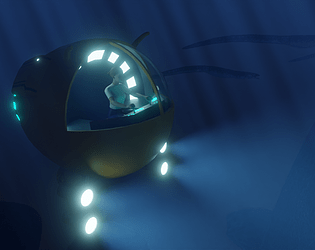 Wow this atmosphere is INCREDIBLE!!! All the models look great too! The sound design is well done as well as the particles.

There could be slightly more story, maybe something about the creature and why the player is so motivated to find it (for example their parents looked for it and everyone thought they were crazy for it and they disappeared on one of their adventures. Now the player wants to avenge their parents).

One of the issues I found with the game is that you allow the player to move on before collecting all the orbs in the area. In the first area, there are 5 orbs but you only need 4 to continue. So I continued with the 4 orbs and was stuck with 7 in the next area. Then went back and got the 5th from the first area (my 8th) and finished the game. So make sure the player has all the orbs before continuing, either make the saw cost 5 orbs and the drill 8 or have a counter showing orbs in this checkpoint in the top right corner. Unless possible backtracking was intentional then it's fine.

Another very small thing I found was when the player first starts to move the submarine the sound plays immediately on press and sometimes like clicks? Maybe just make the sound quiet at first and then ramp up to fix this (the ramp-up would be similar to the propeller accelerating)? I'm very new to game development and have mainly focused on the coding side so I'm not sure if this would work but just an idea.

Overall this game is beautiful and polished extremely well. I could see it being ported to mobile as well with a simple joystick and buttons to activate the tools. With a few more modes added or some kind of replayability (Leaderboard with times? Randomly generated environment? Different maps? Multiplayer?) this could definitely be an even more incredible game :)

Thank you so much for playing the game and taking time out for writing such a helpful review. Appreciate your effort! yes, the artists did a great job in this game, thanks to them it looks so gorgeous. We'll be working on the other aspects that you have pointed out to further improve the game and in future games.

Super cute, love the atmosphere and the 3D modeling. It's well implemented as well. But a maze that narrow where you get penalized for touching any wall is just way, way too punitive (especially since there don't seem to be many ways to regain health). I'm sure I'm not the only person who just painstakingly moved around one tiny nudge at a time and still ended up losing a ton of health.

Thank you for playing our game and leaving feedback! Yes, maneuvering is the challenging part of the game and was intended. We might give the player more rewards for completing the level, like regaining health once the checkpoint is reached. That way it can be less punishing.

Loved the Intro, pretty good graphics ,smooth movement, found myself struggling through the gaps ..🥲. Would have been easy if collider was a little smaller.

Thanks for playing the game and leaving such a lovely review

I couldn't find the 4th crystal thing. As already noted, a map showing at least where you've already explored would be helpful. I liked the thing at the beginning where you were looking at your laptop in the first person with those delightfully silly hands in front of you. It would've been good if there were more elements to keep the player motivated to carry on playing e.g. interesting graphics, story, music etc. The visuals and sounds during the actual gameplay, while reasonably polished, felt a bit mundane to me.

Thank you for playing. Yes I agree a map would be a great to the not make the player frustrated for not finding the crystals.

Overall, interesting gameplay loop. A few notes about my experience.
1) I was having a weird sound bug when I released a movement key; almost like the sound speed up to end it at that moment or something? It mad a very loud putter like sound.
2) Great UI start! The only grip would be implementation of a map or something, to know where you have gone or not. I am alright in maze like situations, but I know a few of my friends who would like this who can get lost in a hallway in a game. You could theme it as a sonar map, which would give that sonar sound more reason to be there.
3) Probably put the 'first' fragement closer to the note about it? I didn't realize how to use the items (as in they are automatically used if they touch the thing); and that slowed down my gameplay as I skipped multiple fragements not know what they were or how to collect them.

Was pretty fun when I found out how to play properly though!

Noted. Thanx for giving your precious time for these valuable feedbacks. We really found this helpful🙌

I'm really happy you loved playing our game. Your feedback is valuable. Thank you :)