Submitted by boymakesnoise — 1 day, 4 hours before the deadline
Add to collection 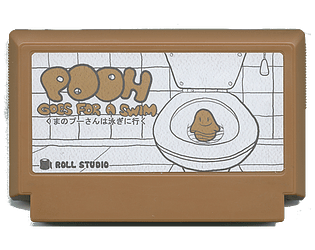 Thanks for letting me know. I've replaced the download with a zip file. Please let me know if you have any further problems.

Thanks for the new upload. It works fine now!

Gotta admit, my initial expectations for a game with that concept and name were rather low. But this turned out to be a pretty entertaining and elaborate (although rather difficult) platformer, maybe even one of the best of this jam. The monochrome aesthetics give the levels and characters a surprisingly cute look that is reminiscent of the NES era but still posesses a few characteristics that give it a unique charm, like the tilted perspective and the bubble particle effects that appear when you swim.

Speaking of swimming: the movement works pretty well. It seems a bit slow at first but once you get the hang of it, it's pretty smooth and even leading enemies into projectiles becomes manageable. That is quite a feat considering the whole game is an underwater level - usually something that many gamers don't hold in high regard.

The soundtrack is pretty compact but doesn't feel monotonous even after longer sessions and does a good job at conveying a sense of urgency that some of the more hectic sections of the game introduce.

All in all: well done!

Nice graphics, interesting game. I included it in my A Game By It’s Cover 2018 compilation video series, if you’d like to take a look. :)