A deck-building roguelike
Submitted by gridbugs — 1 day, 10 hours before the deadline
Add to collection 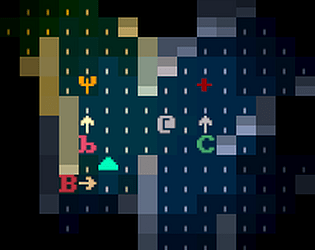 I love the lighting effects on this one -- the presentation is nice and clean, and there feels like just enough variety with the enemy design. There are clear and obvious differences between the three enemies I encountered, and the capital/lowercase to health symbolism was super clear.

I also really like the idea of the card mechanic defining your spells and special moves. However, during my playthroughs, I had a pretty bad experience actually using them. Because the maps are so large, and because movement costs power, I ended up burning through all my cards, most of them unused, long before I found the stairways or encountered all the relevant enemies. This, combined with the fact that many of the cards are pretty low impact, meant that I ended up paying WAY more attention to just moving around the map than I did using the cards. Honestly, I would LOVE to see what this game looks like if movement doesn't cost power. I think it would be a easy way to let the cards and their abilities shine.

Thanks for making it!

Thanks for the suggestion! I'll try it out.