Uncover the hidden secrets of the lost temple of Aztlan!
Submitted by Slappy Inc (@SlappyInc) — 4 hours, 8 minutes before the deadline
Add to collection 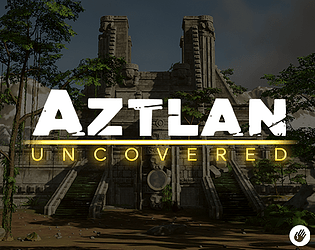 Left joystick: character movement
Right joystick: camera movement
A to jump
X to interact with objects
Right Trigger to shoot.
Left trigger to aim
Right shoulder to switch between running and walking
Push down left joystick to sprint.
Double B to roll

List any content that was created before the jam that was included in the final submission.
List out any assets that were not made during the jam

Advanced LocomotionSystem. - We used a heavily modified version replacing the character, functions and couple of animations to fit the needs of the project.
Fonts
Drone Model. - Downloaded and modified. New UVS and texture, rig / skin and animation all done by us for this submission.
Megascans. - We used a couple of megascan decals all around the place and 1 or 2 meshes which we retextured to fit our art style.
Aztec Scans. - CCo scans we modified by retexturing and sculpting over them to fit our stylistic needs.
Tropical jungle pack - Modified textured to fit style.

Congrats! I haven't played the game but it looks great!

That would be great if there was some character voice performance,
in that case the game would  become AAA game

A really beautiful and very well made little game. I overall like the puzzle ideas. I was not able to finish it, but I did still had fun trying it. Overall a really good jam game. Well done.

Submitted
I know he did it
LikeReply