This week is a wild one. We’ve got movies, we’ve got criticism, we’ve got smart games, we’ve got (seemingly) dumb games. More than any other week, I feel like we’ve got something for everyone here. What makes this week so great? Read more to find out!

I’m always happy to recommend a new game from the team at Rusty Lake, but this time I’m also recommending a short film. Yeah, consider this a 2-for-1 recommendation.

The first part of Cube Escape Paradox is a room escape game. Fans of the Rusty Lake/ Cube Escape franchise will be right at home with this one. The series’ beautiful-yet-unsettling art makes its return alongside the genre’s best point-and-click puzzles, but where Cube Escape really shines is its mysterious narrative.

And this is what brings us to the second part of this recommendation: the short film. Now, technically when you dive into Cube Escape Paradox you’ve got 2 chapters of game, and a half an hour long film. What makes this unique is that all 3 of these pieces take place in the same room, and redefine the space throughout each play/viewing. The attention to detail in the film is impressive --and in the interest of avoiding spoilers-- deceptively important. If this is interesting to you, the short film is embedded above, and the first piece of the game is available for free, so make sure to check them out. 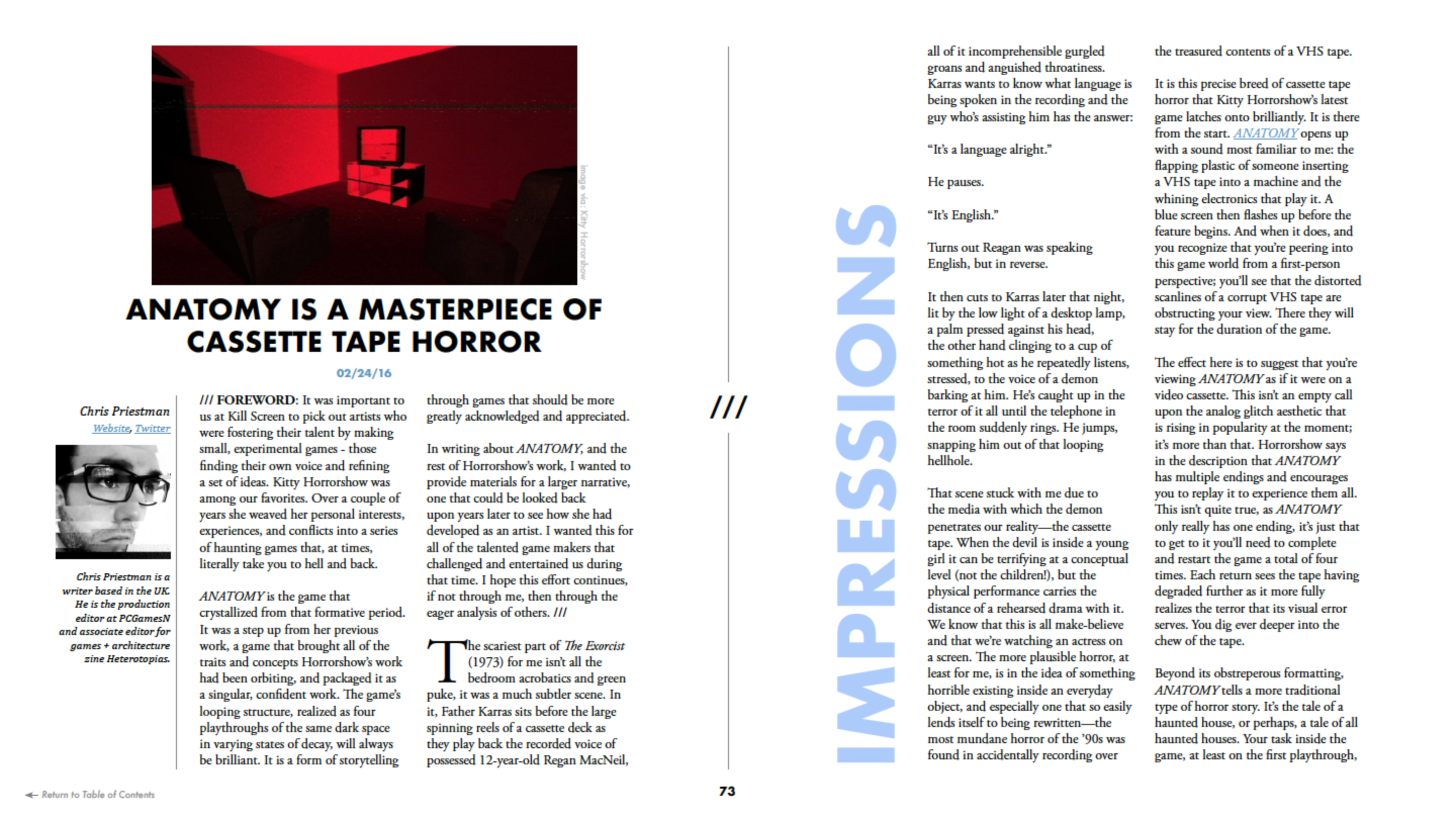 This one isn’t a game, but it’s something that everyone reading this should download. For several years the crew behind the zine-turned-website Kill Screen were producing some of the best writing on video games around. Unfortunately the site “refocused” and moved away from editorial content and for a while it looked like the awesome work done by the Kill Screen staff for years was going to fade away into the sands of time. That is, until DED LED.

DED LED is a collection of some of the works that appeared on Kill Screen from 2013-2016 presented by their original writers. It’s a great look into some of the best writing from a bygone era, and features some genuinely insightful work. I understand that reading this you might ask yourself “why would I want to read old criticism from a defunct website” but there’s a real joy and thoughtfulness in this compilation that you’d be worse off for missing. 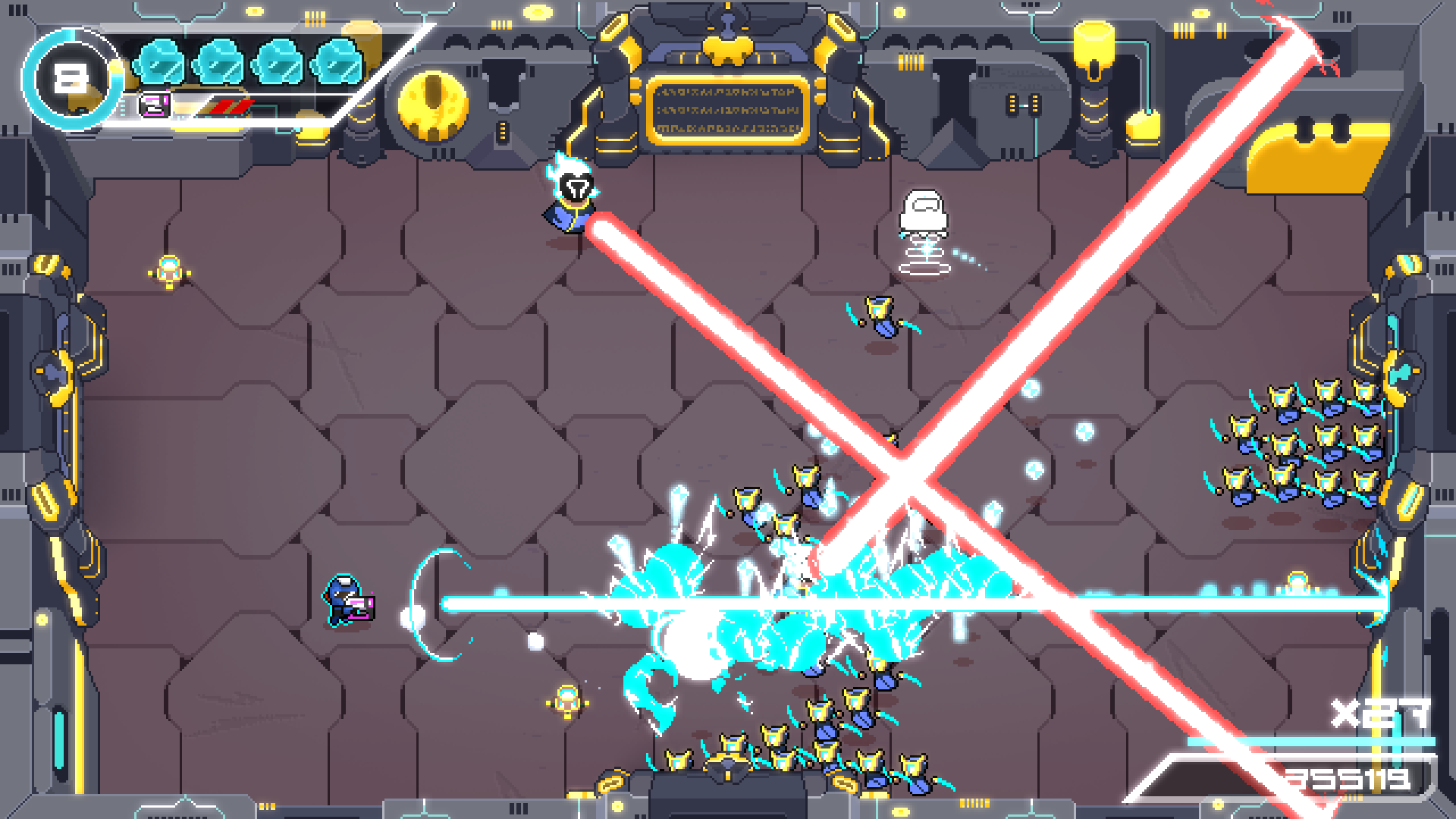 I love Smash TV, and have many fond memories of playing the Running Man inspired twin-stick shooter on the Super Nintendo. There was something Totally Radical about competing in wild bloodsport for the chance to win a VCR that really appealed to my 6-year-old brain. These days, I pride myself on hunting for games with substance and meaning in them but as I found out from Galaxy Champions TV: there’s still a large part of me who’s down to mindlessly jump into the murder pit.

Galaxy Champions TV doesn’t shy away from the fact that they’re influenced by Smash TV as I counted no less than two references to the classic on their game page, but there is way more in there than they’d lead you to believe. Sure you’re pointing a gun in 8 directions hunting for hundreds of enemies and of course the game is all about making you feel Totally Radical again but I’ll be damned if Galaxy Champions isn’t one of the most satisfying shooters around. Every weapon feels like a powerful reprieve from how fragile your character is while you have just enough juice to collect the next way to dispatch your foes. Oh, and did I mention there are random power-ups between stages? Unlike what we played as kids, there’s a light roguelike progression between rooms that adds even more replayability to the mix. These upgrades don’t change the core game much but the joy of seeing your dinky base guns change to screen-shake inducing mega-shotguns is worth experiencing.

Galaxy Champions TV is a brilliantly designed experience that tries (and fails) to convince you that it’s just dumb fun.

What are you playing this week? Let us know in the comments below.