Games of the Month: Disc Room, Cube Escape, Lucifer Within Us, and more!

It’s been feeling like it’s impossible to keep up with all of the good games released these days. Seems like every week there’s another game coming in from left field ready to eat my free time with the voracity of a black hole. Below are some of my favorite games that I got a chance to play this month.

The crew behind Minit are back with another stripped down take on a classic genre. This time they’re reinventing the twinstick shooter. Disc Room moves beyond dodging and shooting to become something greater. The first big change you’ll notice is that you can’t actually shoot. Yes it’s a twinstick shooter with no shooting. You’re trapped in these small rooms with the game’s titular saw blades and dodge as long as you can while things get increasingly erratic. What makes the game grow is just how varied the discs can get. Without the requirement that enemies shoot, the team was able to spend all of their time making each enemy’s movement as interesting as possible.

On top of all of this is a style that just won’t quit. The music is some of Doseone’s best, and the art lends a sense of whimsy that makes it hard to stay mad at the game for killing you hundreds of times. And let’s be clear: you’re going to die hundreds of times. This is a time-attack game at its core and trying to hang on for just a few more seconds is where the real fun lies. Pushing yourself right to the disc’s edge is some of the most exhilarating gameplay I’ve enjoyed all year.

Get out of a room, another room, another room, 9 of the best room escape games of all time have been bundled up in one convenient package. Fans of the surreal, the spooky, and the strange will be right at home in this expanded world. All 9 games form a shared universe with the developers’ follow up Rusty Lake series so there’s a level of ambition here outside of just getting out of a handful of rooms. Yeah each game is more-or-less about finding your way out of the most complicated locked rooms imaginable, but going back through each of these games I was continually impressed with how creative the team gets with both the takes on the games’ shared settings and the solutions to the puzzles.

If you’re not a fan of point-and-click games or puzzlers I can’t imagine you’re going to find a lot in here, but everyone else is going to have a great time. In addition to being a survey of just what’s possible in the genre it’s also a fun way to look at the skills of a team sharpening throughout their oeuvre. Hopefully this release means there’s a new Rusty Lake game coming soon. 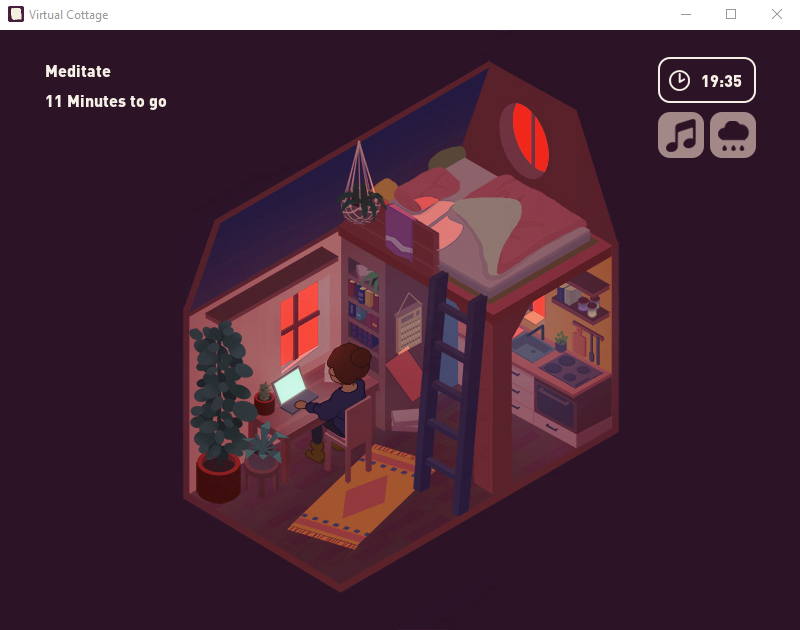 I’ve been working from home for most of my professional career, so I’m pretty good at navigating all of the pitfalls that come with the territory. I keep seeing folks stumbling adjusting to their work from home lives in these Unprecedented Times. Chief among these metaphorical rakes that people step on is handling all of the distractions that live in your home setup. Now there are a million programs out there dedicated to taming this mess, but none of them are cozier than Virtual Cottage.

Now when I say coziest, I mean coziest. Virtual Cottage doesn’t do much that’s going to shock you-- you type in what you’re working on, how long you want to work on it for, and then you’re off to the races-- but instead of staring at a clock ticking down you’re listening to lo-fi beats and watching a character bob her head. Your screen gets taken over by a fake cottage in warm tones and you have sliders for the volume for your beats and rain sounds. And that’s it. There’s not a lot to say besides that, but it’s a free utility that can help a lot of people stay on track and you can’t ask for much more.

Twist your perspective, twist it even more, do it again, TWIST MORE. Manifold Garden is a game unlike any other, a game where up doesn’t have to remain up, where physics are more Escher than Newton. Sure it’s technically a first person puzzle platformer but to call it that would undersell what makes it special. Most of the game is about exploring surreal architecture and unlocking paths forward (and backward, and sideways, etc) through collecting weirdly shaped keys.

But that’s not all the game offers, yes you’re progressing through a series of puzzles but Manifold Garden is a game that’s easy to get lost in. It’s a game where the visuals are so striking that I couldn’t help spending time staring out into the weird gradient tinted world beyond. I mean it when I say this game doesn’t look like any other game I’ve ever seen. It’s not just the nonsensical building shapes and gravity swaps, but every screenshot looks like a dream distorted through a kaleidoscope with strange reflections bouncing around into infinity. Check it out if you want to get weird.

I think one of the most paralyzing parts of being empathetic is coming to grips with the realization that everyone you see is living just as valid, messy, and complicated a life as you are. Each car you see on the road, each house you drive past on the freeway, everyone in line in front of you at the store has a depth that you can only begin to imagine. Beyond Your Window is a game that fully reckons with that fact. You play as a passive observer looking out the window over their desk in a way that anyone who’s lived in a dense enough area will immediately understand. You stare in through windows to moments in other peoples’ lives. Looking at brief glimpses of them as characters who you’ll never truly understand, but seeing human moments that are both reflections of who they are and inflection points that shape them.

As I write this recommendation I’m looking out my own window over my desk, I’m seeing through my own windows into the lives of my own neighbors. Beyond Your Window nails this very mundane act in a way that feels refreshing. Sure there’s some level of fantasy here (I don’t think many of us live across the street from a game studio) but it’s so beautifully local it’s hard not to love Beyond Your Window. 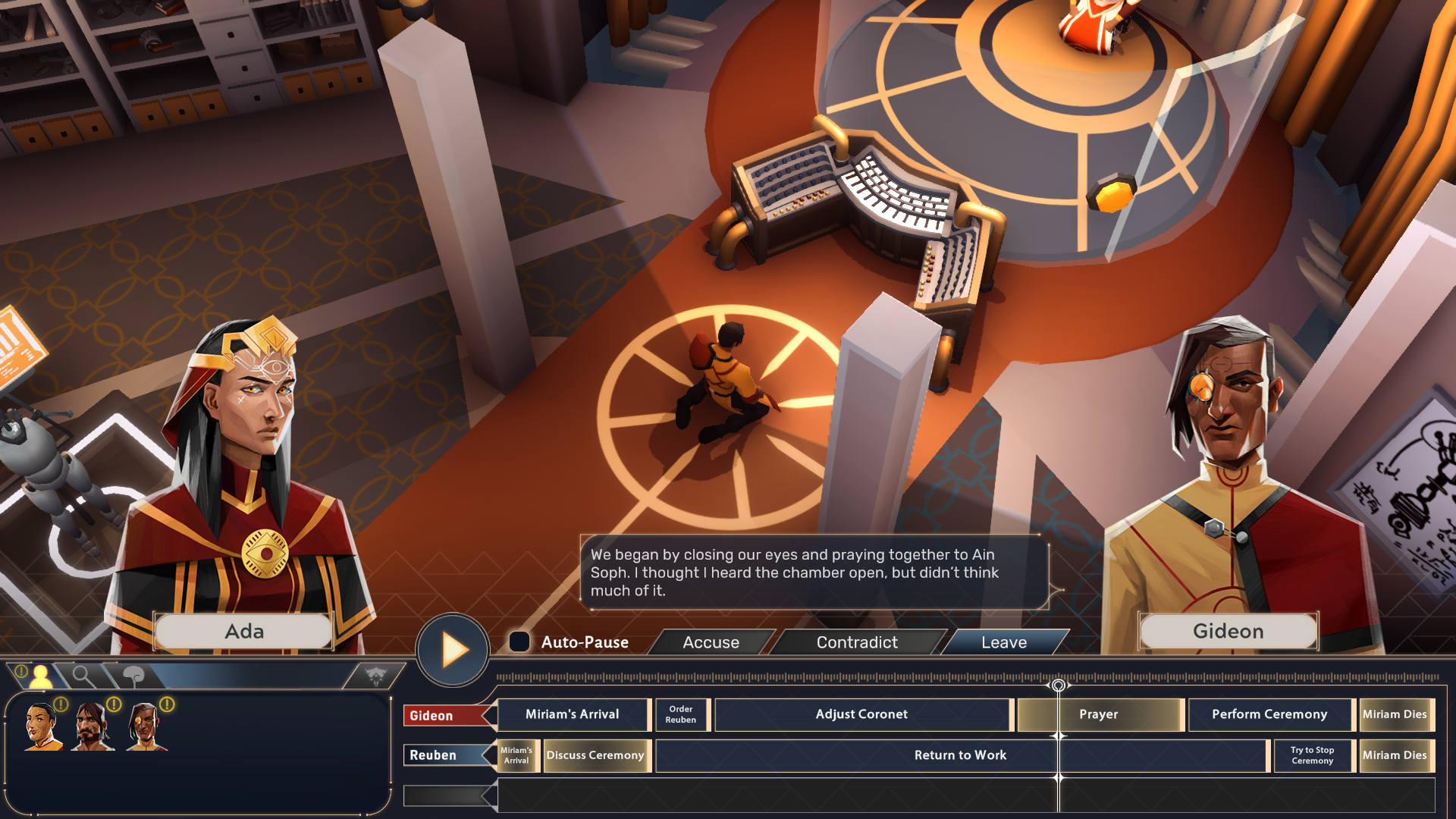 Fans of the blog know I’m a sucker for a good detective game. Good, bad, doesn’t matter; I’ll play just about any game about solving crimes that I can get my hands on. Even with all of this as a backdrop I was especially interested in Lucifer Within Us when I first heard of it.

Despite the potential inside of these detective games, a lot of games follow a familiar formula: get some lore, go out into the field until you get the required amount of evidence, the game tells you whodunit, repeat. I like this formula well enough, it’s cosy afterall, but Lucifer Within Us dares to break the mold with the most promising detective system I’ve seen in years.

Lucifer’s boldness comes in two halves, the ambiguity and the timeline. When you get to your Neuromancer-meets-the Catholic church themed crime scenes you’re given a quick overview of the scene and an introduction to a handful of characters who double as your suspects. You bounce back and forth between these suspects and collecting evidence from the environment and adding it all to a timeline that looks like what you’d find in a video editing program. You play recreations of suspect testimony and scrub along the timeline to figure out when someone is lying. It seems complicated, and I was a little intimidated at first but I quickly found out that it works really, REALLY well. Keeping everything straight is really easy and intuitive and plays into the second half of what makes Lucifer Within Us great, the ambiguity.

Even the best detective games tell you who the culprit is at some point. I get that doing the hard puzzling isn’t for everyone, and that sometimes you just want to mash the A button and get told who did it. Lucifer throws all of that at. At any point you can accuse one of the suspects and present your evidence. There is a right answer in each case, but the game progresses even if you’re wrong without much chiding. It’s refreshing to have a game let me be a complete idiot and progress.

While Lucifer Within Us isn’t a terribly long game (I beat it in about 3 hours) it’s a game I hope others look to when considering the future of the sleuth-em-up genre.

What have you been playing this month? Make your own recommendations in the comments below.

GIF
Disc Room
$14.99
Are you ready to get sliced in half?
Devolver Digital
Action
Cube Escape Collection
$4.99
A classic point-and-click adventure anthology!
Rusty Lake
Adventure
Virtual Cottage
A virtual space in which you can focus on one task at a time
DU&I
Manifold Garden
$19.99
Rediscover gravity and explore an Escher-esque world of impossible architecture.
William Chyr
Puzzle
Beyond Your Window
Four short stories about apartments, choices and love.
Team SolEtude
Visual Novel
Lucifer Within Us
$20
Solve murders as a digital exorcist.
Kitfox Games
Simulation