Welcome to the first itch.io digest. If you have any questions or comments about the email visit our thread in the community.

Kentucky Route Zero by cardboardcomputer [$12.50, 50% off for the next week, Windows Mac, Linux]

Kentucky Route Zero is a magical realist adventure game about a secret highway in the caves beneath Kentucky. It is being released in 5 acts. Act 4 has just been released today, and you'll get access to all the acts by buying on itch.io.

We've been pretty busy! We recently added saved credit cards to make things more convenient to purchasers. It may not seem like a huge deal, but we're sure those of you who don't use PayPal for transactions will appreciate not having to enter 16 digits every time!

Secondly, Amos released a big new version of our desktop app, itch. If you don't know what itch is, it's the best way to get and play anything on itch.io - check it out!

For those that already have itch, you'll be prompted to update to v18 to get access to:

You can read the big changelog and everything else about the release here.

In other news, PC Gamer included us in their awesome article comparing different storefronts.

"Ravenfield is a singleplayer battlefield style game. It started out as an experiment with ragdolls and AI, and will remain a slightly experimental, for-fun game project." 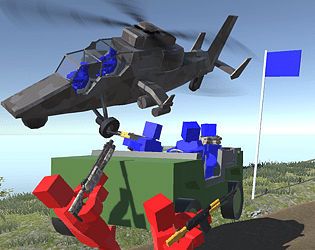 "As the cyborg soldier Nia Rhys, you'll hit subsonic speeds thanks to the BLade Assisted Surface Traversal (BLAST) system. Blast along the floor, up walls, and across ceilings at breakneck speeds to gain positional advantage on your foes. Blast and slice your foes to bits from every angle!"

Game jams to check out

The Mystic Western Jam by Juegos Rancheros recently finished and a handful of really well made games resulted. You can check out the entries here: https://itch.io/jam/mysticwestern/entries

That's all for this week, see you next!