itch.io Recommends: a double-dose of adventure!

Set sail for adventure with this week’s itch.io Recommendations! This time we’re heading underground and underwater with a pair of games that look for exploration through mechanics. If you want to go diving, Nauticrawl is a complex submarine adventure, and for the spelunkers among us, Noita is a roguelite that lends itself well to antics. Check out all of the details you’ll need for a great time below. 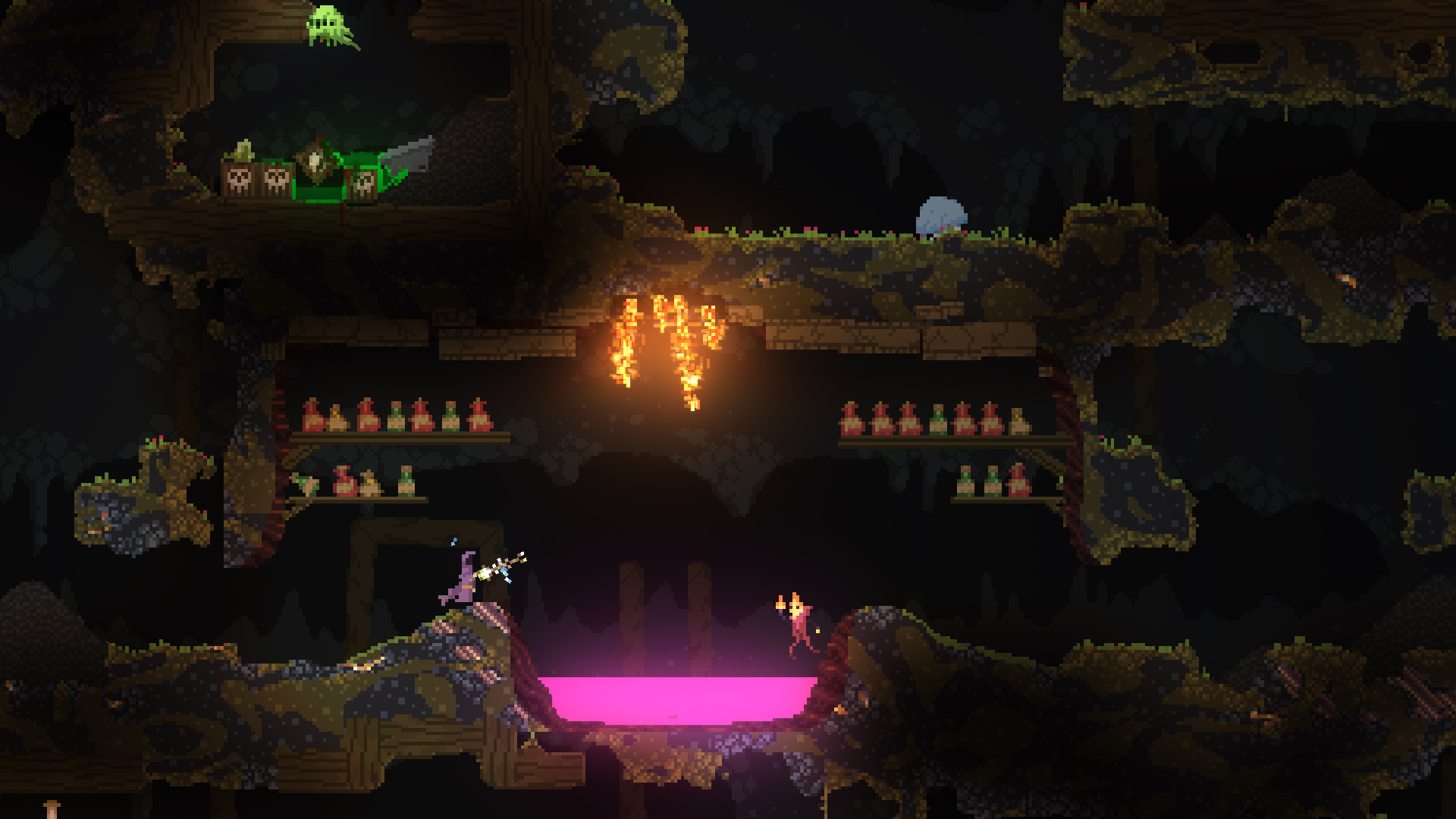 I had a friend try to sell me on Noita before they were really ready to talk about it. “You’re like a pixel wizard or something, and you do magic” they said, “But everything else is pixel-y and also has physics? I think? It’s wild.” Somehow this was enough to sell me and I began to track down what exactly Noita was. As far as I could tell it was a mishap-simulator, but the game is finally out and ready to explain exactly what is going on.

Most of the time is a roguelite platformer with all of the usual trappings of the genre: random levels, enemies, and a clear goal to go further down into the world’s murky depths. And it does all of this well enough while you’re doing some wizardly floating and slinging spells left and right. If this were all Noita did it would be a fine but forgettable game. Where Noita really makes a play for your time and money is the pixel physics that my inarticulate friend told me about. The spells and potions you’ll find along your quest produce a variety of effects on the world. Some are as straightforward as exploding the ground around you (which results in an avalanche of dirt particles) but others get weirder. Early on in my adventures I found the game’s version of a polymorph potion. I accidentally threw it in front of me which caused it to make a giant pool on the platform ahead of me. Naturally I was curious so I hopped in and my wizard turned into a strange sheep-looking monster with the wings of a fly. After a few minutes I reverted back to my human form and started to experiment. What would happen if I blew up the ground near the pool of polymorphing juice? I chucked a bomb and let the physics take care of the rest. Potion went flying everywhere including on the mass of enemies in the platform below my makeshift polymorph cauldron. These enemies were then turned into sheep and were primed for me to start dumping fire and acid spells down onto them. Of course this meant that they then caught on fire, started running around, and lit more of the level below me on fire which cascaded into even more flaming enemies.

This kind of madness is exactly what Noita revels in. When things are going well you’re like a mad scientist dropping all kinds of weird ingredients into your explosive chemistry set and seeing how things shake out. I haven’t made much progress toward whatever Noita’s endgame is, but moving through the game as a tornado of cascading pixels and nonsense is enough for me and I suspect it will be enough for you too.

Being trapped underwater sounds like possibly the worst way to go out. Just sitting there miles below the surface waiting for your air to run out is the kind of slow death that has captured the imagination of artists with reliable frequency. Nauticrawl is the newest game in this tradition, if only by accident.

Dying isn’t the express goal of Nauticrawl (that’s exploring the ocean floor in your supremely janky submarine) but it’s the norm in Nauticrawl. The game is entirely played on one screen filled with knobs, levers, and dials which are the lens through which you view depths of Nauticrawl’s world. It’s completely obtuse and asks you to do everything through these very mechanical interactions. Want to go somewhere? That’s going to require you to power up the craft, start the engine, begin building steam by controlling two separate levers, managing heat from that steam, turning on the monitor, pinging the sonar, then finally pulling the thrust lever once you have enough steam. If that sounds exhausting it’s because it is. Remember when I said you’d die a lot? If you mess up any part of that loop, you’re going to run out of power and have to eject to a watery death.

Because of the game’s opaque controls --none of which are labelled-- I ended up dying several times before I even figured out how to start the engine of my submersible. In honesty, it was really frustrating and I almost bailed on the game but once I started figuring out how the controls interacted with the (also unlabelled) gauges and got crawling in the depths I started to get sucked in by the mystery of the world. With so little information about the world around you everything is giant,dark, and dangerous in a way that few games can match. I’m not sure how much is lurking in Nauticrawl’s depths, but if you want a game that is tough to master and challenges you for every inch of progress then Nauticrawl is ready for you.

Noita
$19.99
A magical action rogue-lite where every pixel is simulated.
Nolla Games
Action
Nauticrawl
$14.99
A stolen, enigmatic machine is your only way out. Puzzle out how to pilot the Nauticrawl in this atmospheric adventure.
Armor Games Studios
Strategy