Edit: as has been pointed out in the comments below by epidemian this only effects JavaScript ran using node. The same test in a browser gives much more expected results. Thanks  epidemian!

Edit2: the performance of for of loops and for each is now much more equivalent in newer versions of node. But the standard for loop is still significantly faster.

Most of my game projects are written for the web using JavaScript (or more specifically TypeScript). However I was recently made aware of how much slower many of JavaScript's functional style routines are compared to their non-functional counterparts. It saddened me.

As an example lets compute the sum of all the elements in an array squared.

We will then compare:

I've plotted the results below as a summary. 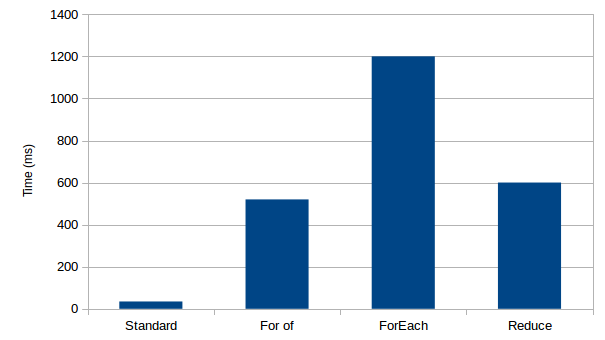 I found this very surprising.

I typically argue for a simpler, more readable programming style over eking out every last bit of performance for performance's sake. However these results have really made me stop and think about using this more functional style when making games in JavaScript. Which is a shame. It's really hard to argue for a nicer coding style when its around thirty times slower. Especially if it's a style widely adopted throughout a codebase.

It's worth noting that  many uses of JavaScript aren't looping over large arrays and processing lots of maths. They typically handle button presses and AJAX calls etc. In these cases it isn't really an issue and the nicer coding style wins. However, for games, this is very common i.e. for all the objects in the world etc.

It's also worth noting that this is very much a micro benchmark. So the effect may be lessened in more real world use cases. It would be interesting to investigate this.

I'm hoping that updates to the JavaScript interpreter might, over time, bring down the overhead of using the more functional style. They've done a fairly amazing job making the standard for loop as fast as it is!

Anyway, thanks for reading. I hope some of you found this interesting / useful.

Kinda related, but something different.

You should reference the array you are looping through in the reduce method (or any other functional loop). Et voila, your loop is quicker. Don't even use the reference.

I wonder how this came to be, looking forward for a more in-depth post or article about this.

I came across this when reading this medium article: https://medium.com/@alexbeer/hi-nice-sum-up-of-different-duplicate-filters-eb4d3895fd14

It's worth noting that, although the numbers on Node.js are quite bad for forEach() and reduce(), on browsers the story is quite different. Chrome yields pretty similar numbers for the four snippets, with reduce() even being slightly faster than all the alternatives:

And Firefox yields impressively better results, having reduce() also at the top:

So, as it usually happens with these sort of things, it's not a matter of "forEach() being slow". It's a matter of different JS engines applying different optimizations. In general, i think it's better to stick to the most idiomatic or clearer alternative. Not only does that make the code more readable, but there's also a high chance that those idiomatic patterns will be optimized by JS engines in the (not so distant) future.

Only on cases where we have actually measured a performance impact on the target runtimes we want to run, it'd be adviceable to go for the more "performant" but less idiomatic/readable solution. And even in those cases, i'd recommend leaving a comment explaining why we went for a less idiomatic solution, just in case JS engines catch up and it stops being the case that that is the most performant option :)

Just tested this. Yes my results are similar to yours.

The difference is that the forEach closure is writing to a bound variable. If you do the same thing in the for loop, it gets slow, too:

Note that the loops are identical. The only difference is that in the second block, we've bound sum to a closure. That makes writing to it much more expensive.

That's why your forEach loop is so much slower. It's the only code in your example that writes to a bound variable inside the loop. You'd get the same performance degradation in any of your other looping constructs if you do the same thing.

I think your test is not correct.

Take a look at this code. I'll use benchmark for testing and I'll extract the variables and the closure creation to the top of the script so they are not created in every test run, only just one.

As you can see, there is almost no difference at all and the reduce version is clearly the fastest

You've stepped into the trap that EricTboneJackson pointed out. By using sum inside a closure, write access to it is much slower. Because only one sum variable is shared across all your tests, this impacts all of them, despite not all of them requiring sum to be captured at all.

Then after performing these modifications:

The results are much more drastic.

So, the main take-away should be: Where performance is important, avoid unnecessary closures.