After about one hour, here is my first impression. I think it's important to give fresh feedback, and later more advanced ones, because many players don't bother "trying" more than 1-2 hours before giving up on a game. So...

+ Action/Move points, it's way better than the overused 2 Actions system, like the modern xcom do. Still i prefer a Time Unit like Xenonauts or OpenXCom or Enemy, but it's fine.
+ No Initiative, i can play my Marines in the order i want, like in the 3 excellent games quoted before.
+ I can interupt my Marine, play another one, and come back to the previous Marine.
+ Steam Punk in Space, even if i didn't see yet much steam, it's nice
+ Turn Based Tactic, my favorite genre i guess
+ Each class brings something, like Leader opening the door gives +1 action
+- Not sure if i like the line of sight being a cirle instead of a cone, but without the option to turn angle by angle, or walk backward and strafe like in Space Hulk, i guess it's fine.

- Caracter creation is ugly and confusing. Why should i click on a button to cycle Steam Marines class one by one, without being sure what is what ?
= Instead, have tabs with all class visible at once, and a short description of them

- The next screen i see, there are 2 Steam Marines, no mission, and the loadout options seem to do nothing. And i don't have money to recruit. So, i think i start with 2 SM. But i don't, i start with 4 SM, that is my main + 3 randoms. The game is randomized, alright, with permadeath, and i have almost no choice to start with.
= Give me full control of my starting team, and show them all on that screen
= Give me a starter mission (maybe a tutorial one)

- Perma Death. I hate permadeath, but in some very specific roguelike.
= Give option to play with "disabled SM". Medic during mission could rez dead SM without penalty, and after a mission, all dead SM are alive, but with a random -1 to a stat.

- The Galaxy Map is very dull, unattractive, ugly and useless. Why should i wait for my ship to navigate from place to place, when there is nothing worth to look at ? I just "waste" several seconds waiting for my ship to reach its destination. Also the map is very very very ugly.
= I would rather click on a spot to directly go there.
- Only one save ? What if i like to try something else, without loosing my current game ?
= Have several save slots

- The GUI needs rework, a lot.

- Tooltips for skills often show under the icons (see screenshot : 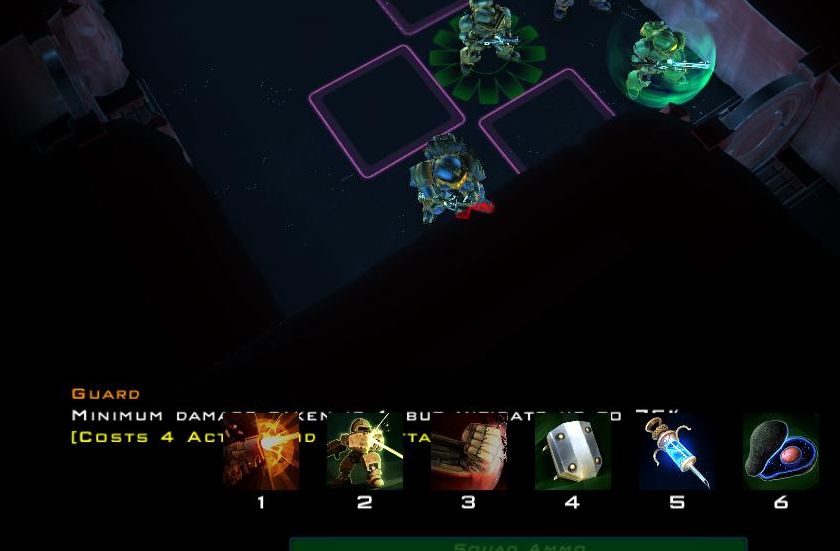 - With killcams, the screen is easily blocked by walls, tooltips, and other stuff on the way.

- At first the GUI was really huge, i had to find the right checkbox in the option to keep it under control... It was like this : 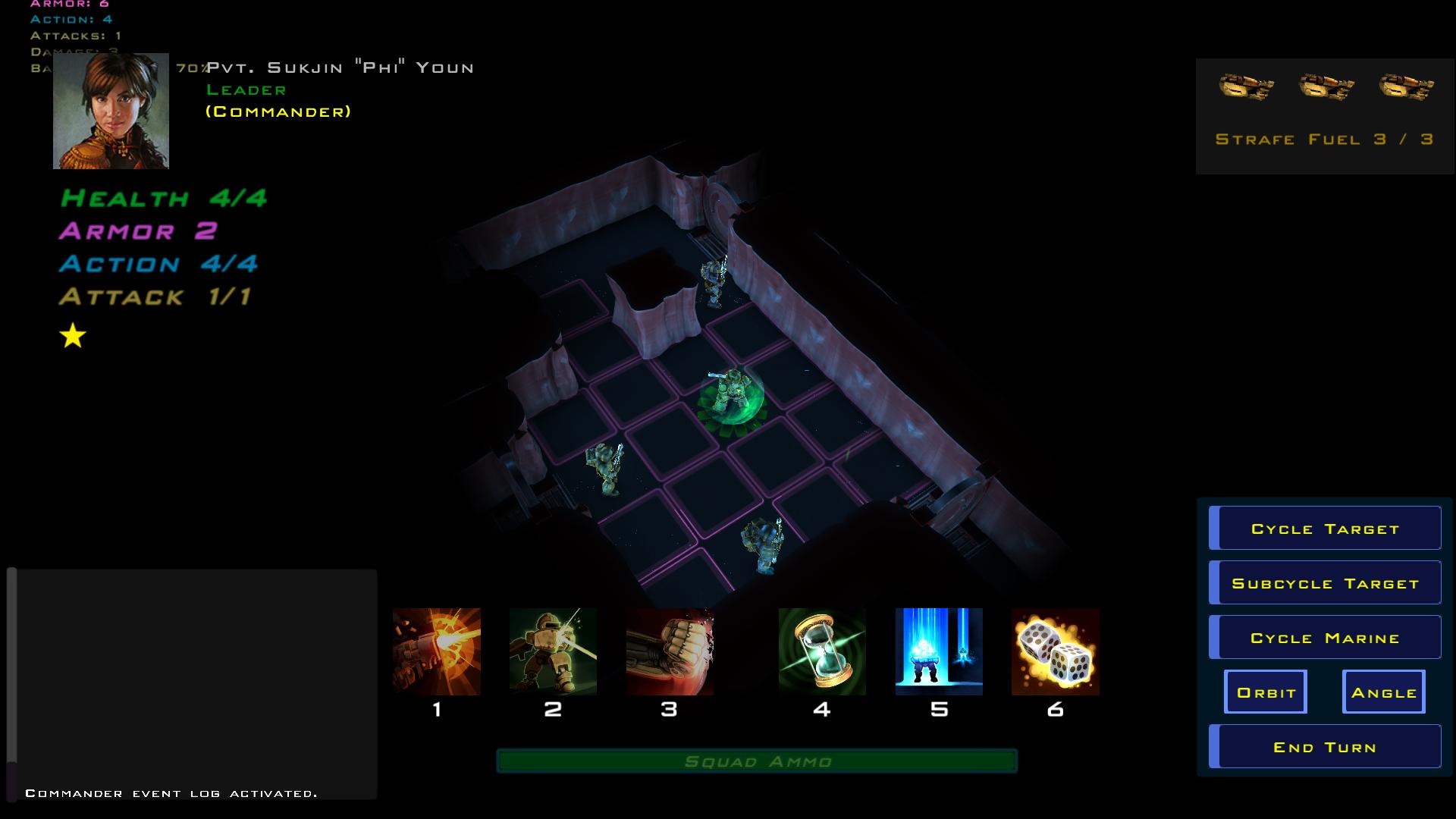 - targetting tooltips are... not well done, at all. Super confusing. Who is my target ? Sure i can guess, but it needs a big rework here, IMO. 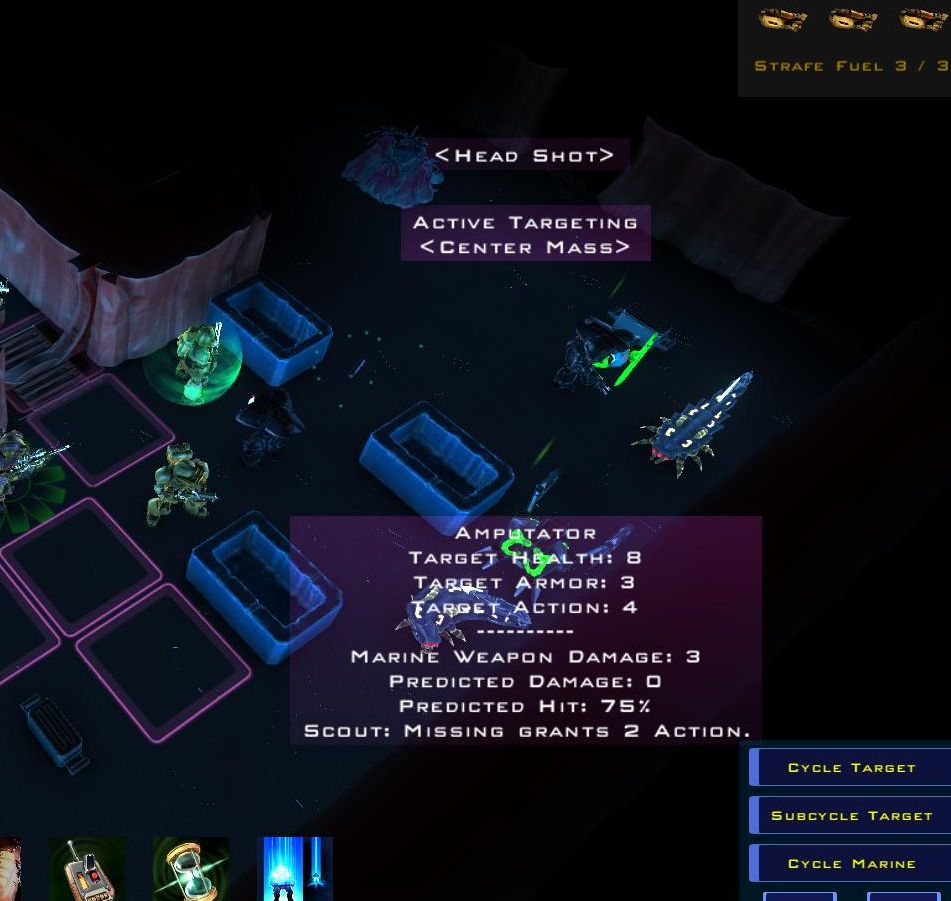 = improve the GUI !
= When the cursor is hovering on a skill icon, the text should show the special effect of the weapon, instead of having to look at the target tooltip.
= All icons should be unique based on the weapon and effect, like the Grenade Launcher, etc
= MMB should be used for panning the view, not switching between "angle" or "orbit" cameras
= All SM portraits should always be visible on screen, something like this : 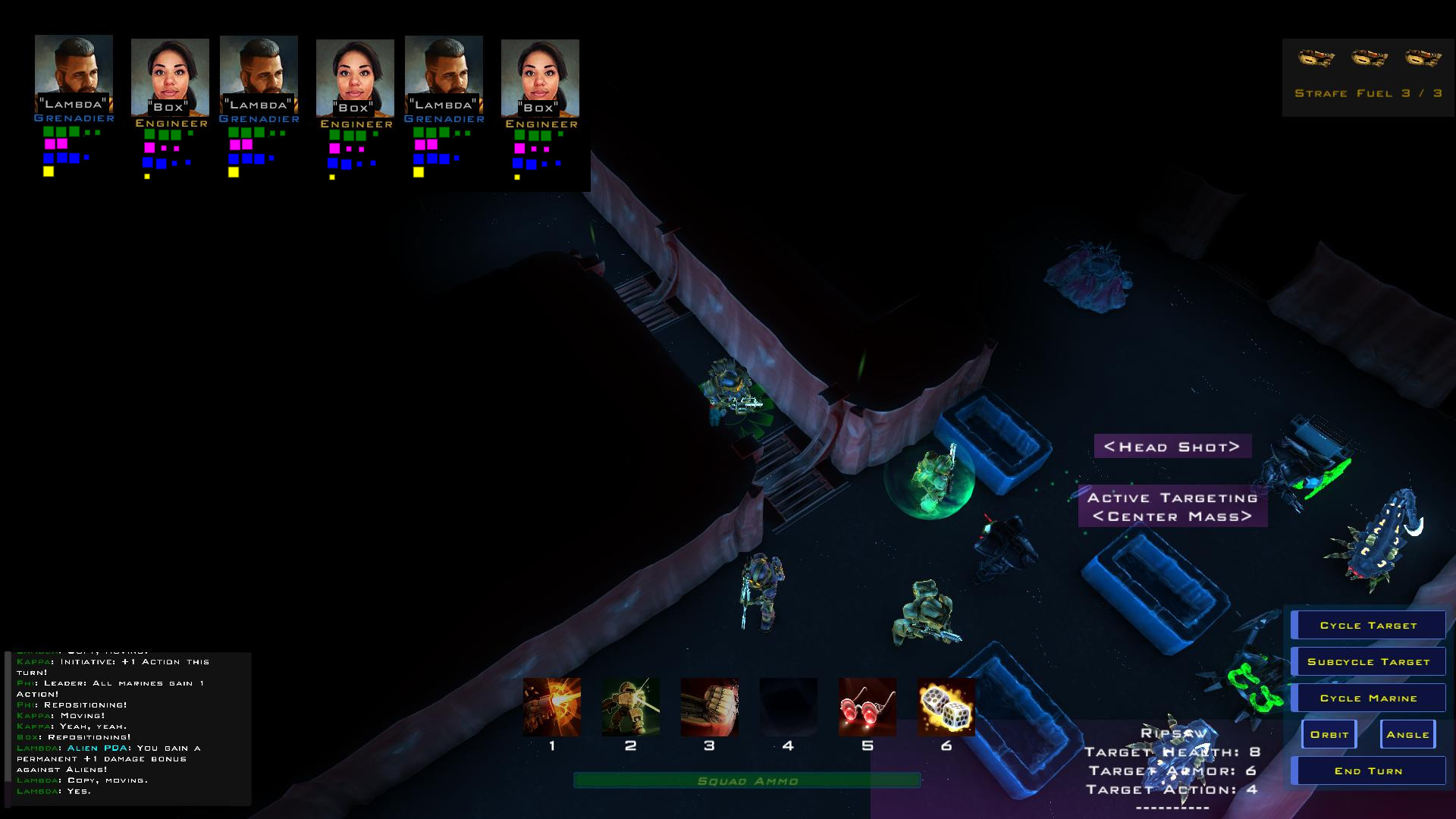 On this picture, large dots under portraits show the remaining, and small dots show already spent, so i always know my maximum potential. And of course, i just copy/paste to have 6 portraits, but they would be one per caracter...

- The Doors show (LMB) to open them, but i have to click RMB instead.

Thanks for all the feedback! I don't think I can address all of that individually, but I will speak about some of them more specifically, and I'd like to make a few comments on the overall design of the game to inform that.

Steam Marines 2 is intended to be a permadeath game. The systems are balanced around the player not reloading saves just because something goes wrong. This is unlikely to change.

I agree the user interface needs a lot of work: it's my main focus at the moment! A note: by default the action cam should be enabled, not sure why yours was not, but it does make the (default) targeting much more clear. I'm not sure why the tooltip is showing under your icons, or why the door tooltip is displaying an incorrect keybind - I'll look into that.

There are issues with stacking unit portraits on the tactical field the way you have depicted, specifically health, armor, and attack values are displayed as pips and can, as the game progresses, get large which means they run more to the right and would overlap the other portraits. I could stack them vertically (this is what I did in Steam Marines 1) but my main issue was that many players complained because 1) they found duplicated information on screen, and 2) they found themselves looking between the portraits and tactical field double checking. 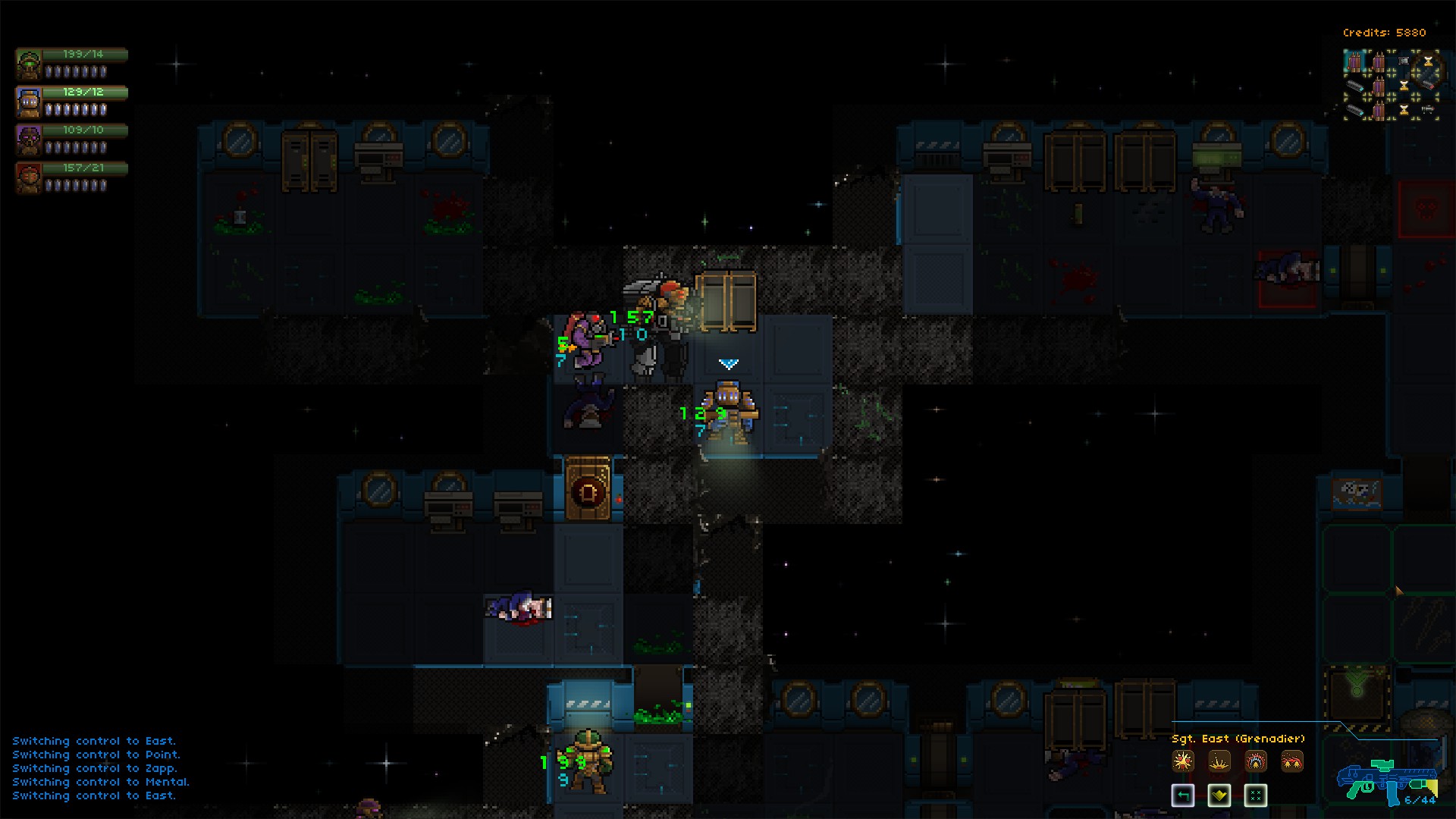 Creating a full squad at the start of the game was something I wrestled with in Steam Marines 1 as well. The main problems were that you could make the early game pretty degenerate, and this also tended to flood new players with too much information. 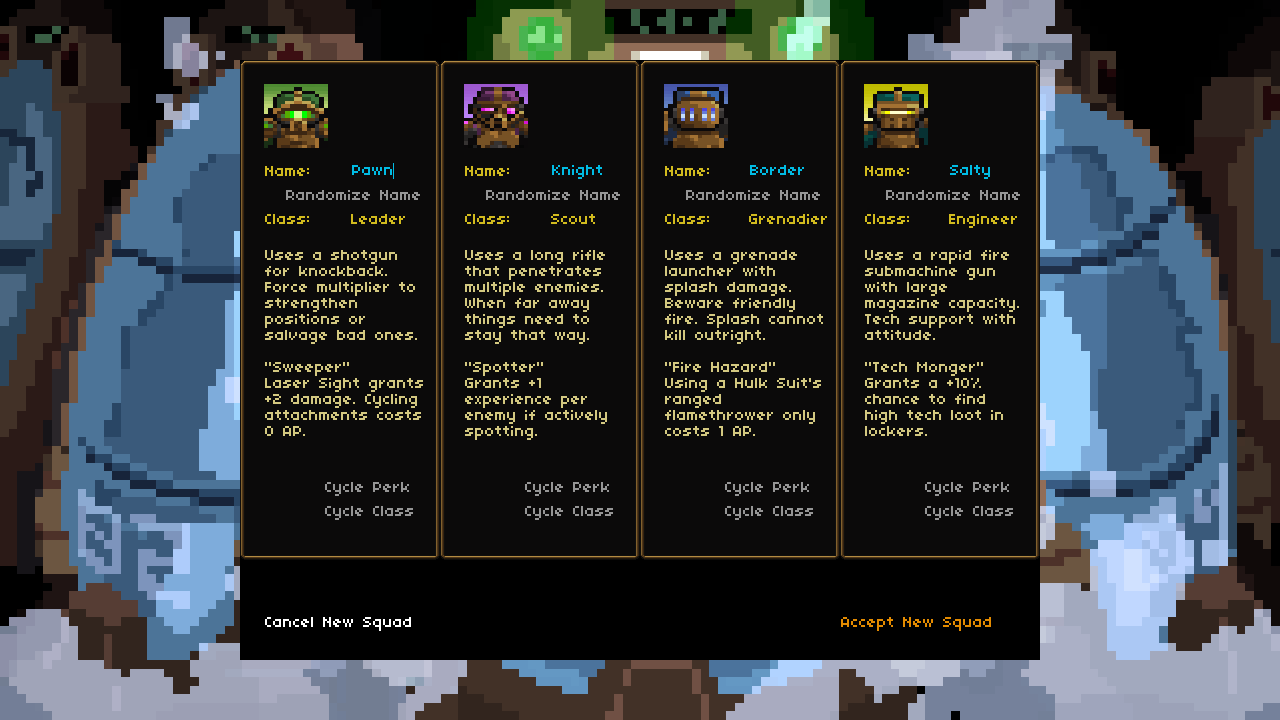 I'm not telling this to suggest you're wrong - a lot of this will be subjective from player to player. I'm just supplying my reasoning and past experience trying other things :P

I am very glad you gave me so much feedback about your user interface/experience impressions and I will definitely take that into account moving forward!

how long before the next update, more or less ?

Not sure if i should push myself to play the current version more, or wait a couple updates to have a more "playable" experience and write about it.

Probably a week or two, currently hammering out a new targeting UI.

It's been more than a month since then. How things are going ?

Probably another week or two: I ran into some issues with the new targeting UI that took more time to hammer out than anticipated.