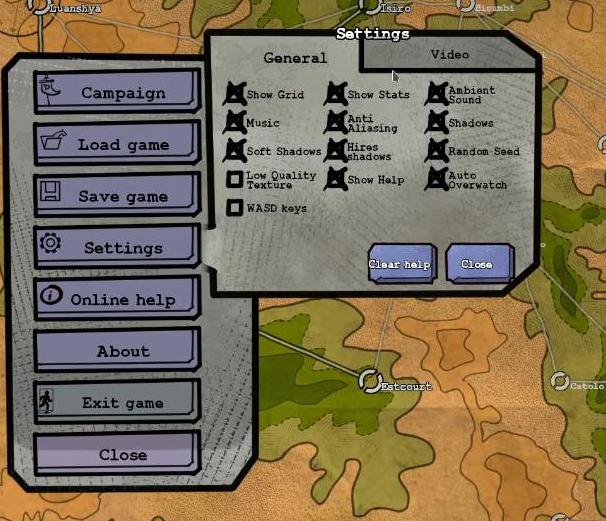 Thanks. Save compatible or needs a new game ?

It ends with a crash sadly, in the same situation as the previous crash. No message, nothing in the Linux terminal.

- Add an option to tweak music/sounds/GUI/effects volume, one by one

- Would feel really good to be able to go through windows, and jump over some obstacles.

- Plus other feedbacks i gave before, the more important one for me would really be the click the merc and drag to move, vs click the tile directly.

In the meantime, i figured it out, changing the version from the link.

The "optimum cover" algorithm seems to make the allies too afraid maybe ?

I don’t know, i’ve seen them run out of a building, around a corner, and next turn, more or less the same path but in to the house again, and next turn again... During this times my mercs were going to the next house to spot and kill an enemy without line of sight on the outside.

Tooltips to show AP, i mean, not tooltips, but like you do with AP per shot/burst/auto... It’s written on the GUI, so maybe just add to kneel and stand, the AP cost in a similar way ?

About tutorial messages, i mean the hints, like friendly fire first alert, or how to pan the view etc. They are removed as soon as i click or move the camera even with the arrow keys from keyboard.

Ah also, some features are not in the demo version, but in the Beta version ? Can i access the beta somehow ? Reserved for a Patreon or something ? Or simply not yet ingame ?

On Normal. The scraps sell for 14 i think.

I forgot, anyway we can control the NPC when battle involve allies too ? They often do... useless stuff, like running back and forth in/out a house, shooting at very long range almost always missing, standing in the middle of a street on my line of sight, etc. They are barelly good to keep some of the enemy’s attention...

About AI, enemy tend to throw grenade easily now, even if firing the gun could be more effective or safe.

Also, the game crashed once, i was doing nothing special, in battle, waiting for IA to end its turn, and clean crash to desktop without any visible message.

Something else, tooltips to show AP cost for Kneeling or changing direction ?  A way to re-read the tooltips from tutorial messages ? A way to remove the roof from buildings even if we are not directly inside ? A way to tell how well covers cover ? A way to reserve AP to kneel or shot, etc ?

Is XP shared between the mercs, or is it really only the one doing damage ? Some sharing would be nice, maybe 50% to the merc acting, and 50% shared in a common pool for the team ?

On the campaign map, see further so we have more time to hit Pause and turn back if the level appears to be too high ?

Do mercs heal a little outside of hospital with time ? I think i saw they didn’t but not sure.

Anyway we can jump over some obstacle ? Sometime it’s just a small broken wall, it feels really weird to have to run all around while it looks like a could step on it very easily.

In Mercs Tactics it’s different, but i feel i could easily waste a game not being "really good". Healing cost a lot, mercs and items are expensive and quite rare, and money is scarce. So a few bad steps could lead to certain failure without possibility of return. I simply want to be able to be just an average/bad player, and still have fun.

i never played a full game yet so maybe it changes later.

Good about the random map, i felt the games i played before (months ago) were within the same map, but it seems it’s only "similar".

I have more time these days i will see how far i go, if i go !

Faster, i mean having 3-4 mercs and a few items to use and spare. Currently, as a noob, i find it a bit slow paced to reach that point.

The Ctrl + mouse to check the overwatch only gives a very narrow vision, like 2 tiles large, that’s all the merc sees ?

About sneaking, then what about silenced tools and guns ? I’ve seen them ingame, so why i should use them if i cannot approach unnoticed ?

Challenge level is relative to player’s taste. I like more room to try and fail, vs have too little options if i fail one i mostly need to restart. I usually prefer one long deep playthrought more than retry more. It’s your game sure, but options > no options.

Also, how random is the campaign ? The map is always the same i think ? What about events ? Is the first merc always there to recruit for a gun ? The secord merc always there for 3500 credits ? The shops always in the same village ? The cellphone etc ?

Nice "little" game you have here, curious to see how it will grow. also, thanks for Linux support.

- I’d like a free camera as it seems it’s 3D anyway. Also, rotate with MMB maybe ?

- I’d like to (double) click to move, instead of drag the path, that’s the most annoying thing right now, for me. I often select a merc, find a spot to go, click, and... I can’t, i have to find my merc again, click and drag a path to the spot.

- I’d like to sneak/walk/run to do less or more noise and use less or more AP per move. Run could be 1/3 more distance per AP but can’t fire this turn.

- I’d like to see a cone or something to be sure what is in my field of view.

- I’d like to peak in corner, so i could fine from behind a wall, maybe more AP needed. per shot.

- I’d like to see an icon when i target an enemy showing my chance to hit as a raw number instead of a picture.

- I find everything too expensive. Healing cost a lot (400) before you can really afford it. Recruiting the third merc is 3500 while i have 2000. The second one with the gun was fine, as it’s "just" a good loot to give. Shops buy very low and sell very high. So as a begineer to the game, first couple of hours feel really slow and quite laborious. IMO, the start should be faster, to ease the introduction.

At last ! Yes. Also, any news related to a PC Linux native version ?

Nice so far ! Only one type of level, or pure bad luck in RNG after about 8 rounds it was always the same. I only played Classic vs computers.

What about giving the more abilities as the player brings item to the mothership ? Could be repeatable. An antenna to remove a alert level. A Radar to increase zoom level when flying up. A battery to have more energy. A paint brush to select a new color for the ship, for fun. A butterfly net to capture faster. An umbrella to increase sneak time...

Hi ! Something about thi GUI : add tooltips for everthing. IE, the big arrows with the sneak in between, bottom right, tooltip could say "lift", "sneak", "drop".

I’m not fond of voice and robot style. Could be simply "blibabjzz" noises so it’s international and way easier to fit with any text, keeping a comic aspect.

I usually find tutorial quite useless, and often over done, for many games that don’t actually need them. A simple page with some explanations would be enough. Less time consuming to work on, more time to actual gameplay.

What i’d like to see first beside accessibility options (key rebinding etc) is more precision en everything : target, flying, shadow to spot and be spotted, interaction etc. All feels a bit clunky.

Your page and game page are gone from itchio, did you change something, the name maybe ? Or it’s itchio bug ? Other pages and creators seem fine.

Maybe with a robe and a hat you can be more sneaky or something alike.

Hi, i did a short presentation in french :

Just so you know at least one person reads you. Keep it up !

I like the idea of the grey one looting house, but i don’t know looting what. Underwears ? Hats ? Something just for fun and changing appearance ?

Hi ! Probing Bob is fun, but following him, less fun, i think. It’s kind of reverse-escort mission, and i hate escort mission. Maybe just probe is enough, as we already have to find Bob.

Hi ! About mouse movement, would be nice i think if i could just hold LMB and the ship follows, without having to re-click everywhere everytime.

Hi ! Probe minigame should be more visual so people without sound can find the right spot more easily. Nice idea, looking for more !

Thanks for Linux support !

Bug or i missed something : after abducting Bob and scanning him for Uranium, i wanted to drop him at my base. Now he sits there, not moving, and i cannot recharge energy anymore, and i cannot abduct Bob again to move him away. I explored away, took a dwarf, sent it to my base, get XP for it, but the Bob guy is still there, locking me from recharging.

Hi ! Thanks for the Linux version. Could you add "soon" an option to remove screen shakes and flashes ? Cheers

Just for the record : it’s possible to play on Linux PC, but on my system, i need to install the game via WINE, then open Steam and add this as a non-Steam game, then play via Proton GE. Then, no issue. When it will be on Steam, it will be easier to use Proton directly. Tfhat’s just me, it’s probably possible to do some tricks but i don’t know, i’m just a basic player on a Linux OS. And of course, a native version would be very welcome.

Impressed ! At fist it was a fine little attempt to clone-ish a famous game, now it’s a very well thought similar but unique game with lot of charme.

Kudo to your dedication, updating this game little by little and keeping the crowd updated.

Hi, spotted a bug, sent via the google form, but here again :

Go to Unit Specs, upgrade any skill to 5/5. Switch to another tab like ammunition or equipment. Go back to Unit Specs, the skill is 5/5 and you can click + to go up to 6/5. Very repeatable, works (or breaks...) everytime i tried.

Hello, i think something is broken is this demo.

So first, i play on PC Linux via Proton, so it may be related, i don’t know.

1/ i had to remove the space in the exe name, and in the folder USCCounterforce_Data or i have an error.

2/ i can start a game, build my team etc

3/ start of the mission, i can see the main game screen, open the doors, move around...

4/ After i hit a larva with a rocket, right after i open the door at the start of the mission, i’m stuck. Cannot move, act, change character, but the GUI is still reactive, somehow. I cannot open menu, have to alt+F4.

5/ video of me being stuck (when nothing happens, it’s me clicking everywhere and hitting all keyboard keys to try stuff) :

When do you think we will have a demo with sounds ?

Quick note : the demo runs via WINE on my Linux Manjaro PC. Also, it’s Unity, so maybe later we can have a native version ? Anyway, i’m happy enough, the previous game USC didn’t run at all for me.