Find some food and escape the islands · By

Hey there. Great looking game nice simple game-play but I first encountered a bug at the very start when I picked up the first piece of fruit and then tried to put it in the pit. The dialog got stuck in a loop where it would say press k ( with no dialog bubble) , I would, then the dialog bubble would flash for a split second and after it disappeared the controls were still locked. I could hit K again and the bug loop would start again with the controls never being unlocked. I had to restart the game. I enjoyed the game collecting all the pickups I could and when I was back at the starting Island I talked to the woman making the raft and after her dialog was done I was stuck in the same bug loop I described with the pit where the controls locked up except for the k button that just restarted the buggy dialog loop.

Just thought I'd let you know, so you could fix this.
Really great art in your game! 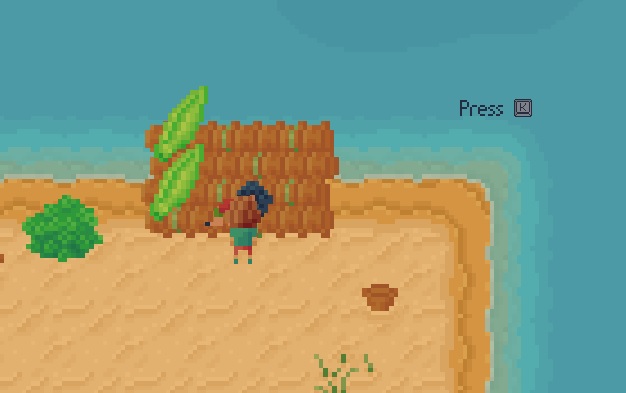 Hi RikOculon, thanks for reporting! I'd had that too earlier in development, but I thought I'd fixed it... I'll give it another look. It's good to know it's happening with the pit as well, I'd never seen that before. And thanks, I'm glad you like the art!

Hi RikOclon, it should be fixed now. Thanks again for letting me know!