Today I'm covering a tutorial on how to draw one of these fireball creatures from the Final Fantasy series, they're called bombs (can I say that on here?). They are recurring enemies throughout the franchise. They attack the heroes and will eventually self-destruct. They change in appearance from game to game but they will have the same general features. You can read more about them on the Final Fantasy Wiki but here's 2 sprites I created. The left version is the new one I created for the tutorial and the right is the older one I did but both look good to me so I thought I'd share them both. 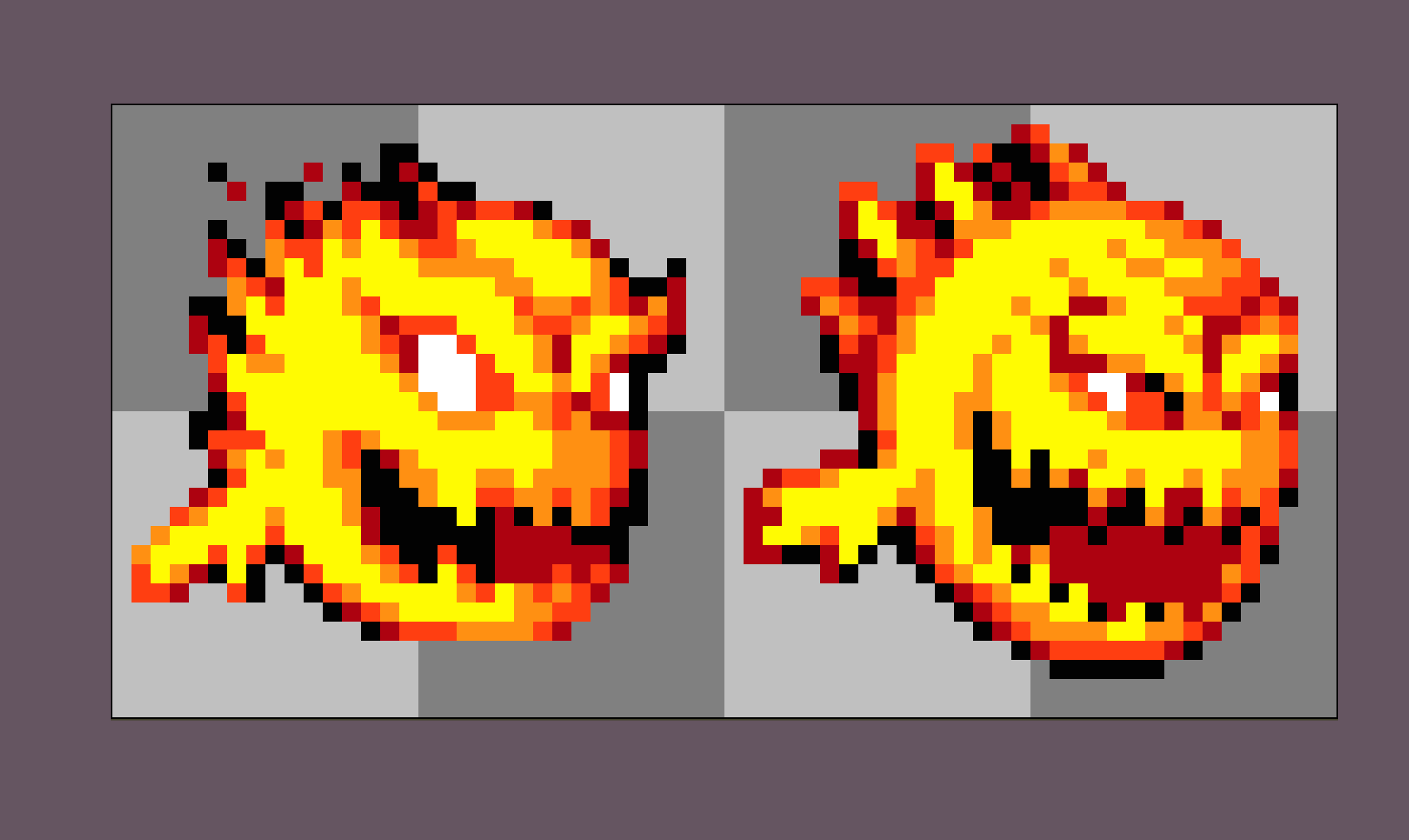 Pretty awesome right?  Well if you want to learn how to draw one yourself, I'll try to recreate it from scratch now that I have an general understanding of how to draw one.

I used 32px. When I pick creature canvas sizes, I like to keep them in multiples of 16px. Sometimes I'll try sketching them in 16px first just to see if they'll look good, but for this sprite I needed more room to work in the smaller details as you can see here. On the left is 16px, a bit too difficult to pull off, so it's probably better to go for 32px. 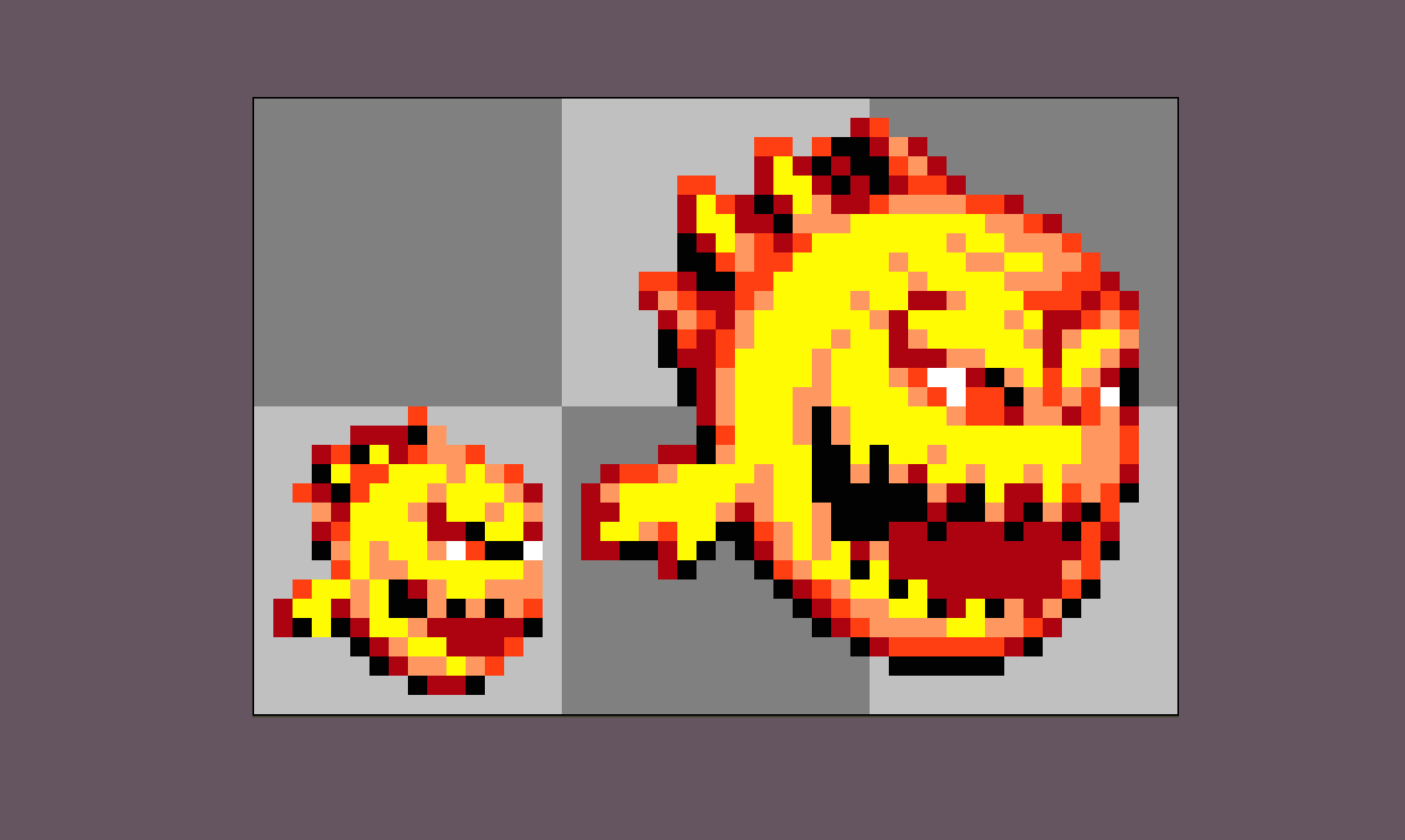 So if you look at reference. You'll see a bunch of fireball creatures with faces, and tiny arms. That's pretty much all they are. You can start by sketching in a circle shape with spikey flames behind it, then sketching the mouth and eyes. Arms will be added later. If you're using Aseprite, it really helps to the preview window open while drawing so you can always easily see how your sprite looks. 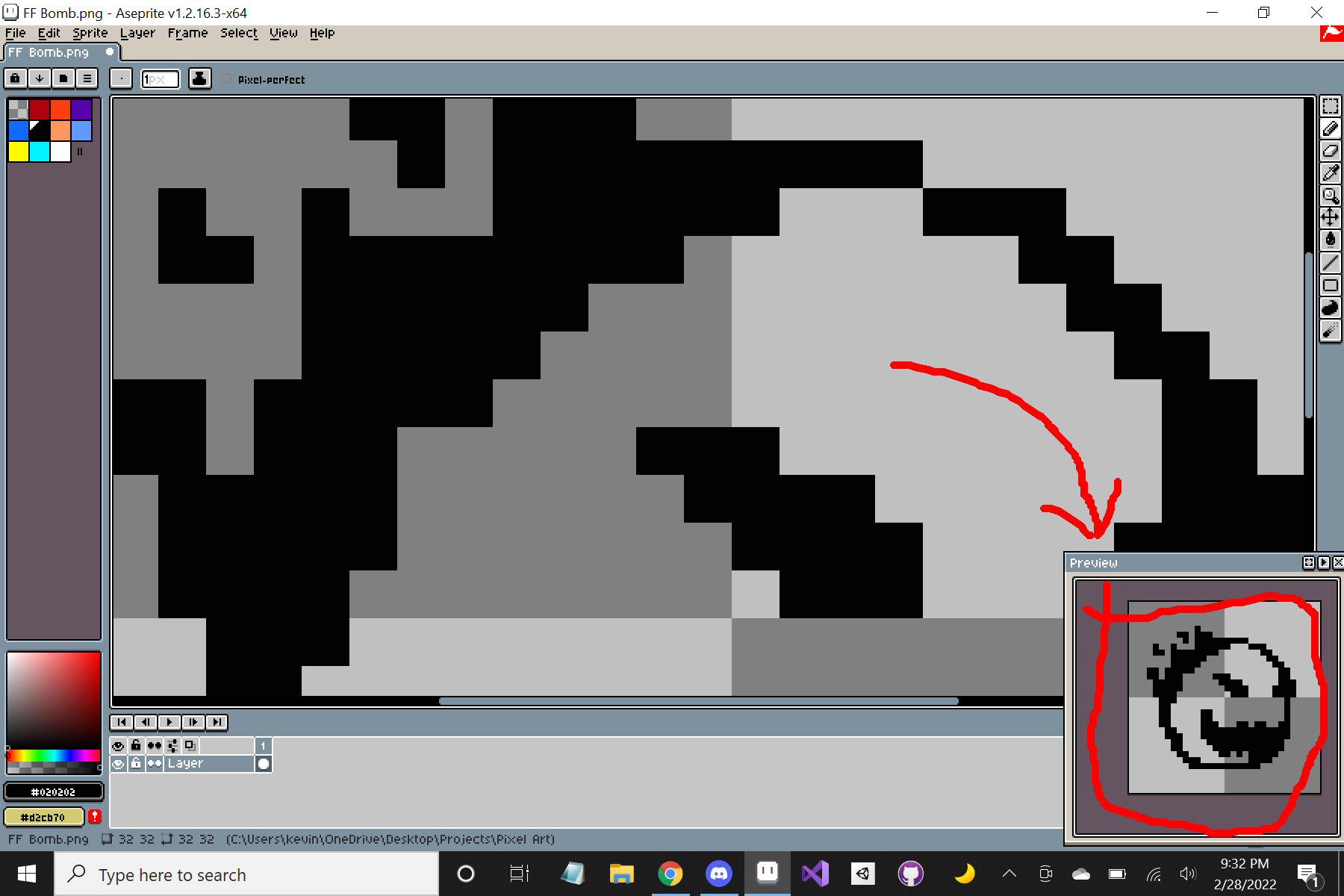 Fire colors usually range from red to yellow. The way I drew it is so the darker areas of the creature appear redder, and the brighter areas lean towards yellow. I know I sketched the sprite in black but generally speaking since fire glows we won't be using too much black. Too much of it makes the sprite look too dim, however black does give nice contrast and helps the readability so don't completely avoid using it! You might end up having something like this. 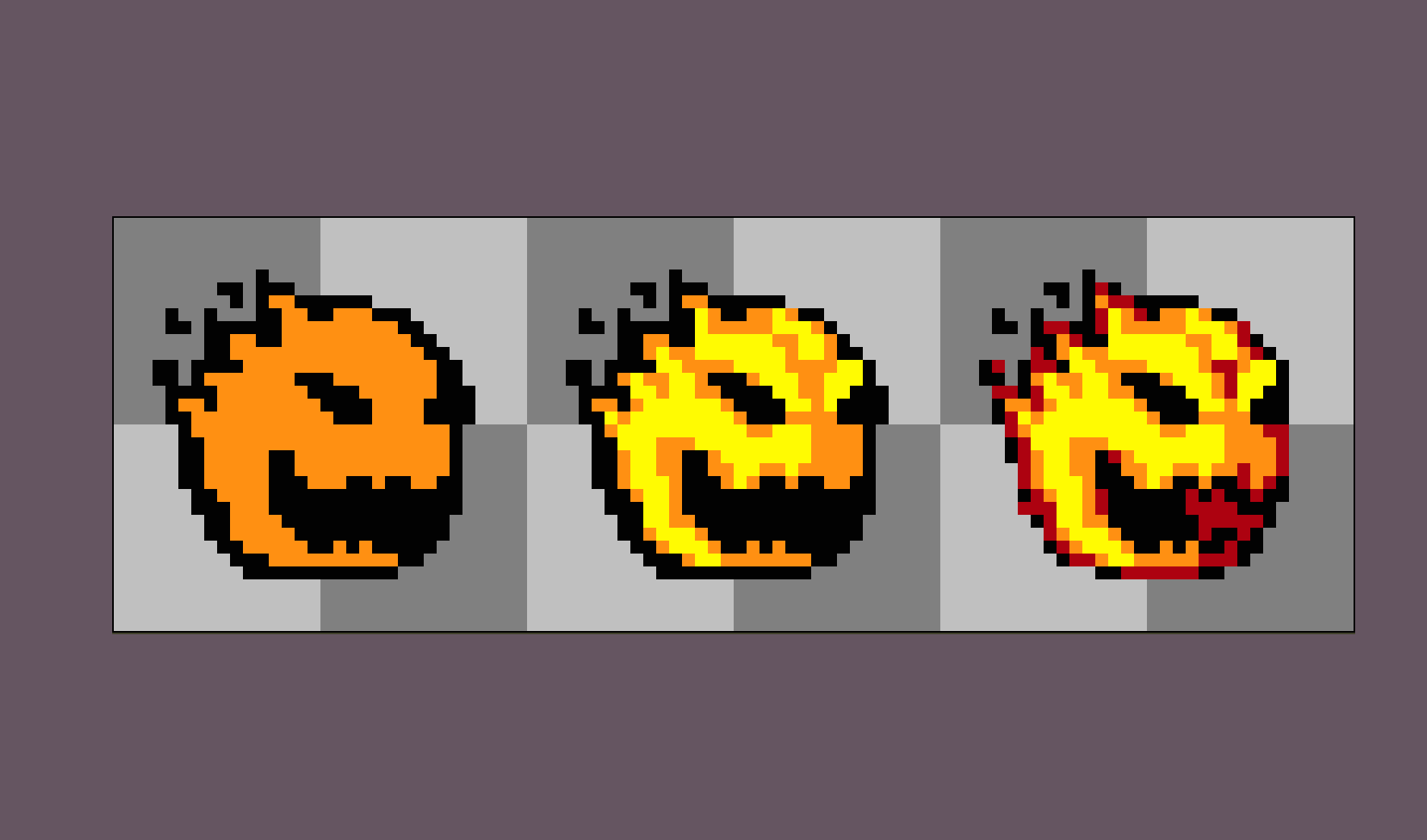 So this is good but the sprite is lacking character. The eyes shouldn't be void of color and the tiny arms add a lot of character so we need to add those in. The eyebrows are pretty big and pointy too, don't forget. Make sure the teeth sharp and noticeable.  These are the final touches I added to the sprites. 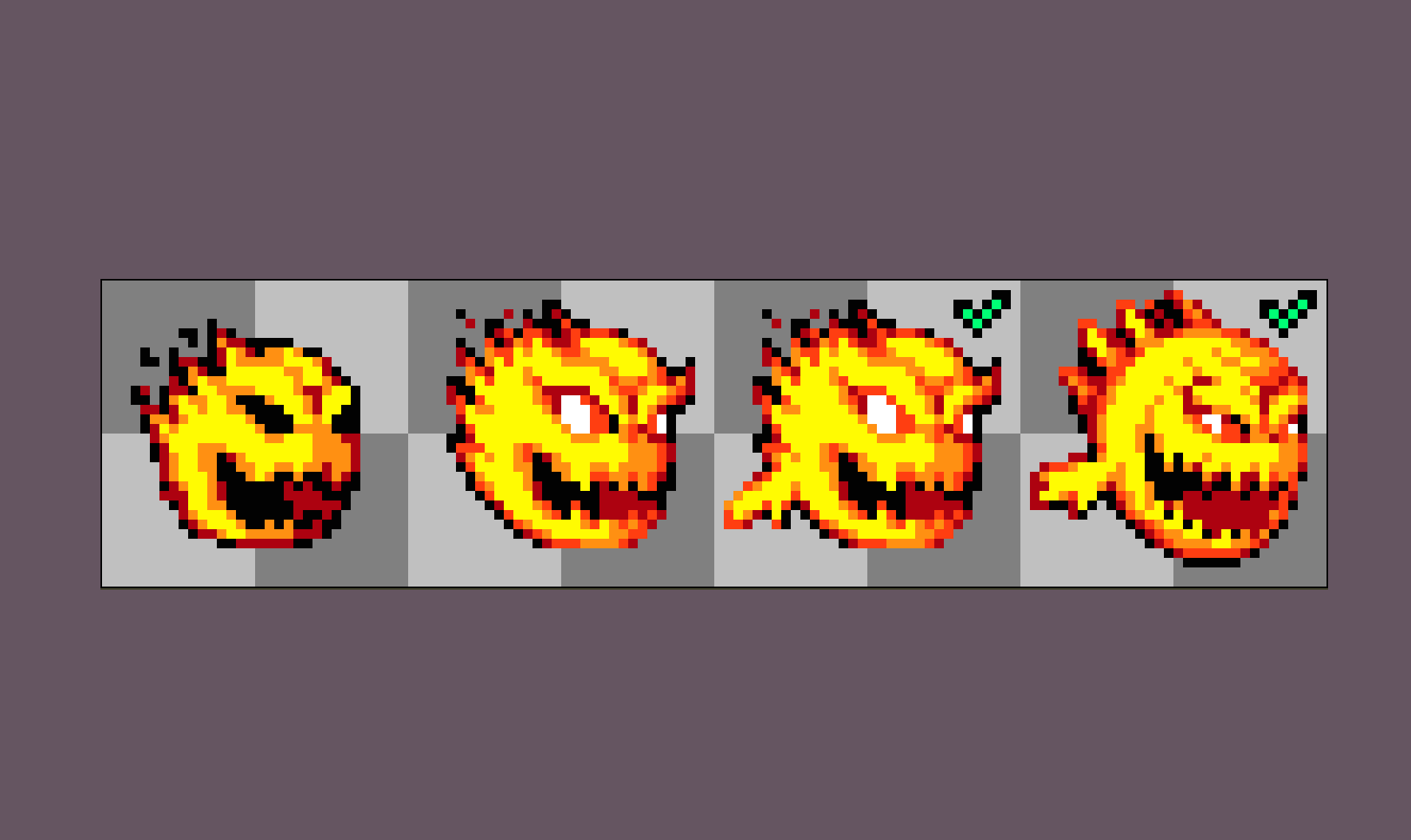 So there you have it! Another tutorial crossed off my list. I hope you learn a lot from them and I'm always glad to see your progress as well so feel free to share yours if you want. I'll see you in the next tutorial.