Reply with any thoughts or ideas you have on how to make the game more enjoyable and I'll look them over.

I found your itch.io via the r/SoloDevelopment. I actually had a similar idea for a game that am prototyping. ;)

First, good idea on having this feedback and bug posts.

Second, one bit of feedback about the game is the cursor doesn't always remained locked to main screen. For instance, I use ALT+TAB a lot to switch windows. Once I do this, the cursor is visible in game and goes onto other screens. Then, I can't interact with anything because the OS thinks the cursor is outside the game and I am trying to click something on another screen/monitor when in reality I am trying to use the in-game crosshair to select the cell phone or people's papers. Solution: I see that you are using Unity, so try implementing Cursor.lockState's here. Hope this helps!

Ah interesting, I wasn't aware there was an issue with that but in the Unity editor the cursor lockstate almost never reflects how it actually works lol. I also recently added the developer console which entirely messes with the cursor lockstate so I bet that could be the culprit.

Anyways, thanks for the feedback!

It's a very good idea, but very janky currently. As far as I see, there aren't any penalties for crashing, which is a bummer, the document checking doesn't always work, a map with the route (but definitely not a minimap! maybe something accessible like the phone?) is desperately needed, too.

Love the crazy traffic and how it drives. The artstyle of the cars is great. Would like the marshrutka to also behave more erratically, maybe a jumpier suspension? Currently it's too easy to drive max speed and avoid traffic imo.

I really like the setting, the semi-surrealness gives genuine vibes, if perfected, I think this could be one of the better implemented post-ussr driving oriented maps, as it doesn't feel empty like many other post-soviet driving games. (City car driving comes to mind, it's really hard to design a lively post soviet city for driving) You could achieve similar day effects with heavy rain or snow and a lot of greyness.

Some thoughts about a period-correct Russian irl experience: The multitasking while driving thing with a phone is a necessity for any real marshrutka driver,  but checking documents stationary while people enter? No way, that has to be done while driving, in addition to collecting payment and giving out change to the correct passenger, just like in a real marshrutka. You have to be fast enough to outcompete the other drivers on the same line, so they won't nag the passengers before you, you can't be wasting time like that. Speaking of passengers, they can demand a stop pretty much anywhere and, usually, too late to stop safely. Also, depending on the marshrutka model, the passenger door (operated by passengers on a classic Gazelle Marshrutka) can jam or break, so the driver either has to scream so the passengers will close it carefully, or, forgetting to do so, get out and fix it. The shouted phrase "don't slam the door" was an integral part of the marshrutka experience and became a big meme, given the absurdity. There was also a meme about payments, as there were often passengers refusing to pay, leading to confrontations with the driver. Most marshrutkas had "funny" non-payment caution, or even threat, signs. Also there has to be a "boss" on the end of the line that collects payment and fines you if you are too slow or something (but that's more of a game economy question) and other marshrutkas with drivers you have beef with. 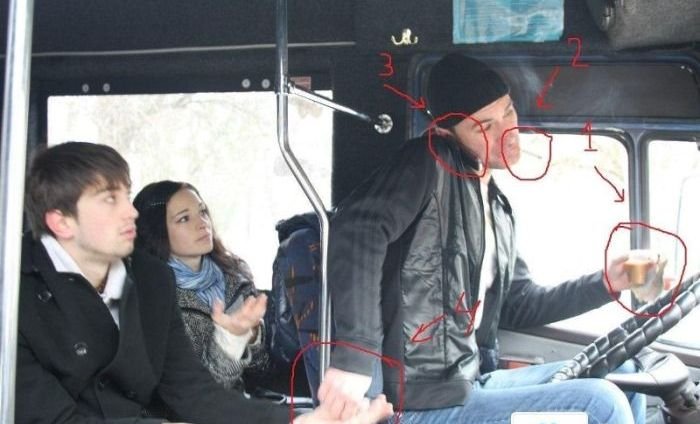 About the door closing: (the text reads: don't slam the door; someone, likely the driver, seems to be fixing it) 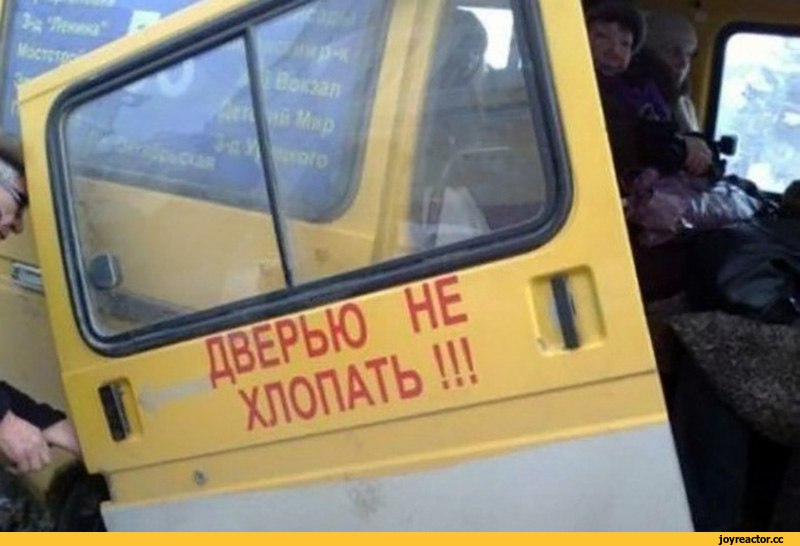 A couple of typical warning signs in a marshrutka: (Translated from left to right:

A stop somewhere here will be somewhere there; Please ask the driver to stop, not your neighboring passenger; The driver isn't an octopus, he won't give change to everyone; Scream loader, there's a chance we'll stop; Lost my temper, will be back in 5 minutes; amusement ride: 20 minutes of fear and you're home; The more people, the softer the ride (Marshrutkas had leaf spring suspensions, and were often overcrowded); Complaints can be filed in the next car; Please ask for stops early and loudly There also often were extended joke pricelists posted, would be interesting to see some of the more common features gamified: 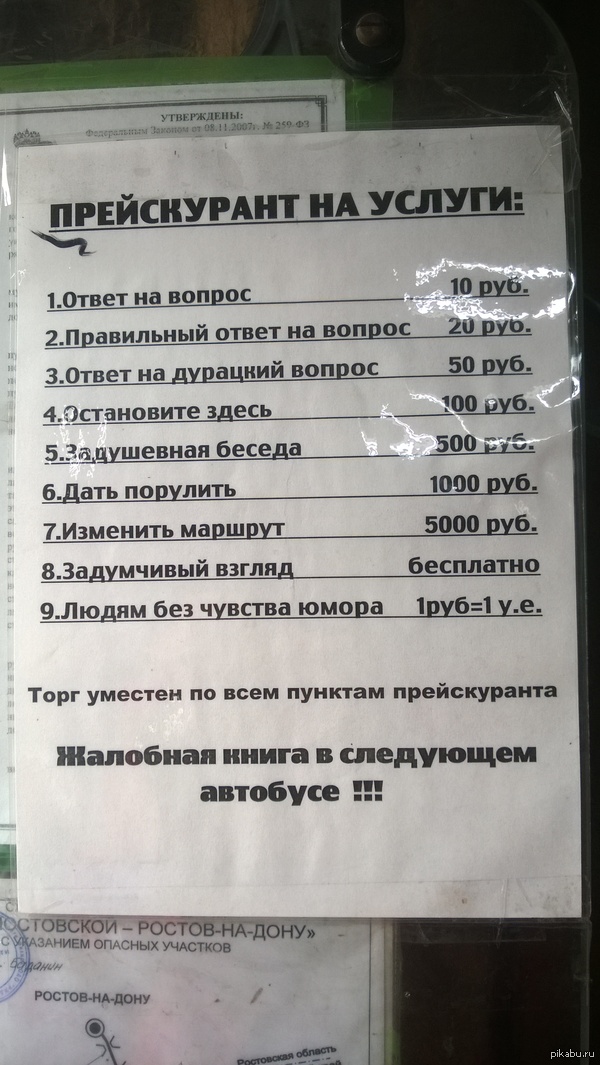 Listed is who has the right for a free fare, squared red is Tom Cruise, after that there's a joke pricelist

Anyway, there are a lot of quirks and details that could make a marshrutka game experience genuine, and if you need any more input of how they worked irl I'd be happy to share more.

I think you're going for an "experience" simulator and not for just another bus simulator, which I think could turn out very interesting.

Wow this is some incredible feedback, I was actually just on a shortish Unity hiatus because I had lost direction with this project but I think that's over now. So after what you said I'm thinking :

- Remove bus stops and add regions/areas/landmarks that people request to be dropped off at instead, and make the NPCs hail you from the side of the road

- Add a highlighted route on the map which you will be following for that day, and make NPC's only spawn on that route. (You'll have an amount of time to get to the start of the route and then you'll be expected by the boss at the end of the route at a certain time)

- Simplify document checking and add change counting while on the go

- Add day mode w/ bad weather, have it transition from day to night through your shift

- Add other marshrutka drivers on the road that behave especially erratically.

- Redesign marshrutka to have sliding door that can jam, (make it so you can disembark the bus and walk around slowly, also start the day on foot and make you enter your vehicle in the morning)

- Have the people in the back frequently talk to you and ask questions that you have to answer with multiple choice while driving. Also make them ask to be dropped off and if you're too far away they won't get out.

- Increase difficulty of steering/braking as your vehicles sustains more damage, this will replace the system where you instantly die. At the end of each day you can choose if you want to pay money to repair your vehicle as well as other options you must weigh.

Those are just some of the notes I made so that I don't forget everything you said. Honestly these changes wouldn't be too hard to implement and I'm glad to have some direction again. Much appreciated!

And expect me to reply to you in the future some time as I will likely have questions about specific things.

No problem! I was glad to be helpful! I think you got an awesome roadmap for further development. I'll mention a couple things that aren't quite "lore friendly", but I've got very minor gamedev experience, and I think those things should be up to you to make for better gameplay:

I think you could easily get lost in the city designing though, as I mentioned, it's hard to design a proper soviet city for driving. I wouldn't go the traditional route on that, maybe longer stretches of road connected by intersections or something (my summer car-like Rural to city marshrutka?). I think as soon as you can overview a part of the city from one location the illusion starts falling apart, given the repetitive design of their irl counterparts and the impossibility of implementing subtle differences of various landmarks like buildings in a game. Putting down landmarks just for the sake of the player finding his way around isn't the best solution either, imo, they should be pretty humble, convenience stores, schools, hostitals, factories etc. I can't think of any well implemented soviet city for driving, but you could look into "Bright Lights of Svetlov" for design references, but it's interior focused. Another one that comes to mind is the GTA Criminal Russia mod for san andreas, while the mod itself is considered bottom of the barrel by many, I think it got a couple city design elements right, given it's major limitations.

Real Marshrutkas still, mostly, followed bus routes, which did have bus stops. It's tough to say exactly, but I think bus stops were still the major hubs for boarding passengers. More people got in on bus stops than left, But you'll have to see what works gameplay wise, I'd still leave the occasional bus stop in. The first and last stop of the route usually were bus stops and had a couple marshrutkas of the same number lined up waiting to go.

The multiple choice questions from passengers is actually a great idea, as irl passengers did often ask were an address is or where to get off. Especially hilarious situations ensued when passengers asked the driver to tell them when they had to get off for a certain place and the driver completely forgot, but idk if that's a think worth implementing early on. Another question the driver got asked by boarding passengers is if there are any sitting spots left, the answer was always yes no matter what lol.

Russian marshrutkas of that era had no documents to check, as every fare was strictly cash only, but maybe there were in other countries. Some post 200(?) marshrutkas had the ability for an electronic fare card, but that's beside the point. I think a multitasking cash taking and change giving mechanic while driving would be better suited, if you want to leave some document checking mechanism in, I think checking if a passenger is too intoxicated and refusing them the ride would be more realistic (it was a common occurence irl, but ruckus ensured either way lol). There were some rules for who had a right for a free fare (I think disabled, elderly and kids), given they show the appropriate documents, but that was never honored. The sign it the last picture I posted even mocks that fact, listing some absurdities like Tom Cruise, Nobel Prize winners and Matrix agents as having the right for a free fare. Only free fares for kids that were obviously pre-school were honored, and even that was inconsistent in the early 90s.

Anyway, I guess you can say I'm a 90s marshrutka connoisseur😂, but the 90s marshrutka experience was truly something you wouldn't be able to see anywhere nowadays given the absurdities and surrealness of it.

There aren't really many English resources (and even Russian or other eastern language ones are rare) documenting the marshurka phenomenon. But here are some I found on google that might be helpful: