Thanks vampirshi gaming! Imagine with a whole development timing. Regards!

Thanks Cryptic Hybrid! Help us share the project! Regards!

We think the same way. We just need support. Regards!

We hope you enjoyed the game.

"HOLMGANG: Memories of the Forgotten" is a 3D hack n’ slash game with some RPG elements and a deep narrative based on an epic fantasy book saga, where three antiheroes change the history of their world forever.

The game is being created by an experienced team of developers, who previously worked at well-known companies such as Rockstar, Electronic Arts, 343 Industries, Mercury Steam or Ankama, among others.

Every legend has a dark side. Twenty-two years before Dragon King’s reign, an empire emerged. An empire whose single aim was the annihilation of life. Relive the tragic days of the Shadow War.

After the death of king Haziel of Draken, his son, Hazulem, proclaimed himself emperor of Dracorum. Through the invocation of the First Hierarchy demons, he imposed its reign of terror all over the planet. Experience the story of a group of ill-starred heroes that decided to make a stand and change the course of history forever. 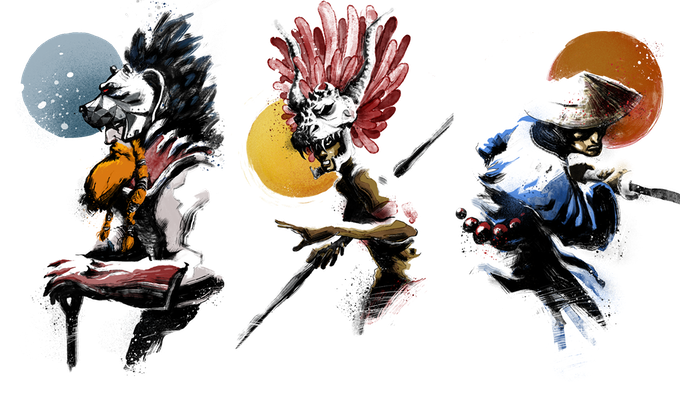 Fight like Kandar, the barbarian, Tatsu, the ronin, and Valentia, the Amazon woman, and defeat the dark secrets of Emperor Hazulem. Reclaim your honor and take your place within the legends.

Holmgang is a hack n’ slash at its core, and each character will have their unique combat style and executions. Besides, you’ll be able to craft your own combos in the combo editor and evolve each character’s skill tree, to make the experience truly unique and personal. During the game, you’ll face different enemies with different behaviors, weapons and weaknesses, so your gear and combo configuration will decide if you’re victorious!

In Holmgang, you’ll explore the world of Dracorum by land and sea, finding friends and foes along the way. Some of them will give you quests or sell you unique items, but others will try to deceive you. Choose your path wisely, because there’s not only one, and some of them have intricate environmental puzzles that could lead you to a certain death. Besides, each main character will be able to access secret areas, with rare loot. This adds a high replayability factor, like any good old “metroidvania”.

Remember, there's no one right way to play the game… so experience them all!

The visual art style of Holmgang is defined by a balance between soft watercolor surfaces with stylish ink touches on borders and details. An artistic mix that tries to reproduce hand-made paintings. While created in 3D, Holmgang uses several techniques that sets it apart from other games.

The music is another strong pillar, and has an orchestral epic style. There’s a theme for each character, defining the emotions of the heroes and changing with the action of the game. Beautiful melodies with great orchestrations, epic drums and multiple emotions is what you will hear in Holmgang’s soundtrack.

Here we leave you the pre-alpha demo, of which we hope you can give us feedback.

And, if you consider it appropriate, you can help us on the KickStarter.

Hey, do you like coffee? its yours lucky day. This is Coffee Crisis where you must fight versus aliens for the coffee.

Coffee Crisis is a neo-rogue brawler that puts you in the shoes of the only baristas on Earth with enough heavy metal in their veins to fend off an alien assault. Play solo or join up with a friend to fight across eight unique locationsranging from your Coffee House HQ to the far reaches of outer space. Go up against an army of wild alien enemies, and the humans they have brainwashed with a variety of weapons, special moves, suplexes, and coffee! The Smurglian race has come to Earth and they're not leaving until they steal our three most prized commodities: heavy metal, free Wifi, and coffee. Crunch through fistfuls of alien meat as you stop their invasion, and enjoy random modifiers to the enemies and action on each playthrough. It's a totally unique cup of beat 'em up action every time you play!

So grab a hot mug and save the world!

Hey it is Eternum Ex an adventure game, where you must flee to enemies.

Eternum Ex is a retro platform video game with the look and feel of the ´80s arcade cabinet games. Titles that have inspired and most influenced its creation are: Bomb Jack (Tehkan, 1984), Ghosts´n Goblins (Capcom, 1985), Baluba-louk no Densetsu (Able, 1986) and Psychic 5 (Jaleco, 1987).

Sir Arthur has gotten old... too old. He has lost everything he had and loved, and with nothing more to lose he leaves for Samarnath, an evil subterranean and the most important: five magical orbs that together provide: The Eternal youth.

Thanks to its progressive difficulty curve, and with a path divided into "worlds" of 5 levels each one, Eternum Ex is challenging and an ode the nostalgia of the golden age of arcade games.

Easy to play, hard to master

With a very simple core gameplay mechanics, an increasing difficulty, an exciting and addictive gameplay, and with a very precise control, Eternum Ex is perfect for retro hardcore gamers but also for those who want to start in retro games, and even for those who want to show children how games were when game industry was taking its first steps and gameplay was the most important factor in a video game.

- Awesome gameplay (may cause addiction).

- Secrets bonus on each level.

A Game Developed by Flynn´s Arcade

Hey guys, these is Bleep Bloop  a puzzle game for one or two players, where our protagonists Bleep and Bloop must cooperate to complete the levels.

Meet Bleep and Bloop as they help each other overcome all the challenges that stand in their way. A light-hearted and playful puzzle game about working together.

Play alone controlling both characters or share the experience with a friend. "Bleep Bloop" is extremely easy to learn, but that doesn’t mean the puzzles will be a piece of cake.

– Enough levels to keep you entertained during a lazy Sunday, but not enough to make you wish the game had ended already.

– Fun and intelligent mechanics that will make you feel really satisfied as you complete the different levels, do not give up! You just need a little practice.

– A captivating art that delights the most demanding players, bringing a minimalist proposal, but very striking.

– Beautiful soundtrack that makes getting stuck on a level a bit less painful. – Perfect for single-player or two-player coop. Yelling at each other doesn’t improve your puzzle-solving skills, but it’s always fun. – Features a small secret hidden somewhere. Go look for it.

A real challenge of puzzles which we are sure you will enjoy and play again and again, but, at the cost of an occasional anger, and if you play in two players mode, maybe at the expense of a friend too.

A Game Developed by Ludipe and Friends

Hi itch.io Community! How is it going?

Well, it is finally here. Watracio has woken up the next morning and has been accused of the disappearance of Daphne, the "friendly" waitress of Flamingo's Creek that he met in the first chapter "Ovnifagos Don't Eat Flamingos". And he, as he has been the last one with whom he has been seen…then you will have to withstand the blow in "1313 Barnabas Dead End Drive".

Live Flamingo's Creek in all its extension. Travel its streets and know its characters the madness of the most hated town for our protagonist, Watracio Walpurgis, our FBI eggplant agent…also a vampire.

Continuing with the clear inspiration between David Lynch, Twin Peaks, the Zelda saga, Pixel Art and top-down 2D vision, we will find the evolution of a second episode: open town. Now you have a much deeper experience of Flamingo's Creekand its inhabitants with the main story and the side missions. Enjoy this second and totally immersive adventure in which you will have to follow the track of Daphne Trujillo, find her before it is too late and discover who the hell is the "inhabitant number 64".

Hahaha, very nice gameplay. Nice you enjoy the game! Thanks!!