you can shoryuken into rider kick
a good videogame

Very fun game. The final stage felt surprisingly short but I guess it also being the bonus endless level evens it out. Good job.

Thank you. I had good fun playing the browser version to the end back when it released.

The game doesn't save progress after clearing the first level, so if there's supposed to be another one after the gap with the doors it itsn't appearing. It did record the coins for purchasing palettes though.

Found the gear in the sewer area but it wasn't added to my inventory, leaving me stuck at the gate later.

I hope you'll be able to complete the game someday.

Gameplay feels nice but keyboard controls for Player 1 aren't working. It defaults to touch controls even on desktop browser, so I tested it out as Player 2.

That's the source code that runs on Multimedia Fusion. Sorry for the confusing filename. 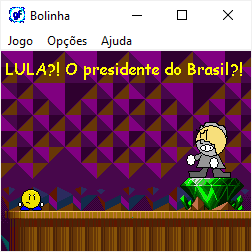 The game is very fun! 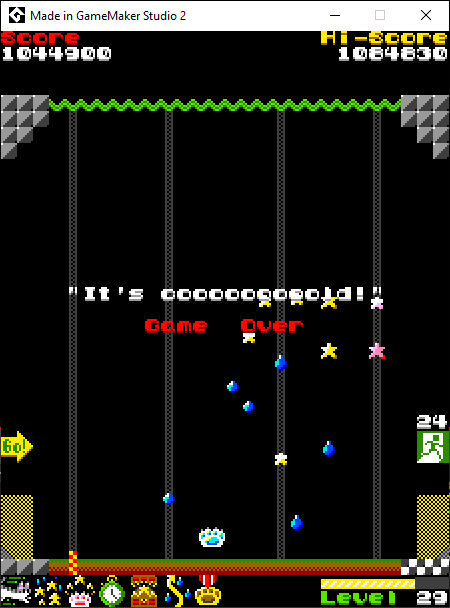 Pretty good remake. Loved how bosses have intros and that Battle Chip Challenge music played for GutsMan. Random encounters were broken when I played, though. Not a single one would appear in any area.

The download keeps getting eaten by Windows Defender out of virus claims. Been having trouble with that as well from using good old Clickteam Fusion...

Had good fun playing to the end twice, on a 100% and 0% collection goals. Seems collecting the yellow dudes has no effect on the weird ending...

Should work now. Thanks for the warning.

Got a game over on the Panic Puppet Act 1 boss right now and took a break. The level design often has those awkward space-filling zig zags that can make it confusing to navigate but I love the effort you put in recreating mechanics and setpieces from 3D Blast into them. The boss fights are the game's strongest point; I had a ton of fun fighting the Gene Gadget 1 boss and was sad when the "other two" didn't come out to play right then.

Only thing I didn't like so far was the Special Stages. You've recreated the Sonic 2 half-pipe here but the controls just feel wrong.

Really, great work getting this finished!

Thanks for playing the game! All the music are placeholders but yes, that's something to keep in mind.

The game isn't really a metroidvania but sure feels like a more crazy and chaotic Cameltry. I liked it. Like Sambi said, some guidance towards the end of each level would nice, but I understand the game's annoyances with getting lost and bouncing around uncontrollably were likely deliberate, something you wanted us to wrestle with.

I just think the game doesn't have enough variety in hazard types and mechanics to stay fresh for 20 levels, especially since they become longer and longer. After level 15, I got weary enough to pause it and took a break for a while.

Pretty good minimalist platformer. That final factory level where the player has to time jumps to hop on top of cars and ride them was the most clever and fun.

The final level was considerably long and harsh, so although I soldiered through it after like ten minutes you can expect most people to reaaally whine about it. :P

It says here this page was last updated 99 days ago. Is this game still in the works?  And if so, how much longer the full game is planned to be? 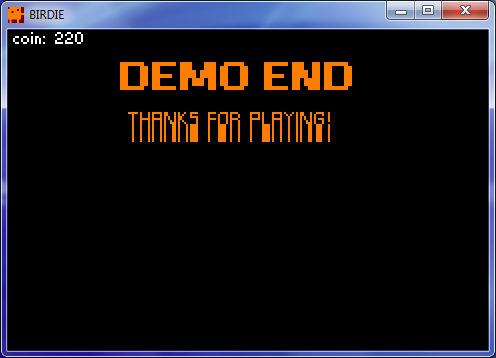 Delete the file "last" from the Data\Profiles folder. This will force the game to start from the control settings screen.

Well shit, implemented the drat move anyway. It deals half damage but hits around 20 times.  It also pierces enemy invincibility.

"i don't get how one is supposed to approach knife goons, their attacks are rapid and not telegraphed"

They very clearly whip out the knife, show it and pull it over their heads for several frames before swinging it.

"They can do their thing right out of stun and chef through your hp like knife through butter. "

That's the point. I want the flamethrower robot to be the one enemy that presents a real threat.

"I tried to juggle them but character's reach is just silly."

The standard air combo is Dive Kick > Air Punch > Spin Kick > Air Punch over and over infinitely or until you finish it with a heavy attack. The character's air attacks have large hitboxes and drag enemies to his position to prevent players from missing hits.

Rolling deals 1 hp of damage... every two frames, so it hits 3 to 5 times whenever you roll into someone. When any attack bonuses are on, what do you think happens? That aside rolling is meant to let you keep a combo going between enemy ambushes without stopping and increases the special gauge faster than it does while blocking. I have now changed it so pressing down while rolling under a certain speed makes Bolinha block, though.

I also considered making it so rolling into an enemy and jumping drags it with you, but while it is a fun concept, it does a ridiculous amount of damage (enough to kill every enemy in a single jump without stat buffs) and overshadows the entire moveset. I've cut it out for now.

Yeah, I know. I still haven't changed the default sfx from Sonic Worlds.

Yeah, I really should make a proper tutorial level.

I didn't add any super moves in yet. Currently it acts as a stamina meter and gives an attack bonus from 5 to 30 when it is nearly filled up.