Thanks for you kind comments!

Limiting the movements was out of necessity. Allowing the player to turn without moving makes most puzzles trivial to solve.

Thanks! Glad you found it useful!

Thank you very much for playing :)

If you don't want to download the binary builds you can play online in the PICO8 BBS: https://www.lexaloffle.com/bbs/?tid=36432

As you can see, I kind of followed the optional theme flow.

Sorry I wasn't able to play. The web version didn't work for me. In the windows one only the S key would let me move the menu cursor but the other keys wouldn't work :(

I liked the graphics. Great RPG!

I managed to buy the ship and win the game. When I got to level 5 all the battles were just pressing the button so it started to get boring.

Short and nice. I liked it.

The only issue I found is that pressing the jump button quickly can make the chicken to fly up. Pressing it a lot I was able to climb up the hole from the start and just go the end of the game from there :P

Good game. I finished all 13 levels and I enjoyed it very much!

I found that changing the character right after moving it would move both at the same time. Pressing rhythmically  the button I could make both move but I don't think this breaks any level of the game.

While playing I discovered that my Xbox controller drifts so I died a lot of times :(

Congrats on your release! Looking forward to the The Waking Cloak.

I haven't read the other comments. Maybe I'm repeating something.

I liked the game overall but I have a comment about puzzle progression:

After getting the swap scroll it would be nice to have a very simple test of the mechanic to let the players get used to it. For example: In order to exit the room, there is a pot that blocks the door and you need to swap with (a single shot). Afterwards a room that requires two shots and then introduce mirrors, etc. It was not the case back in the 90s but nowadays I guess is the expected way to introduce new mechanics.

I think the item in level 2 pretty much destroys the dungeon. The puzzles have a great design for level 1 but are trivial for level 2. Maybe all these puzzles should be mandatory in level 1 in order to get to level 2. Or you could consider nerfing the weapon for example by only allowing the ball to turn at certain tiles (maybe only can change direction when touching a wall instead of mid-air).

I played for an hour in total but I had to restart the game twice. The first time I had to stop after 30 minutes because of an appointment and later I there is no save feature. After work played again but after some time I got stuck. I think I fell through a hole while moving in diagonal and I got stuck in a candle :( I believe that games that lean on the puzzle side should have a button to restart the current room. It would also fix my stuckness. The third time I was much faster and finished the dungeon in ~10 minutes. I found a hidden lake with a weirdo in there.

I can't talk much about the difficulty because I published a puzzle game with a similar mechanic in a gamejam couple years ago so the solutions looked quite obvious to me.

I played with an USB Xbox controller. Evertyhing was smooth  besides when I got stuck in a candle.

Bug? It looks like you can move a bit the character while the screen in black in the intro so you can make it fall in a different place. That was my impression, I may be wrong.

After playing more... when you get used to it, is easier to follow what the AI is doing so you can disregard my last comment.

Also, I found a bug and I was able to lock the game playing with the Xbox 360 USB controller: When you select an action and the random numbers are being shown, you can quickly press LT or RT to change the action. If you then select a different action nothing happens. But, if you are doing a pass and you quickly press RT (switches to shoot), LT (returns back to pass) and then move the cursor to your position while the number is being computed, it will try to do a pass to same exact tile you are in and the game will lock. You can't pass to yourself during the game but it is possible by doing RT, LT while executing an action.

I tried to record it but the animation ended up glitched. The graphics in the game  were fine, is just an issue with the recorder.

I haven't played much yet but here it is some early feedback.

I encountered some situations when I couldn't find easily the ball. In the situation below I was not sure who had the ball. Maybe marking in a different color the tile with the ball will do. 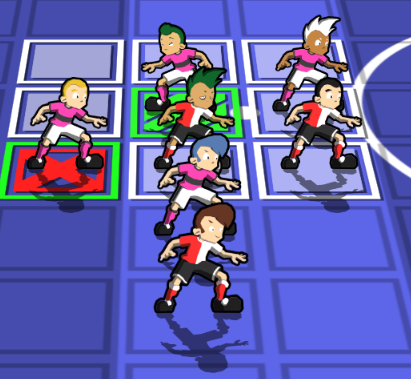 Also, the IA performs actions too fast and it was hard for me to follow. I would add some messages on screen for each event: Tackle! Shoot! It failed! etc. Games like Pokemon have text windows during combat explaining what's going on.

Thanks for your continuous interest on the game!

In the latest version I increased the number of levels to 42. I will add more levels and a couple more puzzle elements in the near future.

The level editor is useful to me because I can design levels while I'm on the go but in this version I've removed the option to share the levels. Allowing user-generated content may increase the minimum age in ESRB/PEGI/etc ratings.

I liked your game. Hope you can add some more levels and mechanics soon!

PS. In case anybody has issues with the Linux version: In Ubuntu I had to do:

Thanks for you comment! I'm glad you enjoyed it. I plan to add more levels soon and probably release it on Android too.

I liked the game! The game is some sort of inverse Arkanoid. Very interesting concept. Congrats!

The graphics are good and the concept looks promising but I wasn't able to understand how to play :(

By the way, the windows version is not correctly marked so your game doesn't show up in the entries list if I filter by "Windows"

Very cool game! I played until level 3. I tried like a hundred time and finally I had gave up :(

According to the files in the  zip there are 6 levels, right? I only could see like 50% of the game.

The only problem I saw is that the camera seems to have a lot of momentum when following the player. The rest was very cool!

I liked the game! Similar to Contra/Probotector but in the Far West.

I played first on Android and was a bit complicated to control (at least on my phone). Then I played again on PC and it was fine.

Interesting game with a good variety of enemies in just a few levels. I liked it!

I think the problems in the movement you mention are intended. In order to chance the direction the character is facing you have to move in that direction. If I let the character to face other directions without moving all the puzzles become straightforward to solve. It is part of the difficulty of the game.

I liked the game a lot. Congrats! I hope you'll finish it soon.

It would be cool if the grenades were re-stocked when you die and continue. I used them all in the first level and didn't have any for the rest of the game.

Great graphics and effects! The control is very responsive.

The only problem is that it's too short :(

I'm very bad playing the game :( It's too fast for me and player 2 always wins...

Why is that players 1 and 2 have a much bigger racket than players 3 and 4? Also, it was not clear to me when I score points and when I lose points.

Good game! Very fun. The first time I played I was killed with only 1 second left.

After playing a couple times I started to follow a strategy to almost-always win. Consider adding more times of rays and tweak item spawns.

Great idea! It took some time to understand the mechanics and the controls when I finally did, it was the last level :(

Do you plan to continue working on the game? I'd play more levels.

I liked the game! The boss was very cool but a bit too easy.

The blue-orange colors were too much for me. The green palette was more pleasant to play.

Also I found hard at the beginning to understand what was part of the background.  It was common in Gameboy to only use the darker green for stuff that you can interact with (platforms, walls, items, etc) and use only the three other colors in the background.

Thanks! It only has 16 levels so you were close to the end.

I'll be adding the sound effects before the end of the gbjam.