Hi guys! I have read all of the comments below and I have some thoughts about dates:

Unfortunately there are no any visible sequences or coincidences in this numbers so I can't argue that these numbers make sense.

2) The one "modern" date: 11/15/19. The simplest assumption: something will happen on 15th of November. Update of the game? New hint from developers?

Man, I am sorry. I have tried to reobtain the log file and it really didn't appear. I think that I accidentally type something else then just a Konami code which allow file to appear. I will try to figure it out today. Sorry for some misinformation!

I see two main versions: 1) This is a real hint, but kind of strange - the only moments where we are technically "run out of bullets" are the moments where the ghost attacks us. I have tried to type some combinations at these moments but nothing happened. 2) This is a type of expression - "friends" mean the gamers, "bullets" mean our attempts in clue finding, so this all mean that "the gamers stuck and here is the hint for them".

You should to capture two flags, listen to the developer and then leave to the main servers list. After that, you should return and repeat the capture of two flags. The developer will ask you something like "why are you come back?" and then he will appear in the form of an eye above the wall in the room near blue spawn. You have to shoot in the eye to see the cutscene with drawing and to get to the screen with the <o> tag and exactly on this screen (without leaving the game) you should type Konami code. Then log file will appear in the folder with exe file.

I think this is a hint from the developers) The game can't create or load .sav files and the "memory address" is exactly the same as in the log file!

Guys, I think I have found (maybe not the first one) something related to possible secret ending in the game. As previously described, If you leave the game as the developer said, but then return and again capture two flags - the developer will reappear in the form of an eye and if you shoot at it, then a cutscene with a drawing will appear.

I still think that the drawing represent the "1" digit, the beginning of the Konami code and Enter button. After the cutscene we get to the blue screen without any servers (like in the "deliver the last flag" ending) but with strange <o> tag on the top.

And the most interesting part: if we will enter the Konami code EXACTLY on this "<o> tag screen" - the game will not just reset BUT: 1) The <o> tag will remain on the screen with servers list 2) In the folder with the .exe file of the game, a log file will appear with the <o> tag inside and strange text about the game! 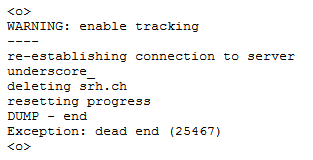 Buuut... Then I got stuck. I think that this "Exception" phrase about "dead end" hints to us about existing another ending but I have tried to enter the numerical sequence anywhere in the game and nothing happened. I suspect that we have to do something on the second <o> tag screen with servers list but I don't know what exactly - choosing the server on this screen, apparently only launches another round of the game without any changes.

I hope that something from this info will help to community to find a clue, thanks a lot to the developer for such interesting game and mystery around it!

Sorry for the mistakes if there are any in the post)