lol yeah that should happen of course :)

lol most of them are great. I love hearing ideas from everyone. It helps my brainstorming a lot. Some of them just aren't in the direction I am going. I have an idea for "pets" you'll be able to deploy. Maybe one should be a robot llama with a turret!

Open a folder and type %localappdata% into the search bar. Then go to Sand Alpha folder and then delete the rm files.

lol yes... I think that should be a thing! Added to the to-do list

Interesting... I'll look into it.

You'll also need to hook the robot to a powered switch.

Fixed it. It will be in the next patch (tomorrow?)

You'll need power, enough water, enough seeds, and enough storage space for the veggies, for the robot to farm. I'll check to see if this is working as well.

Ok I'll check to see what the issue is.

did you build a trading booth? I'll check on this.

Yeah I think it is a game maker issue with the saving. I'll have a proper save or auto-save feature in the future.

oh lol I should fix that :)

how are you quitting? Through the esc menu?

lol this is already in the next build :) 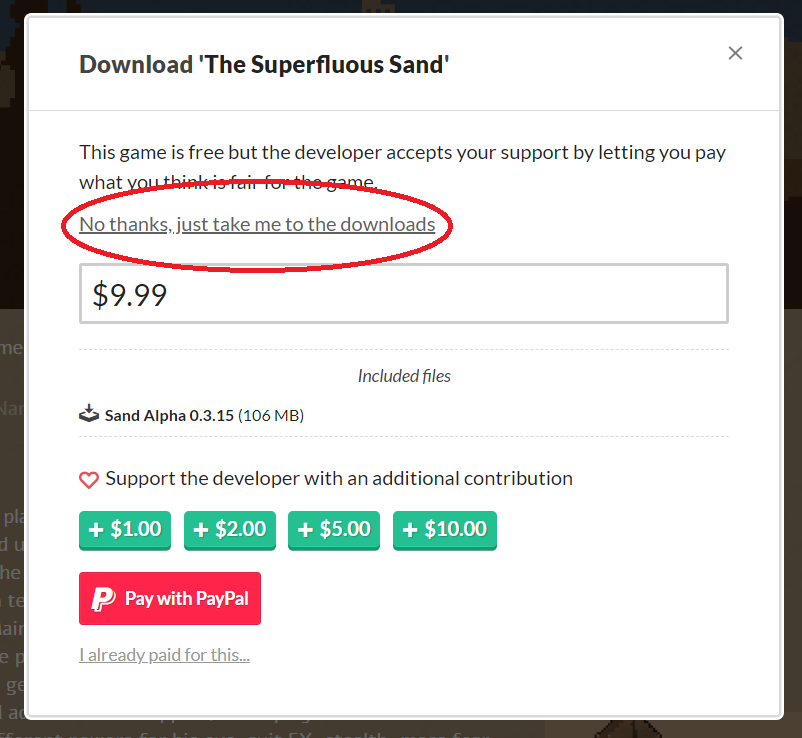 Yes! If you donate 10$ or more (here on itch.io) I'll make sure you have a STEAM key for the full release.

Also, you can build an "player upgrade" item and upgrade the amount of ammo you can hold!

- being rescued :  This was in the game at one point. Your followers could revive you. It probably should be added back in.

- watch towers : I like this idea. Maybe have a siren that goes off or something

- special non craft-able items as rewards : This is planned

- special people joining your cause :  I have a lot of neat unique followers planned

- diplomacy / requesting help :  I've thought of some sort of rep system. Still trying to figure out how it would work

- turning into a cyborg :  I am planning a suit (like a exo suit thing or something) that will give you science powers [no magic though]

There is also a tutorial for electronics 2 squares south of the base.

Yes you can go up to a relay and clear them (it is one of the options). Relays attach to relays and provide power (without hooking them up) to switches. The switch is attached to doors.

Glad you liked the game! I have so much more to add :)

Raids: Yes there is a lot of improvement to do with these. I think I might have made them too hard at first. They need some balancing. I'd also like to add special mobs that run in a take/destroy crates (which would destroy some goods too). Also higher tier raids that come in waves.

Armour Variety: Yes I just added these awhile ago. I plan on having different quality of gear crafted (based on some crafting skill or something). I also plan on adding lots more armor types for sure.

Custom Worker Tools: My initial plan (which is still the case) is that the workers would craft their own gear based on their professions. So the gear would break and they would have to rebuild it. If they couldn't they would just use their hands which would be slower or less productive.

Delete Obj Glitch: This must be a bug in the version you have. Although I checked the latest version and it isn't happening to mine.

Base Expansion: I was thinking about adding abandoned towns you can take over and make a base. With stuff already built, but destroyed.

Reply
The Superfluous Sand community · Posted in HOW TO BREAK FENCES AND OTHER STUFF?
Voided Pixels Studio31 days ago

Thanks! Adding more and more every week :)

That bee a crazy idea.

so he rides a llama if he isn't following you?

Yes, I think so? lol I am not at my computer right now. I'll check when I get home.

Nice. I'll fix it. Does it work on anything other then cotton trees?

hopefully it is faster for you.

Okay I think it found a fix. One I should have done a long time ago. I limited the number of popups AND forced them to stack so you can actually see the text. I removed the XP for now. I'll probably add it differently some how later.

I should probably just disable them for now.

Duke is a companion. Right click on him and we will follow you around and shoot things. He doesn't work. The three people are you, Duke, and the other guy. Only the other guy can have a job.

Also the health bar only appears if the worker is hurt.

Done. Will be in the new update tonight.