I totally respect that decision. I think fixed camera is a really interesting component. The camera is located in areas that direct your attention towards the focus and it adds a certain cinematic element to the game that works out in a really cool way.  I like the fixed camera I was just thinking if there was an option to move towards the mouse instead of A and D, however I don't have any experience making 3D games, so I'm not sure if this interferes with the camera

I kept having an issue where my mouse would reapear in between scenes, any way to fix this? (I'm on mac)

Testing it right now, I'll let you know how it runs :)

It runs fine on mac, i tested the whole thing, until the part where it says "I told you it wasn't finished"

Reply
⚙️ SCREAM MACHINE ⚙️ community · Created a new topic Do I have to submit if I join this jam?
tn21992 years ago

I'm fairly new to how these work, and I don't make games, but I'm really interested in seeing what people make, I clicked "Join Jam" so that I can see the games that are released at the deadline but I don't know if there's a penalty for not submitting.

I get so pumped when I saw you released a new game, any ideas when it's coming to mac?

I hosted a server by clicking create game in the multiplayer menu, and I added bots to the game, but in game the bots look like the diamond shapes in the screenshot 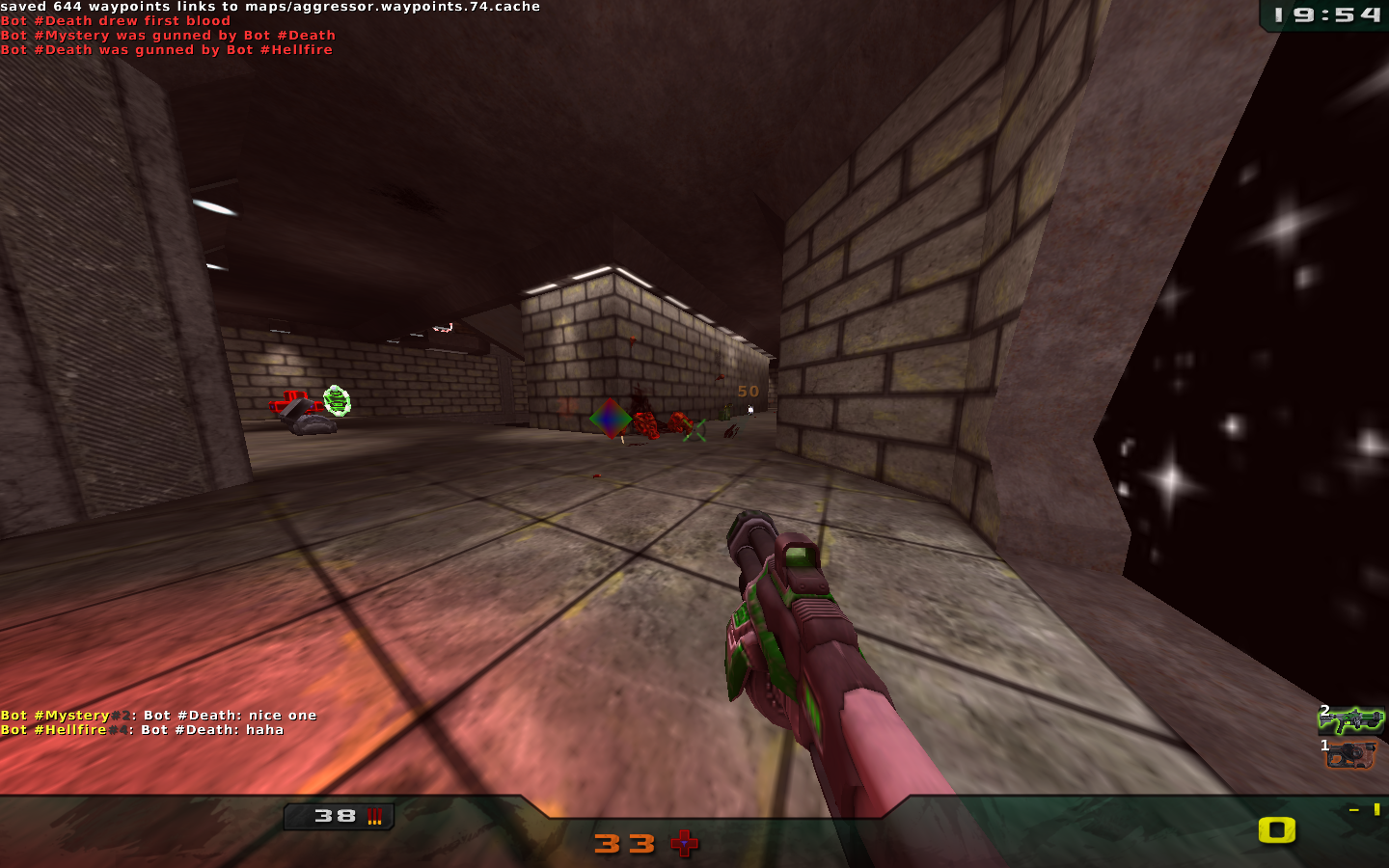 I ran into a problem when I host a server, the bot's models dont show up, in some games there's a "force player models option" that makes it so that every player/bot's model shows up at the cost of them all having one, I was wondering if there was a similar option here that maybe I wasn't seeing?

If anyone knows a fix please let me know

I've run into a really weird bug where the brightness will go down a few seconds after I open, if I change any graphics option it goes back to normal, but after a few seconds it goes dark again, any idea what's causing this/how to remedy this?

*edit: this does not affect gameplay

Thank you so much for the reply, cant wait to play when it's ready :)

I don't know if it was just my computer, but there was a delay to the turning. I've played other games with this control scheme, but I feel like for a game like this with more gunplay and running away from zombies, this ended up being something that made the game less enjoyable, as I often got killed while waiting for my character to turn a corner, or while trying to aim my gun. I was just wondering if it would be possible to add a mode where you use the mouse to stear

I loved Project BlockchainZ, and I really wanna play this, any ideas when/if it might be available on mac?

I would love to try FallNation but it's not available on mac :(

Can't take back the love that I gave  you

Is there a way to save? I've found that the average play duration of this game sits around 3 hours and could be much longer. Because of that, a lot of progress is made in one sitting, but there isn't really a clear way to save. I don't know if I'm missing something or if this hasn't been implemented yet but I just wanted to post about it so that the game could be even better than it already is.

I think you should add the ability to spam the button. Even if it doesn't do anything, I think even just having the sound would make it scarier, since I think that it adds an element of panic.

I liked this game a lot, but I think one way that there should be a sprint button.

The game is scary, and that is obvioudly the intent, but I think that adding a sprint button can make this be reflected in the gameplay. It doesn't make sense to  just walk slowly when being followed by a bunch of nasty little men, I think most people would run in that situation. I can understand the reasoning behind not putting in a sprint button as it would make the game easier, but I think that if you also made the nasty little men go faster when this button is pressed, it wouldn't affect the gameplay.

Adding a sprint button won't change the game itself, but I think that it will make the game feel scarier to play.

The original resident evil and silent hill games came a bit before my time, so I'm not as used to the controls as much of this game's audience likely is. That being said, I understand that these controls help bring make this game like those games, and could be a something that could potentially draw in a lot of fans of the original silent hill and resident evil games. However, I think that maybe if there was an option to use the mouse to turn instead of a and d, it would be more comfortable to non-veterans of the genre. As of writing this comment, I have not yet finished, and i'm sure that i'll adjust as a play more, but I just wanted to put this out there, as I'm sure a lot of the people here are already use to this control scheme.

(PS, I really liked what I've played so far)

*Edit: I have beaten the game and over time it did get a bit better to control however I think my original point still stands

Would this game be possible to be ported to Mac?

The concept and style of the game is fun, but as many people pointed out the performance isn't that optimized. I turned on the FPS counter and it says I'm getting a good FPS but it runs slow still. My one MAJOR complaint is the motion blur. I think if I was able to turn this off I would enjoy it a lot more and not have any issues with it :)