Kitty Rainbow is a 2D platformer where rainbows are your platforms as well as your weapons and shields. 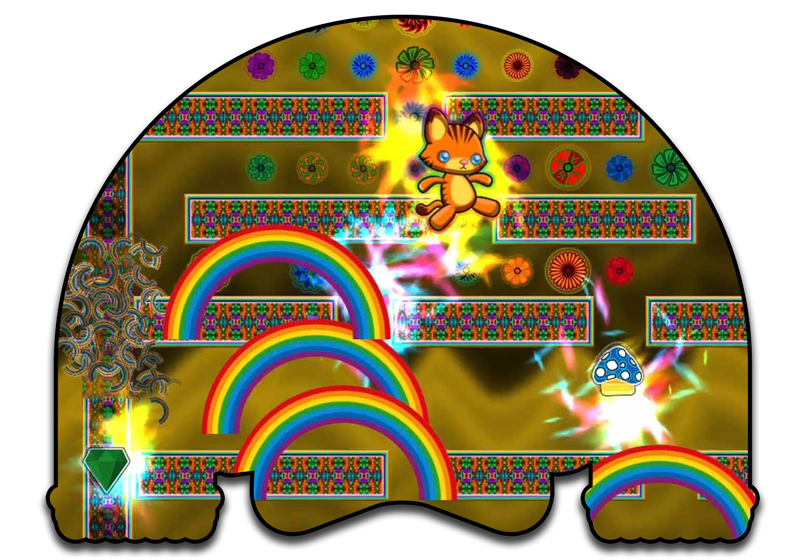 You play as a rainbow-wielding cat on a mission to spread brightly coloured joy by removing bumble bees, off-beat music, and other unpleasant things. Your rainbows protect you from the bad things that can kill you and also provide you with platforms to walk and jump on.

You are the bomb

BombFall is a fast-paced, tactical, 2D, arcade game where you play a bomb falling through the sky. You traverse three stages of Earth's atmosphere freely moving within the flight corridor towards the target cityscape.

You have a super tough nose that bashes obstacles as you fall. It flashes green everytime you hit something and causes you to briefly bounce upwards. You also "collect" clouds as you destroy them, charging your manually activated retro booster.

Don't step in the vomit.

Loot Monkey: Bling Palace is the sequel to Loot Monkey, a 2D, flip-screen platformer that tests your wits and your patience.
Set in the Bling Palace of the Evil Overlord, you play as orange monkey servant Dougie and must visit every room of the Bling Palace to collect all the loot that has been left lying around following a big party.

Dougie must avoid moving enemies as well as static hazards including copious piles of toxic-looking vomit. Dougie can explore any room in the Bling Palace in any order as he has access to all the rooms.

As a sequel there are the same features as the original Loot Monkey (including the practice mode) as well as loads more rooms to explore, more enemies to avoid, lots of bling to collect, high scores and a lot more loot to collect.

Be a clever, brave monkey and gather the master's loot and don't step in the vomit.

Loot Monkey: Bling Palace is also available on the Nintendo Switch (link to follow on Itch page as soon as shop has been approved)

Loot Monkey is a 2D, flip-screen, platform game very much in the style of 8-bit platformers.

You play as Dougie, monkey and servant to the Evil Overlord, and have been instructed by your master to collect all his loot from his estate. Every item of loot must be collected from all the rooms to win the game and receive the master's reward.

Dougie explores the master's estate in any order he wishes. Dougie moves left and right and jumps to almost his own height. Being a monkey he has also been known to occasionally resist falling when near a wall. His abilities are useful for avoiding the Overlord's pets as well as the traps and hazards scattered across his master's estate.

Be a clever and brave monkey and gather the master's loot before a hero arrives to steal it.

It is a mission-based game where you pilot the SS Harmony (a.k.a. The Obliterator) and complete objectives for The Committee in order to further the expansion into space.

I need help finishing this game. Obliterator is currently 90% completed - it is in the last phase of development.

Please read the Devlog and game page at https://tackorama.itch.io/obliterator