This jam only starts in a month so that should work out - but yeah, feel free to add me on discord!

Couldn't find you on Discord, but if you're still looking for a team, I'm a developer & composer and would love to work on a project! My discord is: Dustb0#1368

The demo is free, but Part 1 releasing July 1st will be a paid release. Thank you so much for the kind words! :)

Haha that's the struggle! Thanks for playing!!

Hey there! :) Thanks for sticking around and your kind words!

So the 2017 demo which you played contained Chapter 1 and a tiny preview of Chapter 2, the first few minutes.

Part 1 releasing on July 1st contains the whole of Chapter 1 and 2 which will take the story way past the 2017 demo content. But it will end on a cliffhanger as Part 2 will contain Chapter 3, the last third of the story.

Sorry not yet, but that's a good idea!

this might be my biggest news update so far, so buckle up: The main trailer for Numina has just been released!!!

Also Part 1 of Numina will release on JULY 1st here on itch.io and Steam for Windows, Linux and MacOS!! Everything shown in the trailer will be part of that release. 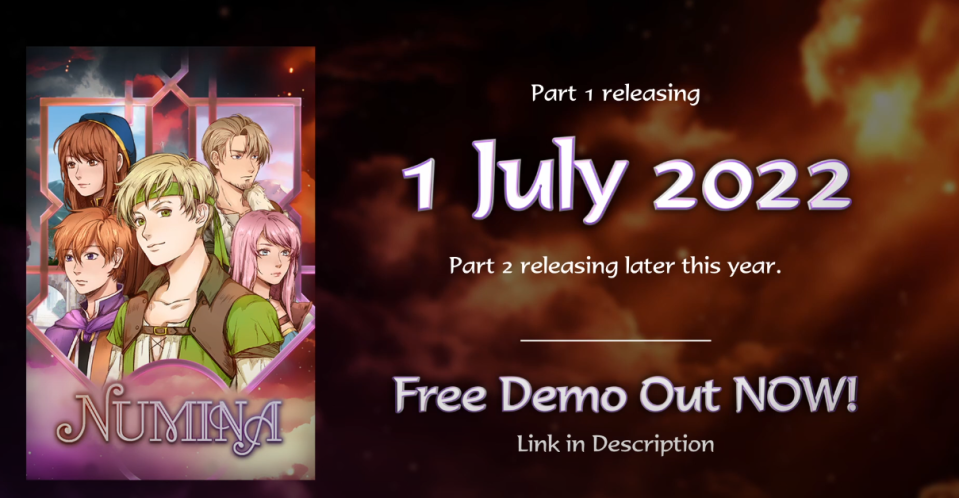 But (!) there's one more thing: You can NOW PLAY A FREE DEMO! Which contains the first hour of the first chapter showcasing all the improvements and changes since the 2017 changes and hopefully giving everyone who's new to Numina a good impression of the game.

It's obviously shorter than the 2017 demo, mainly because this demo is meant to showcase the game, rather than just being a full-blown chapter release of the main game. Even if you played the 2017 version, I invite you to try out the new demo since there have been plenty of changes since that release!

Everyone, I'm beyond excited about this huge milestone and even more thrilled to hear your feedback on the demo (and Part 1 once it releases in July!!!). I am very grateful for all of you and I sincerely hope that you'll enjoy, what I've been working on these past years! ❤️ u all!

Yes, I have revised the initial pricing to reflect this change. Also just to clarify: Part 1 is probably 2/3 of the entire game - so the split isn't exactly half / half. But Part 2 will definitely be cheaper in accordance to that.

Oh that's a very good point! I'll note that down for a future update!

It doesn't have that functionality yet, sadly. But that could definitely be a useful feature to add in the future.

Only before the deployment :)

Looking for Betatesters for my 4th wall-breaking RPG NuminaHey everyone!

I'm looking for 3-4 betatesters who have time within the next 3 weeks to test my retro-inspierd RPG Numina! An exciting adventure that centers around you the player as a bodyless voice in the other protagonists head!

Thank you so much for your interest!

Thank you! You too!

Thank you for the suggestion! I'll check the server out :)

Thanks for the suggestions! :)

Thanks for getting back to me! I've uploaded a Fix which handles irregular Map file names better now :)

I just posted an update that should fix this issue. Let me know if the problem persists for you :)

Hey there! Sorry you're having issues with MVFinder! Yes sending me the project files would be the best. The /data folder would be enough. You can send me a zip of it to numina.official@gmail.com

Hmm, hard to guess what's wrong. I did upload a new version (1.7) of MVFinder now. If there are any problems during loading at the start an error message should show up now with some details.

Does it display any error message? Or it just doesn't show up?

Hey there! Thanks for sharing, I'll definitely check your video out :) Hope you had a good time with the game!

Hey! Thanks for taking the time to leave this comment :) Happy MVFinder was useful!

I'm still testing the game before opening it up to betatesters. You can see me playtest a bit of the 1st chapter from a recent Twtich stream:

I also finally updated Numina's itch.io page! It now reflects the upcoming release's new features & changes from the 2017 demo (which you can still download).

Not sure if I'll be able to do another Stream anytime soon as I want to focus on testing the game. But let me know if you'd like another one :) It takes a lot of time to go through all the different variations that arise from the player's choices. And I want to clear out any major roadblocks before involving more testers.

I know this is a rather short update but if you want to get any future updates & news on the release or just to chat with other lovely people join the official Numina Discord!

See you next time :)

Okay, you can check beforehand in the Control Panel in the section where you can see all your installed programs or uninstall them. There search for ".NET Framework" and see if 4.8 is installed.

You can also directly download it from Microsoft: https://support.microsoft.com/de-de/topic/microsoft-net-framework-4-8-offline-in...

Let me know if this helps!

Which version of Windows are you running?

On Windows 10 it should already be preinstalled for example :)

Hey there :) Thank you for your comment & I'm happy you're having a great time with the demo.

I'll announce the price once the release date is set for the game.

with this post I want to celebrate reaching a huge milestone with you: My 4th wall breaking RPG NUMINA finally reached Alpha status! What does this mean? All major story content has been finished and I'm now testing the game for any major roadblocks & polishing things up. Also:

⚠ You can now wishlist Numina on Steam! https://store.steampowered.com/app/597060/Numina/ ⚠

The game will also be available on itch.io at the same time (release date TBE, see below). Even if you don't plan to buy the game on Steam, you can show your support by wishlisting it because it will allow me to gauge general interest & plan the next steps ahead.

What's next? After finishing my initial test (and hopefully removed any game-breaking bugs 🤞) Numina will reach the (German) Beta-phase: A bunch of lovely testers will play the German version while I'm translating roughly 80'000 words into English & doing bugfixing. After that comes another round of Betatesting for the English version to spot problems with the translation. Only then... Will we reach Gold status which means the game is ready to ship!

As I want to ensure you all get a good experience on launch without many bugs, I want to make the testing phase as long as it needs to be. So there's no release date as of yet, although I'm aiming for late 2021.

Now please check out some screenshots showing off the upcoming release!

Thank you! Hopefully I'll be able to share the full release soon :)

Hey, thanks for leaving  a comment! Never heard of Ar nosurge before but what you describe sounds like a very interesting approach to the whole 4th wall breaking topic and I always had a soft spot for RPG's set in the modern era or the future.

Omg I missunderstood what "Full Audio" referred to. Thanks for pointing that out because the game won't have voice acting.

it is, right! I can't really believe it myself ;_;

There's still a lot of work ahead of me. But I'm very grateful for your support thus far and all your comments on the devlogs - thanks for sticking around!

Happy to tell you that the next release will also be available for MacOS and Unix :) So please stick around for updates!

Hey there! Thanks for the suggestion :) I can't promise anything but I'll definitely add it to the backlog for future releases.

Wow thank you so much for your kind words! :) I'm happy that it made you nostalgic of older games in the genre because that was one of my sincere goals, to incorporate elements that I loved from the RPGs I grew up with. Thanks for sticking around!