You can actually get the game directly from Side Quest. Search for Hell Defender. Note that the game is not available for PC VR.

Thanks for the kind words! For now I have to focus on another project, but I will eventually come back to making such games :)

Great game. I played more than I anticipated. I love how the game screen is layed out. It's like playing an old electronic game. I'm always a bit sceptical about gamepads on touch screens though. It lacks the physical feedback. Maybe I should buy extra hardware? I miss the physical buttons and joystick.

Thanks! I recommend you try PuzzleScript if you have any interest in it. It's a great tool. I use it as a reference whenever I try to design a good framework to make games.

It is :D But it's ok, it's the reason why I enjoy designing such games.

If you enjoyed this game and want more, I recommend you try my other game Puzzle Adventure. It's about 1 hour long.

I've started making the game multiplayer, and we have a plan to add more weapons, enemies, make a better map... but I have no idea when/if it will be done. Thanks for playing!

This is sooo cool :) I Love this one. Thanks for this gem.

The art is incredible as always! Love this style. The controls don't make me feel very powerful or in control. I can't slash while moving for example. That's probably a question of taste in the end. If go up of down and then stand still, the next slash is oriented left.

Sometimes I wonder if you'd be up for collabs? Please hit me if you want to discuss it :)

Great game! After finishing the game, I had to retry the first area to find all the secrets. For me the first boss was much harder than the others? Also it was my only struggle point the first playthrough. The pattern is just hard to understand, which felt like a small puzzle. The second playthrough I beat it on first try. Really cool game, I had a lot of fun :) Love the art as well, but that's a constant in your games.

Such a cute game once again ! Love the music as well. Very chill. The mechanic itself is really clever.

Really cool game! The hand drawn graphics are cute and clear. music is relaxing and moody, gameplay is challenging but fair. Those canons gave is a Braid feel I really enjoyed. Keep making games \o/

After you've placed the laser in the right orientation, you have to shoot the laser using the button in the bottom right. The laser beam is not displayed yet, and the laser sprite is just some placeholder, so I understand how confusing it can be. I hope some players will be able to reach later levels, as I think there is some fun and interesting challenge in the core mechanic. Again, thanks for the feedback! We're working on those problems and should be able to update the game before the deadline, since it was extended.

I was really surprised by this game, in a good way. I always wanted to make a game like this, where I guide the player through my train of thoughts. The game looks really nice, the UI is super clean, and I didn't mind it being a bit slow, although I admit I prepared a geek salad while playing (which explains a few burned popcorns). Sorry if this is weird. You started it.

I would have changed a few things in terms of mechanics for each idea, but I don't know if this is the feedback you're looking for. I was excited by the rhythm game idea, but as a player I really want to click on the beat, and this one was out of sync for me (offset, I had to click before the beat). I tried making a rhythm game before and had the same issue due to syncing problems. Not sure if this delay is by design or a software issue though, as I only tested it on my computer. Also when making popcorns, I would have liked a much smaller delay between each drop, as I don't really get the proper feedback for my actions (clicks get discarded). I know you need some delay to avoid memory/collision issues, but it's just how I felt about it.

Anyway great game once again! I'm glad you made it, as now I know what the idea can lead to :D I might do one on my own one day! Cheers

Thank you so much for your feedback! I understand it's not very easy to get what you're doing, as the game lacks a proper tutorial... I'd love to know where was the breaking point for you though, so we can improve it. Like what level did you reach? Did you pass level 1? Thanks!

Really cool game! I enjoy the fact that it's turn based, it makes it more puzzly than usual for this kind of games. Visually it's simple yet very polished. I would have preferred having only one life but not having to restart the whole game after loosing, but maybe it's personal preference. I like how you handled all the edge cases, it always seemed fair (probably because they're all winning hehe). Well done Ludivine! Looking forward for your next game ^^

Thanks for playing and for the video! I'm glad you enjoyed it ;-)

It's a neat idea! So you started working from PuzzleScript sources? I'm currently working on a PuzzleScript remake in Godot, because I also want to extend it. Maybe I'll open source it at some point?

Thanks for playing the game and for the super positive feedback Joshua, I know you don't say those things lightly and that means a lot to me ;-)

Thanks for playing until completion! Wow, more than an hour of gameplay :D As usual, I had a very good time watching! Keep it up buddy

Truly loved it! The mechanic made me consider all the possibilities and my imagination was always wandering. The art is top notch as usual. The particle effects (dust and flame) are subtle and fit the mood perfectly, and I really enjoyed the music as well. The story itself is very rich and diverse. I guess you took a lot of inspiration from Critical role?

Oh and I was sad that I had no time to read the last page of the book, it fades to white immediately. I guess you want to wait for an extra click there.

It was a nice surprise to find the gate to hell on my way to that 5th delivery without receiving a single tip from these ungrateful lazy customers! I laughed when the first demon rewarded me with a 3$ tip and thanked me for the pizza. I expected those to be enemies. Cool story! The gameplay was a bit too hard for me though, not sure why. I guess it has to do with how the car turns, and how the camera is moving with a delay. Also I think the timer is either not reset correctly between deliveries, or not adjusted fairly according to the distance from the player. Anyway great job on your entry! Thank for the game ;-)

Excellent visuals and feedback for your actions! And the background ambient music is pleasant enough to still be enjoyable after 20 minutes of gameplay. Oh and I almost forgot the engaging dialogs, I really had a great time reading. The game is obviously super polished! Well done ;-)

The next thing is not specific to your game, but rather most of the games in this genre. I think the game lacks meaningful choices and things you can really learn. I found myself buying stuff while I didn't really know which one was the best and I'm not even sure there was a true difference. As long as you keep investing (and clicking a lot) I think you're good? That's my feeling after finishing the game at least. My point is I would love to see such an addictive and masterfully crafted "package" put to use in a deeper, more challenging game. Please? :D

I like the idea of a one dimensional multiplayer game, and good job on the back end part. However it's hard to give proper feedback since I was probably playing alone? Maybe it would be nice indicate how many players are connected and where they are located. Even better would be to have a few AIs in there so you could at least play when nobody else is connected. Well done, looking forward for your next games!

Interesting controls! And very cute overall. Good job for such a small amount of time :)

The solution to this one is very much simpler than it seems ;-) Don't look too far for the solution.

Actually it's done. I'm wrapping this up.

Thanks! Still working on it until tomorrow I think. I'm adding some sfx, smoothing out the difficulty a bit more, and probably rewrite the whole story.

Wonderful! Very inspiring as well. I'm glad Puzzle Script has an undo feature, these are quite hard :D

Congratz for everything you've acheived so far! Wonderful colors and cool idea ;-)

The game looks really cute! The music gives it a very chill ranchy mood, love it ;-) I like the idea for gameplay, but I would have enjoyed a bit more control. It's a bit to hard to make them go the way you want, and sometimes they just go crazy and you can't stop them if you're at the other side of the map. Awesome job guys! Keep it up.

Rough graphics but fun gameplay! I know how hard it is to sync music to gameplay so hat down on that. The way you have to anticipate for a timed reflected shot but also watch out for the dodge is really interesting and it keeps the game tense.

Very nice game! Quite hard too. On second or third try I realized that staying in one place the whole time is much easier because you are actually much harder to hit, and you can even destroy ennemy projectiles that are in front of you to defend. It felt like cheating since the game is much harder (and more fun) when you actually move. This is my final score : 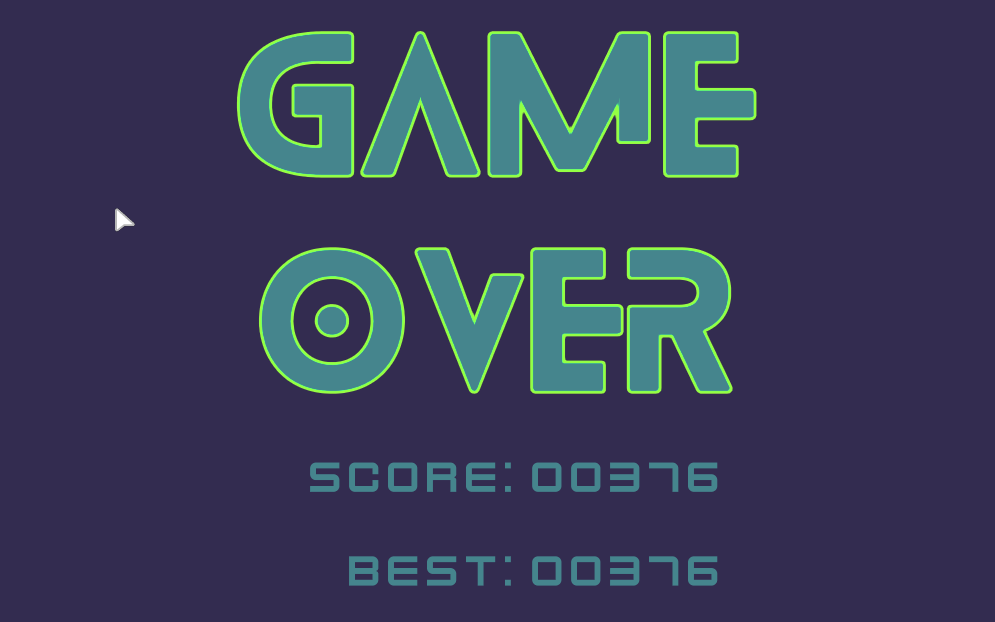 Love the music and graphics, and the controls feel really nice.

A cool little adventure game! I had a good time :)

Thank you so much buddy! Awesome voice acting, as always :D I've rewatched the whole thing a few times now. Makes me happy every time.

Thanks! Way overscoped for an LD entry but it's by far my most played game.

The controls are amazing. So much content too! Great job. I would say "as usual" but I enjoyed it even more than usual.

Haha I'm glad you enjoyed the game! Our tester scored over 6000 but she won't tell me her strategy (I think she hires orange workers and uses a ton of coffee). I'd be glad to have a small conversation with you if you have time. If you are up for it, please contact me (itch, ldjam, twitter, discord...). I speak French and I think you too?

Haha xD Not my intention but I can understand the feeling!! I hope you can find your gray car sandbox ;-)