So the 'victory' condition is to fill the score bar by creating combo's (sequences of two or more identical pairs) before.

Every time 'junk' is ejected from the sequence, the strand collapses, potentially creating more combinations.

So the eco. is deciding if making junk to enable larger combo's will fill the score bar faster than the instability hits its limit.
Generally I found myself that making combos of size 2 while setting up to make sets of three *almost* worked. Cheated to reduce the junk penalty and started having more success. (Fake ease/easiness due to practise?)

(UI/visually) have 'instability' and score extend from opposite ends of the same bar, to make the two literally oppose each other.
Try to make the instability less static/friendly so that it's meaning is clearer.
( ie: increasing instability grows tentacle like strings over the score meter. The tips/growing end of which thins out instead of pulls back when the instability is driven back.  A (hidden) bead marking displaces the tentacles at the tip of the score bar, for clarity.  I think this can be accomplished with a layered sprite and masks, avoiding actually calculating splines, though splines *would* allow the tips to wiggle...)

(UI/criticism) I kept getting confused that the next piece wasn't shown above, even though I 'know' that it's represented by the colour of the cursor.
I like the idea of showing a ghost/shadow of the piece about to be placed.

(criticism) combos didn't feel that rewarding. And I was often confused why this resulted in mismatched pairs sitting in the sequence after.

(UI) make the cursor mouse driven (or tracking). This would make placing the next piece following a combo much easier.

(gameplay) make the remnants of completed combos eligible for stronger combos. Be it a ladder like 2048, or just a +1 length bonus for every time it is used in another combo.

(criticism) Early on, too often I found myself unable to place a piece and had to wait to lose. Later I'd get screens without a match for any of the pieces I held.
(gameplay) perhaps allowing players to pair and 'eject' the piece they're holding with the one in the cursor as "an advanced" strategy would mitigate this.

Exited to Title with 4x speed set during a battle, and then checked the scene collection.

Found a bug in the WebGL version: the game is only adding "///" pieces to the board, trapping me in  [edit:]soft-lock with no way I can find to forfeit/skip to the map screen.  I let it climb to 20k before closing, but I've wanted to skip the level end bonus points for a while now. 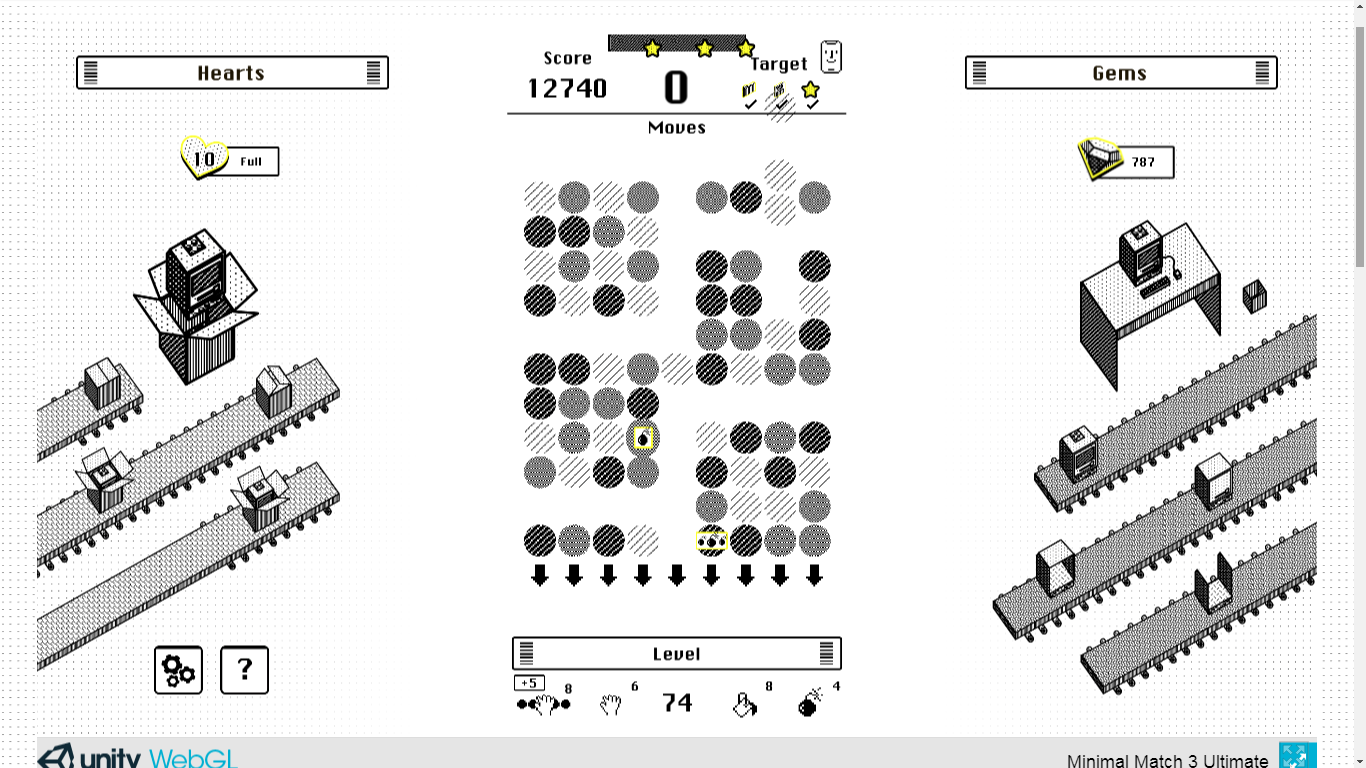 I enjoyed this- Particularly how consistent and simple the interface is.  The stated goal of being able to play without seeing the screen has clearly informed the rest of the design.

Also;
I noticed that 'Wraith Wail' doesn't actually set player.defense = 0 when "You lose all your defense."  Was this a bug?

I seem to be unable to breed humanity far above 🌾 975.60 Qiunt without it their stats rolling back down to 🌾 1.

(After testing with the debugger) If I limit my breeding pair's "farming" attribute to (🌾 975609756097560700000) then there can be no 1's, but then autosell won't empty slots containing humans rated above that;
But the higher I allow the stats to climb, the % of lone humans increases.

Is this because of extreme inbreeding?  Using the debugger to make a breeding pair with 🌾 1.45Z projects 🌾1-1 offspring.

I'm not an equestrian, but only brushing from the root to the tip seems like a good way to cause all sorts of tangles.  Makes me wonder if there's a simulation game about brushing hair.