Brackeys Game Jam 2022.1 community · Replied to Pyrimix'n'Cube in All around game dev looking for team members
sirtrumpetbot304 days ago

also what engine were you thinking about using? If the code is close to python or Javascript style then I may be able to help with that too.

Reply
Brackeys Game Jam 2022.1 community · Replied to Pyrimix'n'Cube in All around game dev looking for team members
sirtrumpetbot304 days ago

yea sure. Could you send me details about the team?

Hello im a game developer thats probably best at programming but also 2d/3d art, animation, level design.  All of my experience is in godot, and HTML5/Javascript. SOOOOOO if I was to program, than it would have to be either a godot game or a browser game. So if you want to team up or see some of the work ive done hit me up here. Discord is sirtrumpetbot#9451

Cool little game! The art style is great and instantly drew me to your page you definitely have a talent in seamlessly putting together a simple idea and making it look beautiful. The controls were a bit different than what i am acustomed to but i picked it up pretty fast and intuitively. It was nice to try something new. I will pay attention to future titles from you.

Hey everyone I'm a traditional Artist looking to fill in my portfolio so I offer my free services unto you all, any of you or whoever has the most appealing project/idea. Here's my artstation: https://www.artstation.com/artwork/Kr8znr

sorry it's been a min, you can contact me via Gmail at sourassourdoughbread@gmail.com

I don't have a discord should I get one?

Reply
itch.io Community » Game Development » Help Wanted or Offered · Replied to sirtrumpetbot in Looking for collaborators on a 3d rpg with lots of Diablo inspiration
sirtrumpetbot1 year ago

Unless you want a fully rigged beautiful game ready character like the ones you have in your game, I don't have those.

Reply
itch.io Community » Game Development » Help Wanted or Offered · Replied to Concofail in Looking for collaborators on a 3d rpg with lots of Diablo inspiration
sirtrumpetbot1 year ago

Im not sure why you want to see my character modelling skills but heres Gordon Ramsay anyways. The screenshots I posted above are all I have for the game right now, other than some concept art.

Reply
itch.io Community » Game Development » Help Wanted or Offered · Replied to Concofail in Looking for collaborators on a 3d rpg with lots of Diablo inspiration
sirtrumpetbot1 year ago

Yea, I can rig, texture and animate them also

Im down to work for you for free. I have almost a decade of experience with blender.

Do you have work that I can see?

Reply
itch.io Community » Game Development » Help Wanted or Offered · Replied to mary_the_dandere in Looking for collaborators on a 3d rpg with lots of Diablo inspiration
sirtrumpetbot1 year ago

Im not sure what you could help with tbh. Im looking for more quality work in a collaborator and your stuff doesn't cut it. Keep learning.

Reply
itch.io Community » Game Development » Help Wanted or Offered · Replied to evilsn in Looking for collaborators on a 3d rpg with lots of Diablo inspiration
sirtrumpetbot1 year ago

Howdy I am looking for developers of any sort (artists, programmers, etc.)  to help me with an idea. In the process of just trying to get a prototype going and I already have it visualized.

Based off of the visualized idea Ive been able to decide which assets I can make modular to speed up art production so in the span of 3 days, Ive constructed about 15 assets which can be used to create a variety of basic structures and environments. Still have a crap ton of work to do because im not making some polly pocket barely breathing world that you see in a lot of 3d indie games.

Like I said there is a lot of Diablo inspiration, mainly from what Ive seen of Diablo 4 and Diablo 2. I want that creepy gothic ambience, with demonic energy seeping in to the art lol. Also ive looked up a lot of 16th century architecture and smithery to get the assets right and realistic and seamless.

A bare bones story has already been put into place and is guiding the idea and my development process. So yes this is a story based game but not super linear, or at least I don't want it to end up like that.

So far Im using upbge to make models and I am already kinda familiar with the game creation process of it, but if someone jumps on board and thinks it would be best to work in a different engine, I am open to suggestions. Id use Unity, but I have no experience so I guess I am scared of it.

Finally my merits include pretty much everything but not being very good at anything except for art. Programming, I am mediocre at, but still capable. If you check out my itch page I have a raycasting game called Adventure Without Hell, which I programmed from scratch and that is pretty much the hallmark of my skill. AS FAR AS ART GOES, I am pretty well rounded, including music! I can make decent 2d art, whether it be concept art, textures or UI stuff. If its 3d I can pretty much do anything, make high resolution pretty models, make game ready models, animation (like a pro), light a scene, etc. Composing music is something Im good at as well. Not the music in Adventure Without Hell, that was kinda scrapped together last minute. Lastly Id like to think I can write a good story. I get the gist of it.

And to conclude here are some screenshots of the work Ive put together for this idea. This took me 2 days to do from scratch with Blender and Gimp. My next immediate tasks are to make animal taxidermies and animal hide rugs to detail the hunting prowess of the tavern keeper. Aside from that, more foliage and nature stuff! 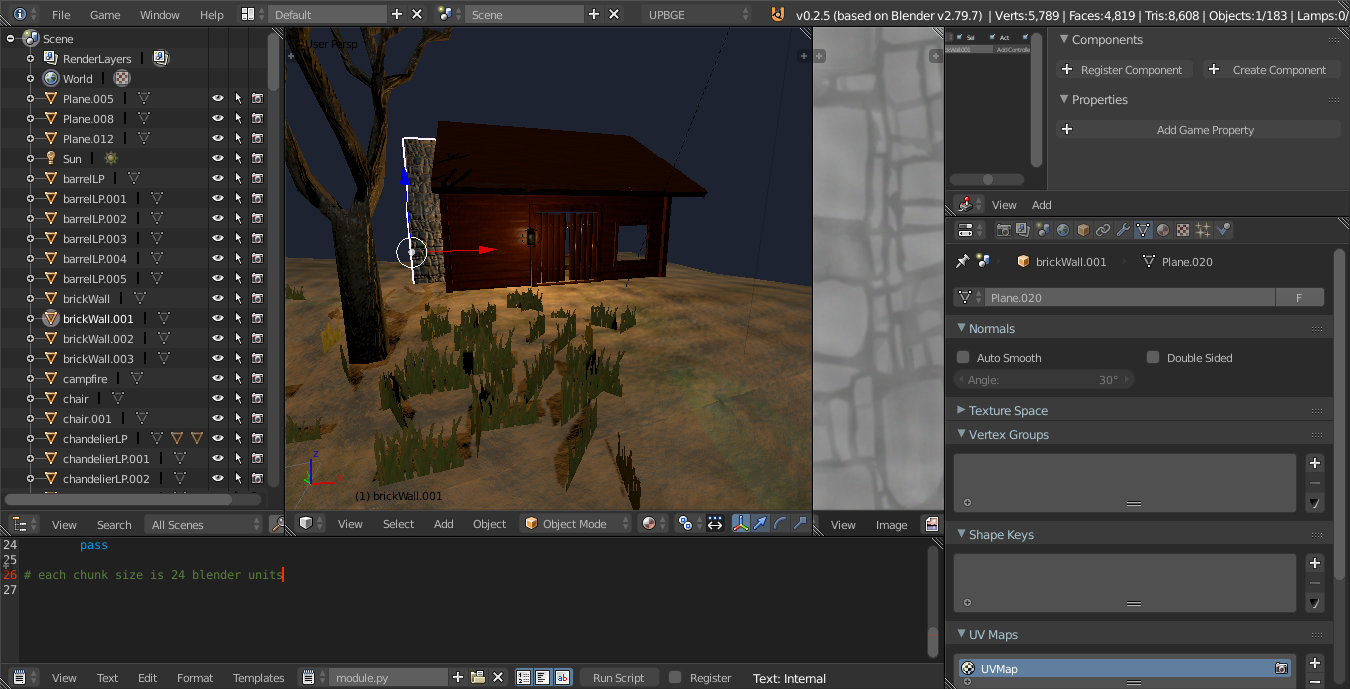 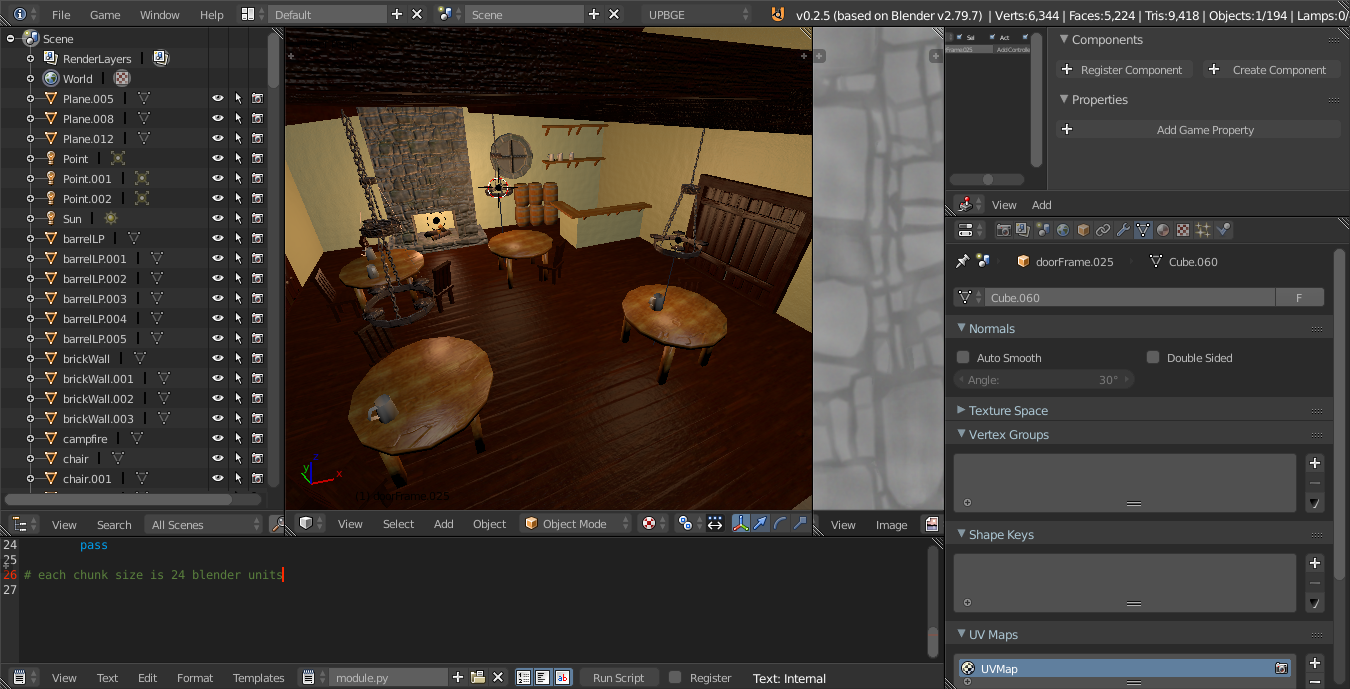