I thought all penguins use jetpacks to fly through the forest. How else would they do it? Thank you for playing!

They are all spitting seeds except for the pelican who spits fish (they have their mouths VERY full) The crow shoots lasers like crows do, obviously. Thank you for playing! Im happy to hear you had fun <3

Thank you for fixing it! I downloaded and played it again. The first time I tried, I did hold LMB on the tank and I thought it was doing nothing, but, with the certainty that I was clicking on the right place, I noticed it filling. The thing is that there is no feedback to let you know the machine is working. Also the tanks fills VERY slowly, maybe its a frame issue because of my computer, but it really seemed as if nothing was happening at first. I agree with the other comment that maybe it would be better if the machine worked constantly without having to press anything, that way I could let it work on the background and come back later to do some managing. I still think the game looks good and its a really interesting concept.

Hi, why is this an installable file? I would like to play it, but I dont like installing things haha. I can see it is the brackeys tutorial game, does it have some kind of twist or change?

This game looks really cool! Definitely not your average gamejam game. It has a lot of depth and potential to become a fully fledged commercial game. You can tell there is a lot of work behing this one. The art and sound design makes a really good horror atmosphere. Very nice job!

Hi I didn't understand how to play :(  The tutorial said to hold left mouse button on the syrup tank, but the arrow wasnt pointing at anything. I tried holding LMB on the different parts of the machine and nothing happened. Also You cant start over the game or replay the tutorial, so I had to delete the game folder several times to start over and see if I missed something on the tutorial. Can you help me? The game looks super cute on the screenshots and I genuinly wanted to play it :( 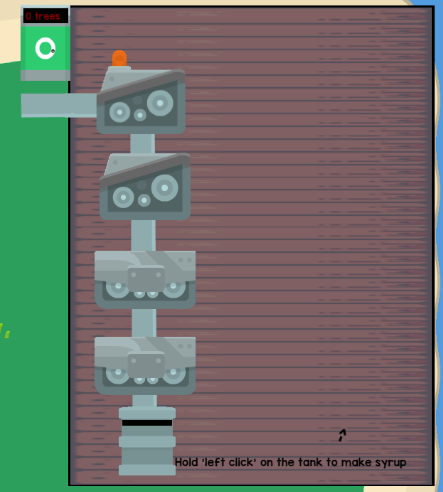 "Your futile efforts to maintain the status quo can only make our minds stronger and more determined." -Dr. Ostrich

Thank you for playing Grau! :D

This was a bizzare experience. Not every day you see a horror clicker game, let alone one where you have to run away from furniture! I did find the medium and easy difficulties a little too easy, I ended up killing myself on 1000. Hard difficulty was the most finger straining fun for me.

Thank you! Im glad you liked it

Thank you! Im glad you liked it :)

Hahaha we wouldn't even think about doing a game about birds without any ducks, that should be illegal!

Thank you! Im glad you liked the end result. For the story mode I also like the pelican, but dont underestimate the power of the duck for the endless modes! Thank you for your support as always!

Special thanks to 40wattstudio, Enriketti, MeDicenBoga and Grau for playtesting and general advice. You are amazing people <3

Hey, not bad! Thats a pretty good PB actually. Thank you for playing!

I had some people tell me about this issue with the gregorys running offscreen, but no matter how I try I cant seem to reproduce it on my computer. I will definitely keep trying to find the problem and fix it, thank you so much for reporting it and I'm glad you enjoyed the game!

Do they really produce money though? There is more Gregory games if you want to dive into its deep and fascinating lore ;)

Haha thank you so much! This is actually one of the best things you can say to me, I love weird games <3

What the heck?! This looks SICK!! That nebula effect looks so smooth! Will there be another demo before release? I want to see all of this in action!

Yes, it appears that when you change the game file the saves are erased even though they are the exact same as the previous version, I didnt know. Im terribly sorry about this :(

Hi again, I found the problem and should be fixed now. Thank you so much for telling me about this issue!

That is so strange! It never happened to me. Were you playing the web version or the downloadable? I will try to reproduce the error and try to fix it. Thank you for reporting it, and Im sorry this happens to you :( As soon as I can figure out whats wrong I will update a fix patch, it should have your progress saved until the point it stopped saving.

Hi! Thank you for telling me about this issue. Could you please tell me what version were you playing when this happened? We uploaded a new version about an hour ago that should have fixed this problem, but if thats not the case I will look into it again to fix it. Thank you!

This are all great sugestions and I agree that are important aspects of idle games. This game was made in 48hs for a gamejam, and it can be some time before we launch an update with more content. This week we will upload a fixed postjam version with the save system working and some bug fixes. Thank you so much for your feedback!

Yes, absolutely. I encountered this issue too. This shouldn't happen in the downloadable version, but we didnt have enough time during the gamejam to test the web build properly. We should have the new version fixed and with a working save system this week. Thank you!

Yes, as most idle games the idea is to let it play on the background and come back from time to time to collect your earnings. unfortunately I didnt have time during the gamejam to implement the saving system, and that is very important for this kind of game. Otherwise you have to be constantly playing until you win it and that can be boring. We are currently working on the save system so its more of a casual play for a while expierience. Than you for playing!

Thank you for playing, Im glad you enjoyed it :)

Am I... scamming people?  Nice game vlad, i had a lot of fun playing it. At the end I almost new the letters by memory, Im an excelent scammer it seems hahaha

Mr Warrrkus, this is just fantastic. I dont remember the last time I enjoyed a gamejam game this much. Yes, I do remember... Oceanwork... I simply loved it and will definitely try to get a better rank.  I found your easter egg room! Also, as much as I enjoy fighting Ganon, I think I dont need to tell you wich was my favourite boss... With a name like that you just have to love him!

This one is REALLY hard! I will keep trying and trying, but so far I havent finished the song once because of frustration resets.

Thank you for playing! I'm really happy that you liked it!

Haha I'm guessing you didn't like it? That's tottally fine my dude! This is a 5 minutes narrative expierience we made in a week for a gamejam. I apreciate you took the time for playing it!

I just played the entire game again and it the music does different things. Maybe they are similar and I was too focused with the puzzle to realize the differences. I think 9 levels is more than enough to showcase the game and you did an absolutely impressive job!