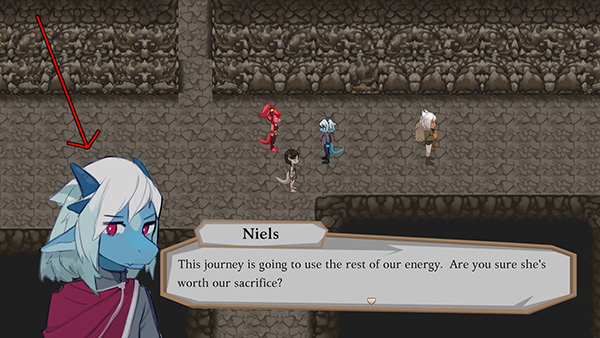 We are finishing up production on The Kobolds Left Behind and need to get some busts for our speaking characters.  (WIP Example above)  There are a bunch of these to make, so I was thinking it would be helpful to bring on an additional artist to focus on these specifically and get them all done.

We have four speaking characters, with a total of 74 expression variants.  Many of these will share the same base image, but just with slightly different facial expressions.  For instance, Neutral and Serious could be the same base, but just with different mouth lines / eyes / eyebrows.  Or Happy Blush is just Happy but with a blush layer added.  There are a couple which may require redraws / head position change, such as Facepalm.

To apply, please E-MAIL to:  jobs-2d-art@archiveentertainment.com (PMs I don't always get notification of, so please e-mail)
- Please include a link to your portfolio or attach past examples.  (I am looking for someone who has some prior example of art in the same style and can make these sorts of characters.)
- It would also be helpful if you can please include a rough cost estimate and rough expected duration.  (Cost-wise, please keep in mind this is a low budget / spare time indie project :)

Thanks for your interest and hope to hear from you,
RobbyZ

Would you like to join a gamejam?  Our entry is a emotional story-based game (walking simulator / adventure game) about some kobolds abandoned by their dragons.  We'd like to get some additional help on some assets over the next few days, as we're trying to have all the content wrapped up by Thursday night / Friday Morning.

Skills:  These areas could use some extra assistance:

Compensation:  $30~$50 depending on how many assets you can contribute over the next two-ish days.

Apply:  If interested, please mail jobs-2d-art@archiveentertainment.com with a link to your portfolio.

As someone who once did a very long term game project (an MMO that started development around 2001 and is still online in 2020, though not updated since like 2016ish), I wanted to encourage people to consider choosing stable, mature (& preferably open) tech stacks.

The advantage to a mature, less actively developed codebase - they won't have massive API changes.  Especially for a project that you just work on a little bit here and there, that'll mean you can spend your time on your game instead of updating your game.

Open codebases means that even when the original framework/engine developers abandon the project, you can soldier on.  The graphics framework I chose for my MMO's client was dropped by its creator, but I continued using it years on and making fixes and improvements as needed.  A closed source, blackbox engine could be dropped with no recourse, and even worse if there's no source on it, you may not even be able to open the editor anymore due to it not being able to connect to licensing servers (*cough* Unity *cough*).

And ideally, find one with a nice sized community still using it so you'll be able to get help with issues as they crop up.

Here's some that I'm eyeing:

What stable (preferably open) stacks are you considering for long-term development?

Thanks, I guess?  lol