Excellent concept for a phone game! Very good use of the limitation in my opinion! 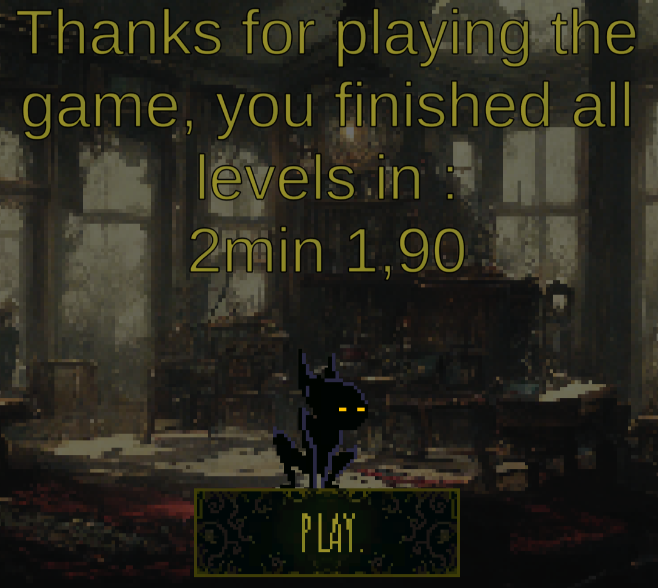 Dev here, here's a little challenge for the players! Try to beat my record in "Timed Run"...

Crazy originality, that's a very neat way to deal with the theme.
I love how polished and simple everything is!

My favorite entry of the jam. It's so polished, so enjoyable, immersive... Amazing job! Hope you win.

That's quite funny! I'll be honest, my stupid brain can't go above 20 in a row, at some point, I just don't know where I am anymore x).
Good entry for a jam, it's straightforward and simple, you know what to do at the very first second.
Losing at a game with such simple rules made me feel stupid. 10/10 would play again to lower my self-esteem!

Thanks you for your comment, that REALLY means a lot. Reading reviews like that from people we don't even know in the internet really is heartwarming and really pushes us to keep looking forward to our game dev journey. If at some point in life we decide to continue that prototype and make it into a true roguelike deckbuilder, we'll definitely share a free game key with you.
Now it's my turn to play your game!

Thanks a lot for the review! I totally agree with what you say, the scope of the project wasn't reasonable for 2 days. I promise that, if we end up continuing it and make a complete and balanced game out of it, you'll be the first to receive a free key!

Dice shapes are used in combinations.

Dices color only matter at the end of your turn, a'd trigger a passive effect: red deal a damage to random enemy, blue heal you 1 and green gives you a reroll bonus at your turn start

That's insane. You did so much in 48 hours, yet it's still very polished

Absolutely. It was the main reference for our artistic direction. Good job pointing it out!

Wow! Thanks for your kind words, much appreciated !

Thanks for the feedback. We're pretty happy with our game mechanics, but it is true that we didn't make an excellent job at explaining them in the tutorial. Actually, the symbols don't have any numerical values: for example,  a pair will deal the same damage whatever the symbol you use. The colors, however are important : if you don't attack an enemies with dices matching his color, you'll deal half the damage!

Not sure how to catch the cheaters lol! Funny idea though

Good concept ! I liked the idea! Had a bit of a hard time putting the dices on the stats though

Cool concept! You went for something very simple but made it very polished. Good job!

Hello !
Thanks for feedback !
We actually reverted to the previous build uploaded, which fixed the hp indicators !

I can't believe how good the game is.
You did that in two weeks. You can be proud of yoursleves.

Overall, epic intro, sweet menu, and then, comes the game.

It starts slow and you ask yourself : "alright, is that all?".

And then they come. Big waves of enemies, interesting attack patterns, your first death and time rewind... And the first boss. It's a classic bullet hell boss, with big HP bar and a few patterns, but still, it's well balanced, all attacks are interesting, you never get bored or overwhelmed.

And then comes the second surprise. There is more. Not just one level. Wtf. And what comes next is even better and challenging. I really loved the second boss, it felt so good fighting it.

Cool game ! A bit hard though :D ! Great music, gets you in the mood! Good submission overall.

Hey cool game ! First submission I tested that I could actually play through the end. It's nice to have a complete game with a start and a finish :) ! The rewind mechanic is funny

Hey ! Cool idea, but it's lacking difficulty. I think I can just roam in the world without picking up any powers and avoid the missile. It would be nice to have more dangers (other missiles, enemies on the ground, etc...) to make the game a little more balanced and interesting.

Funny little game with cute characters. I liked the music a lot and the UI.

Loved the style ! I needed some time to understand how to use the time power but I liked it once I figured it out. Really nice submission :)

Nice little game ! I like the style and the mood ! The RnG can be cruel sometimes though ! I want to play videogames, not read a book :'( !

Hello thanks for the feedback. It looks like you didn't test our final release though : we updated the game during the 24 hours extra time. We fixed a lot of bug and added a lot of polish on this final build.

I enjoyed playing it a lot. It's amazing you managed to create this much content in a month, good job. The controls are feeling very good, and the boss fights are kinda cool. The art is simple yet very solid and conveys the intentions of the characters nicely. You even managed to create menus and bindings! I think you really found the perfect project scope for this one-month jam!

The only gameplay problem I encountered is that enemies' attacks are quite hard to anticipate and feel a bit unfair, especially the first boss, but the fact that you can heal pretty often compensates for that.

Thx ! There will also be an update in the next 24 hours with a lot of bug fixes and polish !

Hello everyone! We're a game/level designer and a programmer working on a promising puzzle game.

The scope of the game is pretty small and we want to ship it around Fall.  The concept is quite simple: you use an arsenal of bombs as well as mechanisms in the environment to push the robot to the stage clear, unlocking the next level. This mix of goofy physics and puzzles is feeling pretty good and we're very optimistic about the project.

We actually had an artist, but he had to leave: he will not have time for the project anymore because of his job. So there is already an artistic direction that you can get inspiration from!

The project is a rev share. You'll get a fair split if we commercialize the game. Once again, the scope being pretty small, we're pretty sure this game will be shipped this year, so if it's successful, you'll see some bucks in the near future.

Here are some links to actually test the game. Some things have changed since then, like the camera system that felt bad.

You can play the game here: http://rioust.iiens.net/BuildCountdownWEB/

Here's a video if for some reason the WebGL build doesn't work on your PC.

Thanks for your time. You can contact me on Discord: Rhum#0895 or by mail (lucas.rioust@gmail.com).

We noticed a few minutes after the end of the jam that we didn't give the correct build : there is a fatal error in the third level... Here's the one we uploaded thirty minutes too late : https://rhum.itch.io/power-surge