Misremembered challenge, got a crate of each material to starting island instead. 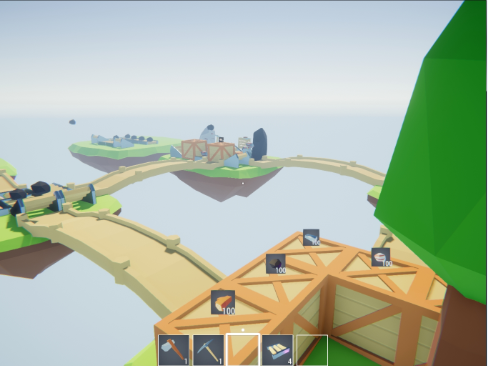 having the same issue here. I can see folders and save to them just fine. Up arrow still causes crash. Sideways arrows work fine.

It's been crashing occasionally when I click to delete a node. It also seems to crash if I maximize the window while it is trying to run nodes on large textures (256x256, using save file editing)

Share textures that you made that you find neat or are proud of, or just otherwise feel like sharing.

my first texture with this, I thought that what this tool would be good for would be randomly generated organic shapes that need variation in a game. So naturally, I made chunks of flesh! xp Came out well for my first texture. If I did it again now, (only two days later) I could probably make it look better. Though most of the gain over those two days would come from making new nodes.

A strange experiment inspired by the former. Should probably make the grass and beach be thinner.

An accident made while trying to make some weathered stone. Looks underwater-y.

I figured out how to do specularity and made shiny chocolate. Couldn't figure out how to color it though, since multiplying would make the white be brown.

This one is probably the most complicated one I have made. Came out looking very 3d, reminds me of voxel destruction demos. Had to go and lerp the colors together, make sure there wasn't color where there was shadow or light, glad it came out well.

Also made me realize that the lighting node changes contrast based on tile size.

It's strange that I'm this proud of stuff I've accomplished after only a couple days O.o

Was playing a game of pulling out random nodes and trying to put them together, came up with this. Probably will be my new avatar.

I managed to color a thing that went through the lighting node with the white part staying white! yay!

Now to figure out how to combine this with the specularity to redo the chocolate.

Reply
Tilemancer community · Posted in Post your nodes below!
rerere2843 years ago (1 edit)

Been having lots of fun with this, here are the nodes I've made: randomly mixes each pixel on the output between the two inputs. For use with directional blur. Makes each point point toward the center. Offset rotates these. Makes the pixels be 'regular' as in regular polygons, snapping them to repeating values and also looping them after a certain value. This is basically just a neat way of rounding numbers thrown in with the modulo function. Gets the distance (abs(a-b)) between the two inputs. Highlights pixels of around a certain brightness. Named as such due to how it looks when graphed: Tries to get the distance from a dark spot each pixel is. Lags exponentially with tile size, not sure how to optimize it. :/ Gives a chessboard type pattern, with the option for more than two colors. Due to a weird bug, the only sizes that don't have strange artifacting are numbers in 2^x, so the size input uses that.

(Note: there were some visual errors with the nodes that have been fixed since the pictures were taken.)

Been having fun with this tool, keep on accidentally calling it a game. Hope people find these useful! This raises up a texture by a heightmap. Not pictured is also an option to set whether it loops off the top of the image or not.

Good for visualizing heightmaps you make. Note that without a surface input it will all be one color, shading just came from the lighting node.

Don't know how often these would be useful, but I made these too.

I don't know if this would be a bug or not, but if you have a node with a space in the name, it lets you use it, despite that it crashes if you try to load a save with that node. It seems like either it shouldn't crash or it shouldn't let you use the node. (like how it doesn't show in the list or shows the default node if the node has a bug in it)

It also seems like the Lighting node changes contrast based on tile size.