I think that on day 3 in the 0.5 version and on day 4 in the older ones. In the older ones you can edit in the save file the day on which Tripods start their hunting mode if you want them to use them sooner.

If you scroll down through the comments, you find out somebody who posted a link to his collection of majority of the versions which were released. With the multiplayer one included.

I have already took risk of using the installer as my antivirus didn't find anything bad there. But thanks anyway.

Yep. The installer first shown me an error that it requires the admin access and then requested it.

Random game wanting an admin access to my computers stinks to me indeed.

The fix version was there already before. And I just tried to launch it after redownloading and it has still the no sound bug after launching, so it doesn't seem much fixed or updated to me.

Shame. If the developer would at least bother to fix the bugs, the game would be great as it is (with re-enabled survival and darkness/lighting features of old versions).

If you scroll down the comments, somebody uploaded his collection of old versions.

As the game got redesigned many times (one time even with multiplayer), it's shame though that there aren't any official milestones published because it is interesting to look how the game evolved.

I have downloaded this game and when I launched it, opposite of "full" installer download there, the main menu tells me that I play a demo version. Are there any limitations? And if yes, is there any place where we can buy the full version?

The refresh rate of my monitor is 60 Hz.

Windows. I tried the both released versions (1.1 and 1.0) and both have the issue.

I have encountered an annoying bug. When I want to look up or down, the camera movement is laggy.

Edit.: Now I have noticed that moving camera everywhere can get laggy too.

I have found a game breaking bug - in the forest, where you can collect a mirror, if you manage to jump on the mirror, you are then unable to move and have to force-close the game.

When you survive an invasion and get survival window, there is only "button" , which does nothing so I was forced to force close the game by alt+F4 as there is no other way to return back to main menu or to confirm the survival.

The game broke for me in two parts - first one is when I got the call, I couldn´t see my cursor for accepting/rejecting the call.

Second time after the another person shared his location with me, I was unable to do anything on phone, nor to close it. So I was forced to alt+F4 force close the game.

The game seems to autosave or maybe it´s saved when you sleep in your bed in the village. But sometimes the saving process seems to be broken (the game can´t find your save even when there is one) and to fix it in this case, you need to remove the "animal" folder in the Appdata/local one.

Started playing this game and while it´s good, it looks that saving of the progress doesn´t work there. As when I was entering the I think "Gulag" level, game crashed due running out of memory. So I restarted it, but it told me then that it wasn´t able to find my save. And I was sleeping sometimes in my bed in the village as I thought that this is way to save the game.

Or is there some else method of saving progress?

EDIT2: By deleting the mentioned folder above, the saving now seems to work. So it must be the corrupted save, probably by the game crashing, that it wasn´t able to find it anymore.

The concept is great, but after using Bigfoot´s powers to go underground, I got stuck out of screen (during it I had some conversation) and had to exit the game.

The game had update, but I don´t see any changelog to see what´s new.

This update makes the game ignore saves made in previous versions, as I see that you also renamed the name of the game´s folder in Appdata folder, in Windows. As it doesn´t read files from the Juice World folder anymore.

I copied files from the old Juice World folder into Juice Galaxy in App data and save loaded. Don´t know if it breaks any things though.

The game was amusing and for majority of parts fine, but I have found one game breaking bug and one clunky thing. On the part where player is playing as the woman and must cross the bridge with the two toialets spilling "blood" on the bridge, for few seconds game froze and then suddenly camera went upside down (like I was standing on ceiling) and all controls were inverted. Funny is that due the bizzare setting of both your games, I first thought that it´s supposed to happen, until I watched one video walkthrough to confirm that it´s a bug.

Also the final boss fight was clunky. Many times I visually saw myself hit him, but the game didn´t register it, so the boss got many free hits on me before I managed to somehow kill him.

Also it was already mentioned, but the mouse sensitivity is too low on default settings. And as the looking up/down isn´t fixed by setting the sensitivity higher in inventory screen due it not being affected by it, it was annoying.

I liked the game, it´s world, ideas and atmosphere are great. Though at the last few days there weren´t much new events happening in the world, nor not much new characters appearing.

Same on the door in first floor, where we are told that we can open it by lockpick (if we have one), but they get unlocked later.

Two months later, but there is an alternate path? Never noticed it. Unless you mean the part after being warned about the true nature of the "Happy trees".

Nice game, but what is the point of the titan´s attack, when none of them hurt the player character?

Also there is missing collision detection  on mountain (I went through it instead).

Also there is a bug - when scarecrow like enemy touches me, I can´t move anymore until I restart the game.

The game can´t be launched  as  you  uploaded only an .exe file of the game, without its dependencies and assets. Which means that the launch of the game ends with the error that UnityPlayer.dll can´t be found.

The game seems to be compiler  only for Mac, as the unzipped folder is in ".app" folder and I couldn´t find an .exe file to run it on Windows.

So either make a compilation for Windows or remove the "Windows" support icon.

Holy hammer... So does it mean that we will be eventually able to either avoid becoming a vampire or curing vampirism? Because now Holy Hammer doesn´t much seem useful with its healing aside of beginning of the game, before being turned into a vampire.

And I have one more bug to report. At optional boss fight with Zaniaryss, at the level "Map 55 - Earth realm - Hall of Zaniaryss", when I started the bossfight, there was some script error (forgot number). After killing Zaniaryss, despise her health  bar dissapearing from HUD, her name stayed there, and the boss music didn´t stop, nor the invisible wall blocking the exit, so I had noclip out of there and of course didn´t get the reward for defeating the boss, whatever it is. 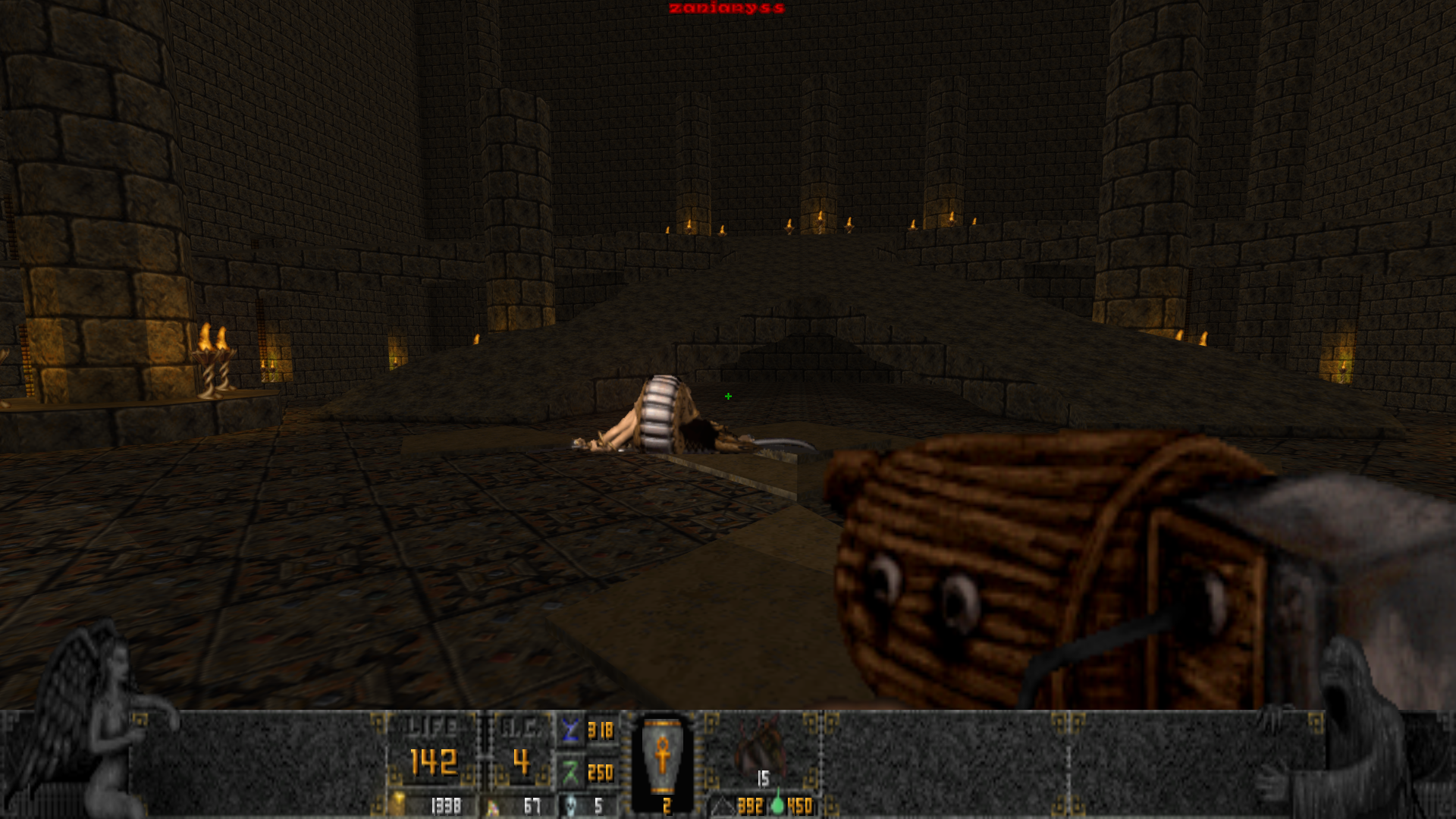 Also I have noticed that the mod has few areas where aside of exploration there is no reason to go (Gorgon territory, temple of forgotten God and the sewers under the second town, forgot its name). There would be nice to have some side quest. Or are these areas for the evil story line, which isn´t implemented yet (aside that creepy NPC in one Mortilla´s house)?

Since the 0.0.6 update you  can if you upgrade your flight enough.

Reply
Juice Galaxy (formerly Juice World) community · Posted in Does the game save across versions?
Reginald_CZ2 years ago (1 edit)

As all saves are saved in appdata folder, you can just delete old version of the game, install the new one and your saves will be in the new one available.

By Windows explorer, which you should already know as you already extracted the game. But you need to enable hidden files in "View" tab, in order to be able to see Appdata, which is hidden folder.

I think that we have to delete old version and extract the new one, as saves are saved in Appdata folder, you don´t loose anything by deleting game´s folder whenever you extracted it before.

In Czech Republic comma is used for decimal points. But in the Juice amount it seems more like a bug. But I don´t know how Unity engine uses locale features or thing like that. But as it uses C#, I think that this programming language might use the locale of the computer for setting things like time, etc. But there it´s weird and it more looks like some bug, as it uses comma instead of space between numbers (is that intended with point instead?) and then point instead of a comma for decimal part of number.

I think that save files, like in other Unity engine games, can be found in AppData folder, at least in Windows. For this game, the path is: "C\Users\[Your_user_name]\AppData\LocalLow\Fishlicka\Juice World". 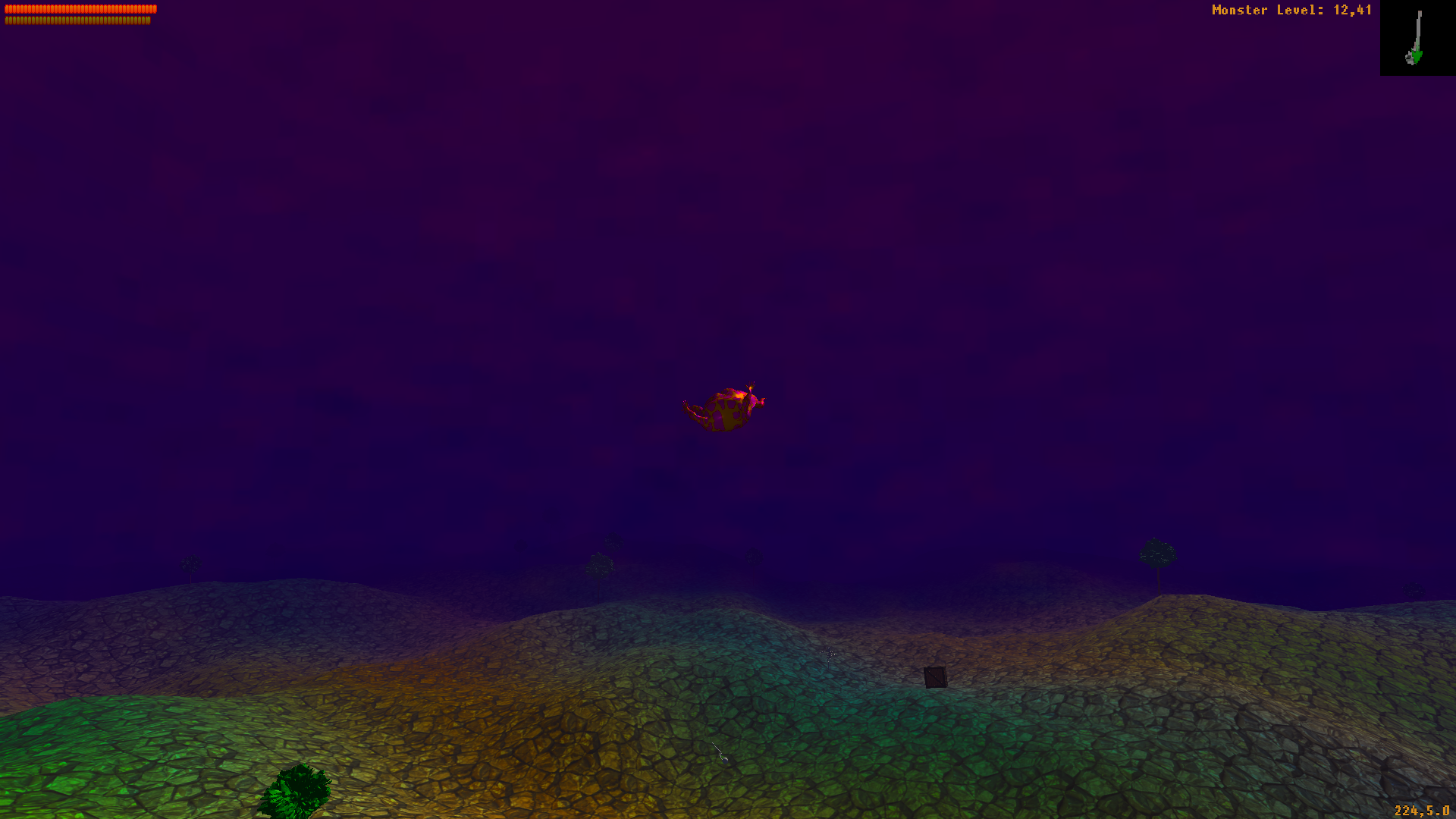 Working compass with pixellation disabled in 0.0.4 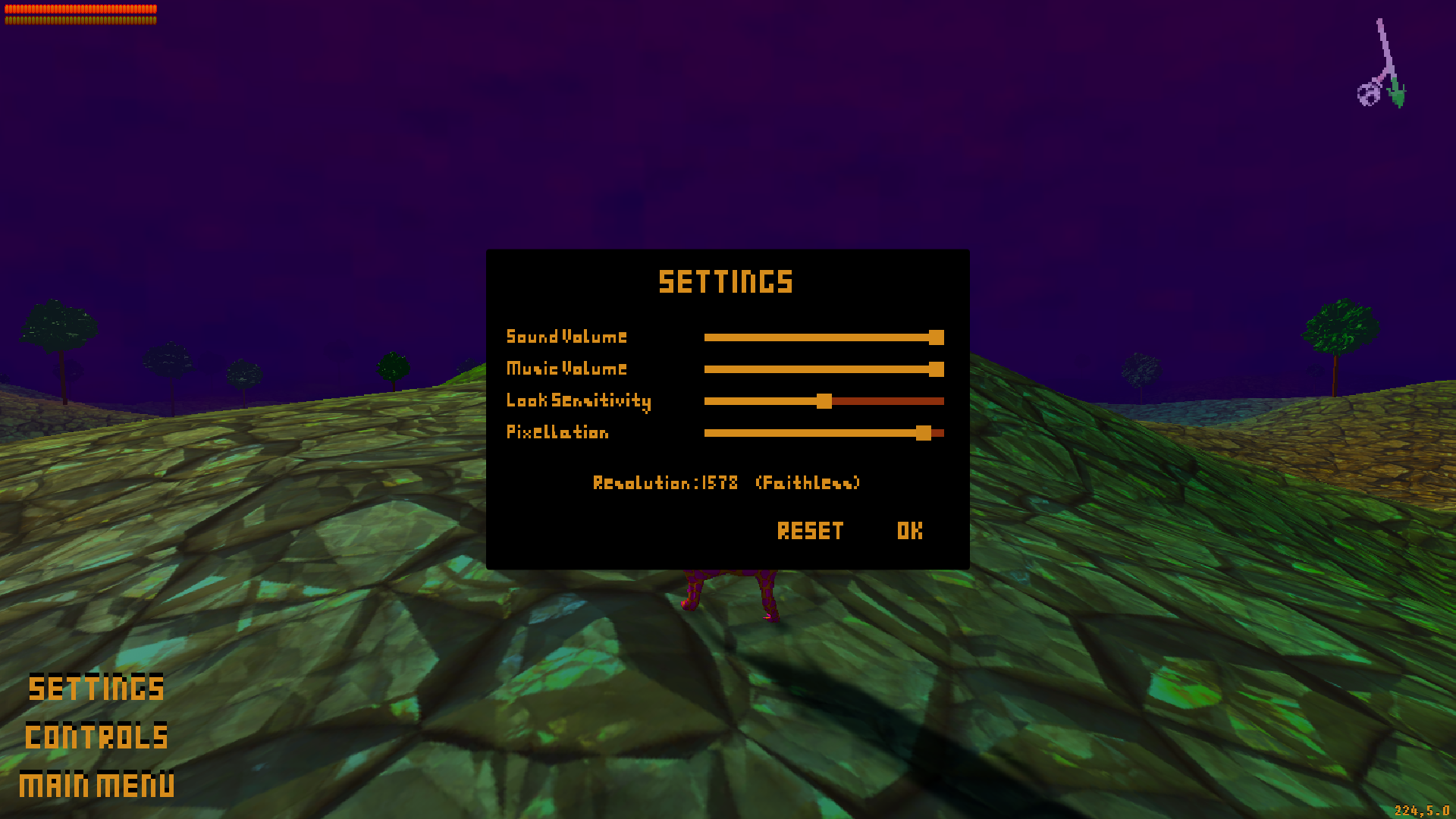 I think that only way to avoid the vampire is to never return in the graveyard, as you can find juice fountains randomly appearing in wilderness. But I don´t see any reason to avoiding the vampire, as when he sucks you dry, you become a vampire too so you can now drain juice from dead monsters and get much more of it than just by hitting them.

Yes. I didn´t see it anywhere on HUD.

EDIT: As you can see on screenshot below.: 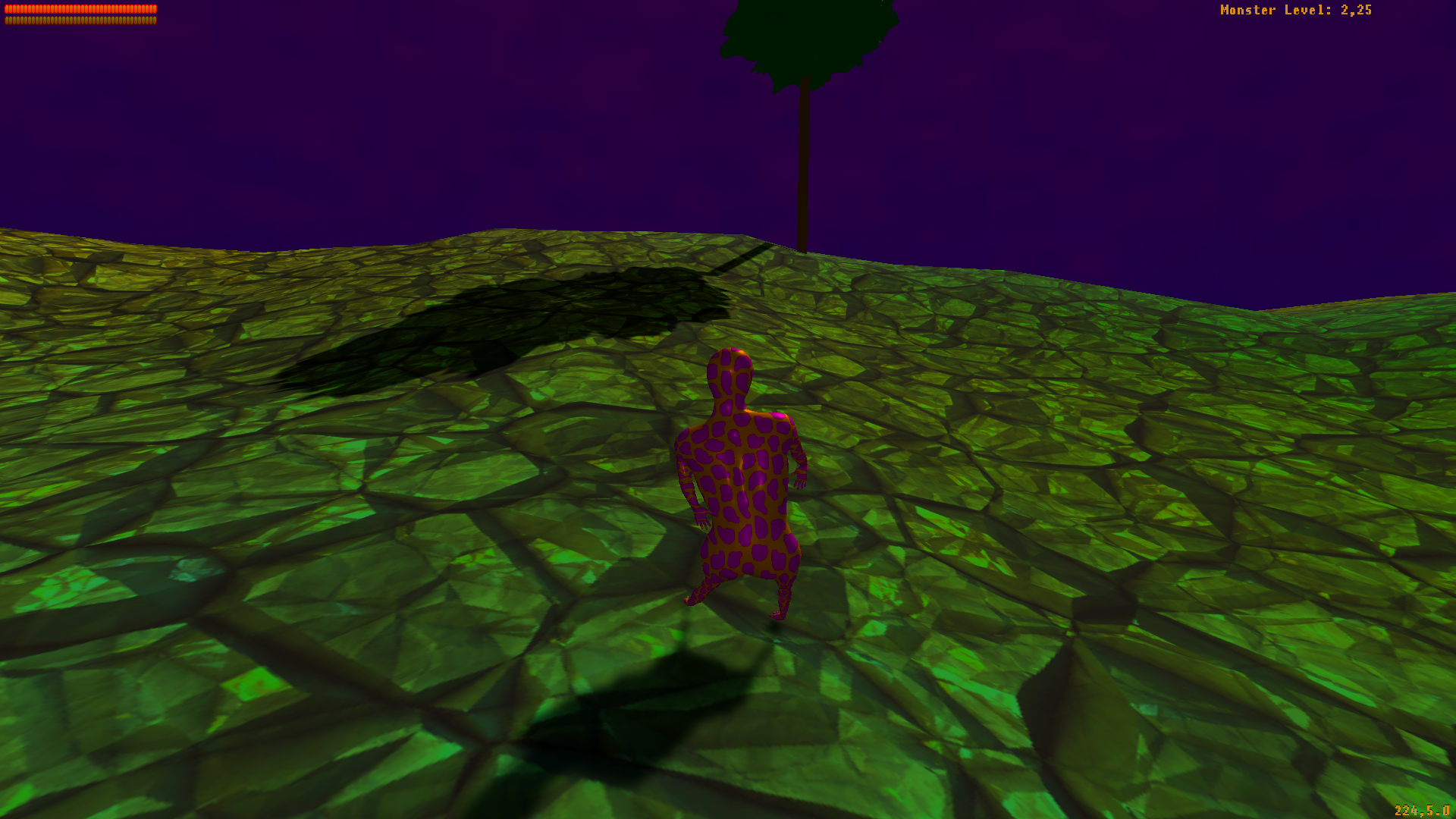