Thanks, that’s so nice to hear, both the book and movie mean a lot to me as well!

I hope you enjoy the mystery’s atmosphere!

Ooh, that would be completely acceptable, yeah! I would still check the feed from time to time, but it would be much less distracting overall. Thank you for the suggestion!

Hello everyone,
This is a piece of feedback & suggestion regarding the feed of the users we follow on itch.io!

As you may already know, if you follow other itch.io players or creators, some of their actions on the site will appear in your feed (https://itch.io/my-feed). Such actions include publishing a new game, updating existing games, rating games, adding games in collections, posting a devlog entry.
I find the feature very useful overall to follow the activity of the people I'm interested! Many thanks to the itch.io devs for your hard work. <3

In addition to the feed itself, a notification appears over the feed link in the top menu, to let know how many new items in the feed you have to view.

In the above image, the top menu seems to indicate there are 4 new items to view in my feed.

The problem is that, in my personal usage, I find these notifications far too distracting:

Problem #1 is by far the biggest annoyance for me.
In fact, I've had to unfollow someone who curated a lot of things on the site once, not because I didn't like what they did, but because the frequency of notifications was far too high.
(I also slightly refrain from adding too many games to public collections, for fear of spamming my followers with mundane actions.)

I realise that most users may experience no inconvenience with the feed notification if they follow few people. And I imagine that you've already considered much of this aspect when designing the feature. But here are a few possible solutions I'd envisioned!

Again, I imagine some of these ideas were already considered, and perhaps rejected for a reason at the time. But I'd love what other users think and if I'm the only who find the feed slight unnerving because of this notification problem!

I also realise that some of the solutions might be too complex for what ultimately remains a very small Quality-of-life change.
No worries about it, basically, I imagine the site may have other priorities! This can wait, but I'd love to hear of other users' experiences in the meantime.

See you around, and thanks for reading!

Thank you so much, I'm glad you enjoyed the story!
I know the pacing wasn't the best, but happy to hear the presentation and mystery leaved a good impression!

On the subject of the character art, I hadn't expected the royalty-free sprites to be more bothering than the silhouettes, though it makes a lot of sense now that you mention it!
I used these sprites mostly to get sets of face expressions, since these characters have some amount of dialogue. But I understand how it makes then strangely stand apart too. I'll keep this in mind for future projects! And yeah, Hyanide's art is indeed fantastic. <3

> “The letter system could be useful to include "extra" updates in the original with worldbuilding that didn't advance the main plot...”
Oooh, interesting, I had never thought of such a use, but I see how it could be very useful for side stories!
If you ever need clarifications or coding help regarding this system, feel absolutely free to ask, I'd be happy to do whatever I can! (I'm Rastagong#9020 on Discord.)

Hello! Sorry for the delay in answering!

Yes, the fact that I left the script files accessible is intentional! I did so both to share knowledge and because there isn't much to hide in such a small-scale, free VN anyway.  ^^

I really don't mind if people have a look at the script, play around with it, learn something —in fact, I hope some people do and it proves useful to them! I've tried my best to document the code exhaustively with comments so it could be helpful and comprehensive to curious readers and fellow VN developers.
Scripting a full story and GUI can be difficult, and I hope that open source examples of completed VNs like this one may help a bit. There's probably nothing which is especially complex or impressive in the script of Sylvan Disappearance, but I still wanted to do my part! If anyone at all finds any use in some part of the script, I'll be very glad. ^^
Oh, the epistolary screen might be of use to someone! It's probably the most “complex” part of the code, and I guess it might be useful as a storytelling mechanic in other VNs. In fact, I'm planning to distribute the code of this system as a standalone recipe on itch.io and Lemmasoft in the near-ish future! I don't mind people reusing parts of the script entirely, as long as I'm credited.

The only thing I did protect and wouldn't want to see reused at all are the original art assets drawn by Hyanide.
The other assets are all free to use in some capacity (the full list of sources and licenses is in the Credits menu), so I did not protect them either. :)

Hope this answers your question, and that you enjoy the story!
Thanks for asking, this reminds me that I should add a note about this on the page and in the update I'll upload in a few weeks. ^^

Thank you so much, I'm glad you enjoy the general presentation!

If you're interested, I wrote a post on the devblog on the specific topic of photographic backgrounds, and why I enjoy them so much. :)
And the most recent posts on the devblog feature other inspirations in terms of atmosphere as well.

If you're in the mood for a short visual novel set in a pseudo-Victorian setting, you might be interested in Sylvan Disappearance.
It's an epistolary mystery which revolves around Mirabelle and Célia, two close friends who loved to run story nights for their friends in a village, but grew apart from each other after a certain incident.  The story follows Mirabelle in her new life by the sea, as she starts exchanging letters with her former friend.

There is some amount of psychological and folk horror, but plenty of lighter moments too. 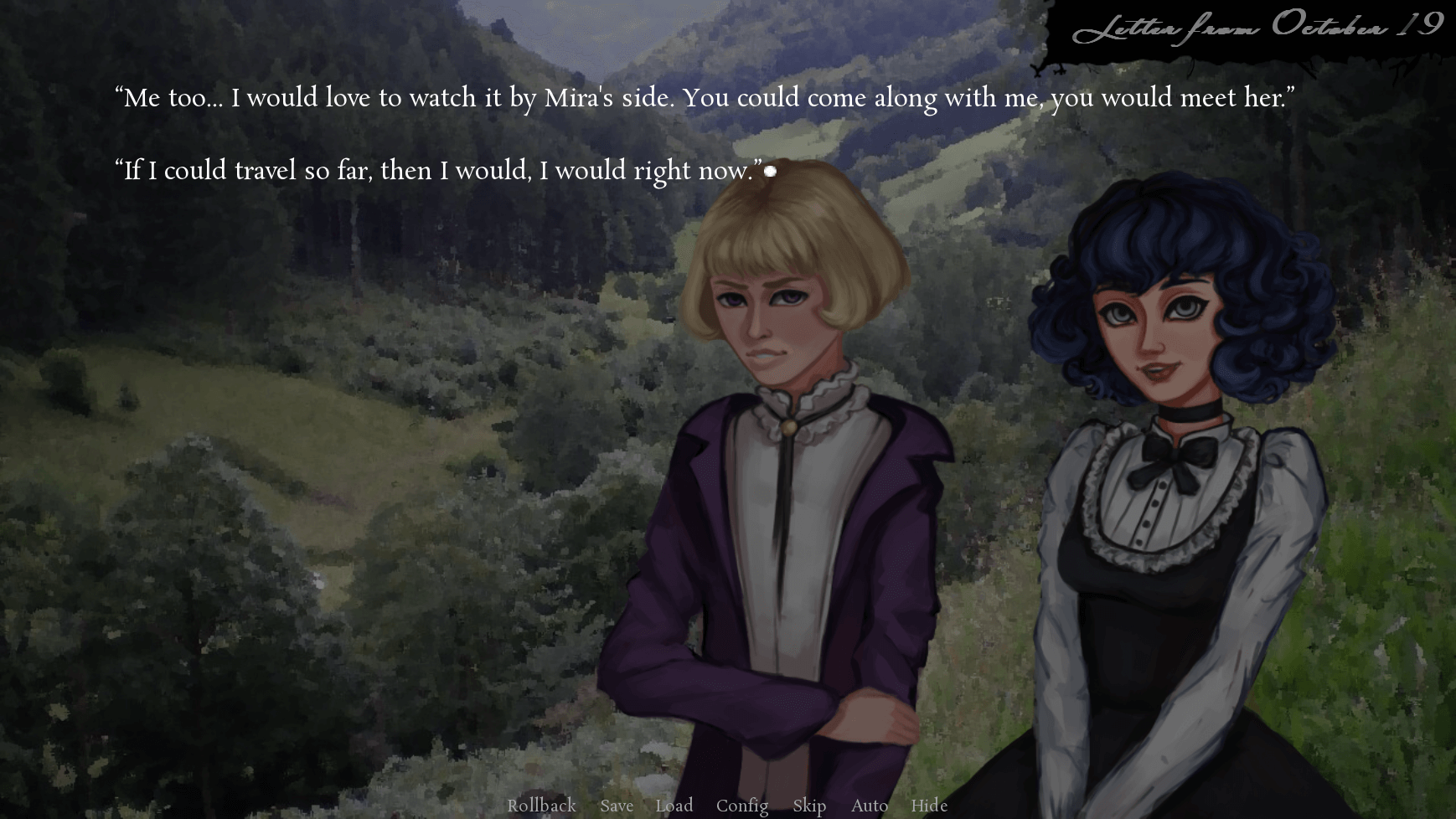 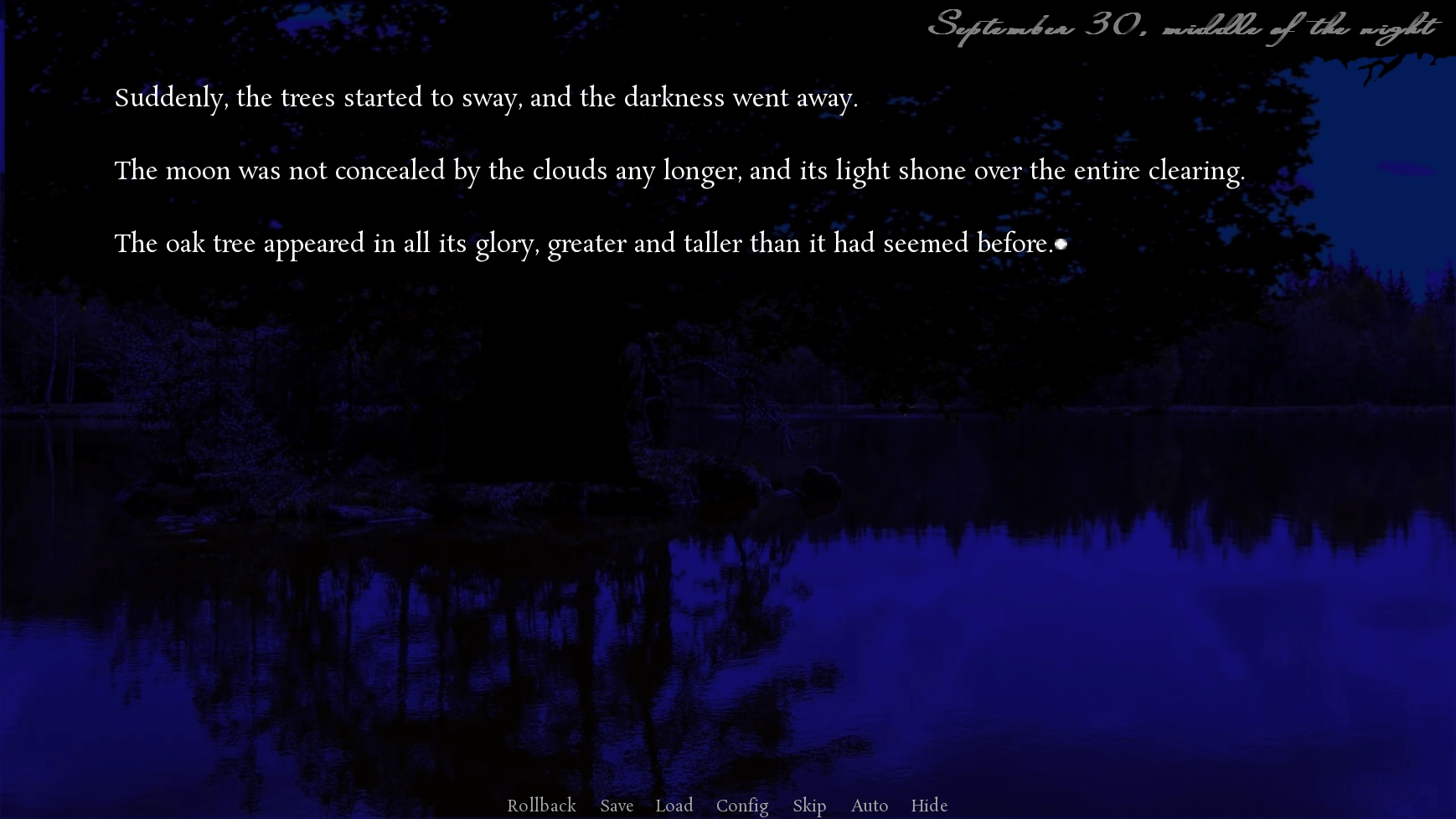 I would love to read your comments if you ever choose to read the story!

Aaaaah, thanks a bunch, it means a lot!