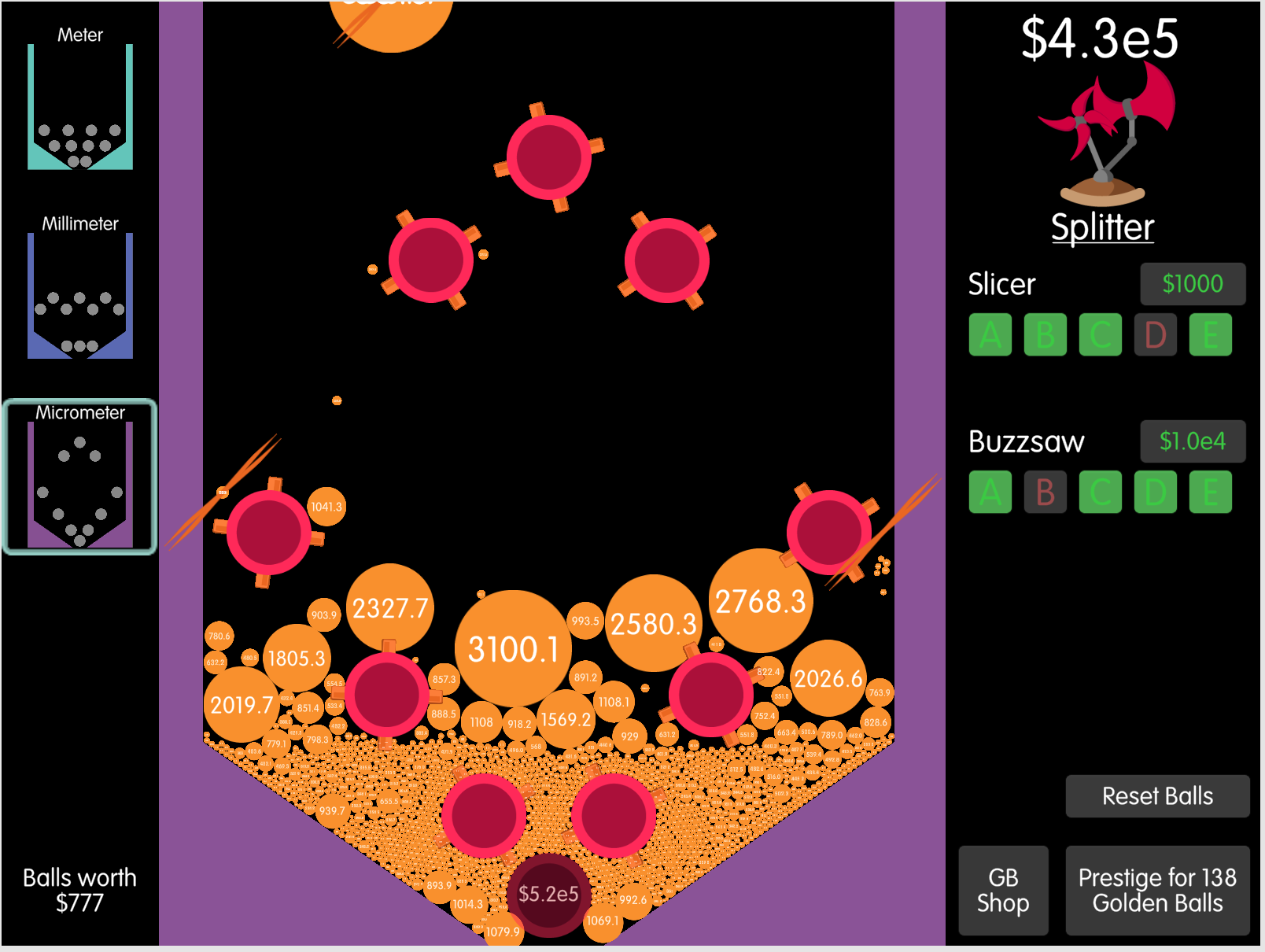 I think I won.

Whoa no carbon at all? That's crazy, I'll take a look.

Yes, it appears that having caps lock on was preventing the keys from being registered as input. This is now fixed, play with caps lock on if you so choose :)

I apologize,  you may have pressed caps lock. I will fix this as soon as possible!

I simplified the controls, removed the need to press Q, which was an artifact from before. I put the recipes into the menu visually, and since everything is color coded, hopefully it will translate without additional text in game. The thing with the arms is a good idea, but I'll need to think about how to integrate something like that if I do end up doing it.

oh thanks, lol. I don't do great with ambiguity, not a design flaw. Instead of removing them, maybe consider adding a bonus objective, or just something you can feel good about making. Like an extra good solution that just takes more time and uses the 'nonessential' buildings.

Actually I just beat level 2, but I think it was a glitch. I spammed the sleep button and the mason went to -13 decay days before I 'won' and it collapsed.

yeah we're dumb, but no it's not that, I tried a bunch of different setups, two farms, two houses two masons, OR one mason, one house, one farm, OR two houses,  two masons, one farm. But I keep losing buildings no matter how I set it up and I can't come back once they start falling because I have not enough stone. It's a super appealing game both aesthetically and in concept,  but we got hard filtered.

Very difficult, me and my friend spent an hour on level 2, we both got filtered.

The game is technically playable on itch, but I cannot host the server here, to play online you need to go to the digital ocean version. So since it is mostly multiplayer, I figured I should downplay the version with no server connection by making it tiny.

No fullscreen, but that's a good point.
The page was under construction when you first went to it I think, I've been editing it recently.  The little playable 128px by 72px version is just there so the game is tagged as 'playable in browser'
The interface is supposed to be like a browser version of Smash bros, but yeah it's atypical to say the least.
Oh and the up-arrow thing with scrolling I can fix with CSS if I can figure out how to send the CSS file to the page.
Thank you for the information!

Thank you for the bug report! I have not tested on firefox, but sadly I expect it not to work because of certain gradient drawing things I do, which aren't supported.

Does it fail to run completely? Or does it just run in a way that is bad?

This thread is dedicated to player feedback, I'd love to hear it!

I went and made the doors lock you in until you kill the enemies now, and added a few types of enemies that increase the challenge. The glitch with the door is a bugaboo, gotta think of a nice fix.

There is no goal or ending yet, and the map has infinite generation as you explore, so the numbers will go up forever. I will make it harder.
Yes I was thinking a Binding of Isaac clone would be a fun break from Pomao.

I'd love to put in a minimap, but the way the world get generated right now; it makes a crazy fractal that can't be easily mapped in a meaningful way for a human. There's no end message, it's infinite.

You have a health sort of flower thing, it's not a bar, but you do have limited health. If you didn't fight a boss, I can understand the lack of challenge, but the bosses are pretty tough I think. I don't really want to use clicking if I don't have to, but maybe I could make it an option. Thanks for liking the sound though :) And thanks for playing.

Feels like you may have got a sin/cos call flipped somewhere when I try to whip with the mouse.  Also, the sounds are a little imbalanced.

I can have a fixed length wait time, but I don't know how to do a dynamic length one based on connection speed / loaded assets. I opted for no loading screen because I didn't want to set a fixed one. It's something I need for sure though.

Sorry buddy, I had wasd at one point, but they didn't feel as good so I dropped them

There are three bosses in the demo, but no final boss. If you fought three bosses, you probably saw everything.

According to the system.

I believe it was the venomous pit.

This is gorgeous and the cell phase in Spore is one of my favorite games by itself, let alone the rest of Spore. I played to the second level on a mac, and the framerate sadly became unplayable. I will have to try this on a more powerful computer, as it already seems to be a much better version of one of my favorite concepts.  Extreme promise.

Thats a really interesting idea about egg momentum. I tried scaling the movement to have a really tightly held maximum speed, but I could see the egg tossing as being a consumable way to exceed it temporarily. The jerky platform clipping is a consequence of trying to keep the minimum skill required to play low, I could make the platforms reject you unless you land on top of them, as in: you have to go around, and not from beneath. I imagined the controls to be like Smash Brothers on the switch, with directional input dominating the play, and smash has platforms you can pass through from below.  Now that you point it out though, it would be an easy fix, if I pop the passable floors into the roofs array as well they will be impassable.

Thank you so much for playing, and for the feed back!

This is super cute and reminds me of Eufloria in its aesthetic.

"I want that to get funded"

-My brother when I clicked on this page.

Edit: I didn't realize there are abilities until now, pretty cool, but now my score is 60.

Edit: ok yeah, I love this game, its gonna do well if you have any avenue to release it.

Edit: I probably shouldn't have, but I made a knock-off. I figure this may make you mad or happy depending on your perspective. On the one hand, its a bad rip-off, and doesn't work the same, and this is probably the only game in this demo day that has a bootleg.  On the other, I took your vision and twisted it. Anyway, http://ditzbitz.com/bounce.html

(Please play with a controller if you can, its just better)

The controls are:
Keyboard:
WASD to move (W to jump, S to drop through platforms).
IJKL to direct tongue and eggs.
M to fire eggs.
N to ground-pound.
Space to lick.
E to talk to NPCs.
P to pause (opens level select).

Controller:
Left stick to move and jump and drop through platforms.
Right stick to direct tongue and eggs.
Right stick will lick by default, to throw eggs hold right-trigger and use the right stick.
X (or equivalent) to ground-pound.
Right trigger to talk to NPCs.
Start to pause (opens level select).

Good luck buddy, I have a strong suspicion that you will win :)

Which browser is "regular" to you though? I only ever tested it in chrome, but I think some browsers like Microsoft Internet Explorer may have issues with it.  Thank you for replying!

Interesting, what browser are you running it in?

It was actually based on the sequel to that game, great eye for mechanics. I'm looking into getting some better graphics set up, also music. Thank you for playing!

Thank you for playing! I'm glad it didn't take too long to get the control-feel, my previous games are more difficult to get the feeling for.

You're right, I should add a final boss or something.

I've been toying with the idea of falling sparks, and maybe rising smoke that obscures the shot, I had not thought about wind, but that would be easy to add as it doesn't need any fancy graphical representation.  I'll play test a version with wind and I will think about adding it (at least as a setting).