This was so, so good. All the aesthetic of the surreal, lost place in between was exactly my cup of tea, and this was beautiful to play through!

When creating a world, you tend to get a good-looking place with many deserts and I am not claiming that your algorithms in creating climate zones are bad or wrong. However, even  with the standard rainfall average being 990mm/yr, which I believe is the same as with Earth, the non-desert areas seem to get completely insane amount of yearly rainfall.

I'm sure you know, but as an example London, considered gray in weather, has 601mm yearly rainfall, Chicago next to some big lakes has 993, Manaus in the middle of the Amazon has 2300 and Bergen at the Atlantic coast has similar. Yet the standard for a "grassland" unless right next to a desert seems to be over 1000. forest (not rainforest) around 1800, a swath of northern taiga in my current world has has a rain/snowfall of 2700 (Yakutsk in our world has 240), rainforests have vast areas of 4000+ rainfall and so on. I don't know if it's wrong, but it feels super high given how few places in our world reach over 3000. My town in a super-forested northern zone has 450 yearly rainfall, you can't really even find places like that in many maps. 1800 grassland, one square of 200 next to a desert and then it crashes to 0. There does not seem to be such a place as a "dry woodland".

To finish, I hope a screenshot is okay to add. 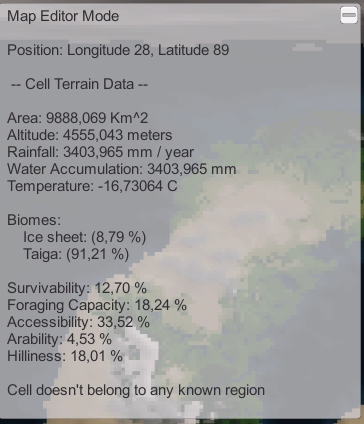 Quite a place - one kilometer higher up than Lhasa, and it rains 2x what it rains in Jakarta, equal to the western coast of Borneo.

Thank you for you answer doctor water bear.

This might not be a correct thread for that, but I'd like to give two UI feedbacks - first, I'd love to have a button shortcut for switching between previous and current overlay view. Say if I want to swap between region and polity view.

In addition, while info bloat is a thing, I'd hope for some kind of info spreading between overlays.

Some few examples: if you look at a region, show "this region belongs to polities X and Y" or "this language is spoken in polity X (or by peoples X and Y" or the region view would show their human population too.

Hello, and thank you for this really promising project. Going to be a long way, but the journey's the important part, or something :p

First of all.. this is probably a really stupid question, so please forgive me. But when you look at a map, like mine, year 379k, there are several polities, colored by a color. In General data. Then most of the world is covered in red pixels. What are they?

First I thought, obviously, "people live there". But they clearly live on non-red pixels too. Cannot be a "many people live here" either.

Then a few notices, not necessarily criticisms:

When the first tribal polity appeared in my game, it had a whole lot of members, don't recall exactly, 200,000?

Also, while I get that one square on the equator is 10,000sq km, and the population density is 1-3 people per sq.km, this still means a very huge population that has spread to every corner of the map, and yet most haven't contacted anyone.

Related to population: Agriculture was developed in my world like a 100k years ago. (IRL,  it has existed in our world for maybe 10k years) It has appeared as several small dots all around the map. After a very long time it finally started to spread, and as I expected, the polity that had it spread like a kudzu, but that's only in one "invention" spot, all others are still 1 pixel after 200k years or so. Should they not spread far more quickly to overcome foragers? Not "automatically", of course, but still - they clearly aren't failing experiments in farming either, since that one pixel has been farmed for tens of millennia. (Generally speaking, I think things take very very much time to happen in years)

Of course, I think answer to these is  "it will work better later" and I get that completely!