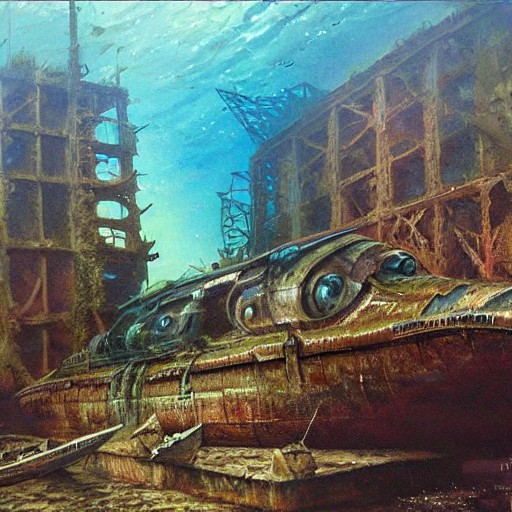 The Precursor Sites are abyssal dungeons were dug into the ocean floor millennia ago, hidden beneath the icy, inky waters of the Arctic. The aRC-TeK organization sends subaqua teams like yours to retrieve alien tech and extraterrestrial materials from the Precursor Sites. Treasure items are rated in GP (generative potential) upon return to the substation and you are rewarded accordingly.

It is not simply exploration. The aliens are gone but their servitors remain. Biological, mechanical, biomechanical. These constructs and creatures are studied and recorded in an aRC-TeK recognition guide referred to by crews as the Monster Manual.

When you encounter Precursor servitors or rival crews, it becomes a game of stealth, detection and submarine warfare.

You return to the surface station for downtime, during which you can fix and upgrade your subs, interact with other sub crews and station personnel, and build connections within and outside the PC team.

The Venom of Yara’Raka is an adventure set in 16th-century Brazil. designed for a mediator and three to six players, with an average duration of three hours. It includes six pre-generated player characters, all hired hands on the Ribeiro cattle drive as they are focred by the Governor to relocate from the coastal lands no wanted for sugar plantations.

This is an adventure for The Elephant & Macaw Banner Roleplaying Game. You can get the full rulebook in PDF here and the free Player's Guide, with everything you need for your first game session, here.

The rancher Carlos Ribeiro, forced out by the Governor’s decree and after considerable losses amongst the cane fields, quickly hired some brave adventurers to escort him and his cattle to the fertile grazing lands of Pituaçu. The way is hard and dangerous. Marta Ribeiro, the rancher’s wife, is afraid about the journey because they are bringing their newborn son. Oyapó, the expedition's Tupinambá guide, has guaranteed that the Pituaçu region is ideal pasture land and will be a good place to settle down.

The journey is hard, but things get even harder when little Oyapó is kidnapped , and your adventurers must confront a supernatural menace to rescue him!

Revolution Comes to the Kingdom (RCTK) is a tabletop roleplaying game about a small country in civil war after WWII. You travel to each of its eight valleys, lead the people to a spiritual awakening, confront the monsters that lurk in the dreamlike catacombs beneath each valley, and free the Kingdom!

It’s a game of difficult journeys, raids, prison breaks, foreign mercenaries, code books, sniffer dogs barking along the banks of a river. It's also a game of spiritual awakening, exploration of ancient places, visions of awe and terror, and struggle against the Eight Evil Thoughts.

"Playing the Game" gives you everything you need to start playing right away. The other parts - "A Welcome in the Hillsides" (setting) and "GM's Toolkit" - are available to Patreon supporters. RCTK is in active development, and this is a beta release.

Just released for PWYW today, Revolution Comes to the Kingdom (RCTK) is a tabletop roleplaying game about a small, fictional country undergoing a civil war in the years following World War 2. Your characters must travel to each of the eight valleys, lead the people there to a spiritual awakening, and confront the monsters that lurk in the dreamlike catacombs beneath each valley. Only then will the Kingdom truly be free.

RCTK is in active development, and this is a beta release.

Just now uploaded to itch as a PDF!

This is a nice video review that Indie Press Revolution did a little while ago: