Loving the demo so far, but it keeps freezing my computer (playing on 40HZ)- does anyone have any tips?

so so stunning.... i love that this exists. thank u dearly for sharing this with the world dev team<33

WOW! this demo was just fantastic- i love all the gorgeous details like the horn sounds at the title cards and the weaving/knot motifs throughout the menu etc etc. I couldn't stop appreciating the art, and I'm in love? with all ? the ? characters? and just the world- all the 'arthur's ass' and little quirks were utterly charming. I'm not one who often is curious enough to play through every single decision/route, but I definitely was here- many thanks to the dev team and I'm excited for the Kickstarter:)

just wanted to echo the other comments and say that i love this game!! i wanted to thank the dev team for such a wonderful story<3  the art and writing were so well-done and enchanting! it's really original and nora is so fun to play! i just finished my first route and am so excited to play the rest:) just one quick question- what am i supposed to do about the elliot sized hole in my heart now??

Chapter four was such a treat oh my goodness! The art, the writing and music worked so well together to communicate atmosphere!!
Just wanted to let y'all know unity did crash on me a few times when trying to exit the game from the 'end of chapter four screen', but otherwise smooth sailing:) thank you dev team<3

just came to say that i while I knew there were different routes available I didn't appreciate how unique they were until I started my second playthrough!! it surprised me just how different they were, and I really really appreciate that- this is basically three games in one!:) i love how they all fit together too<3 ty dev team

SO GOOD !! wow:) this came recommended and i have to say it blew past my expectations it p much all aspects. It's clear how much time, thought and love went into this <3 thank you devs

I love how EK is developing into such a whimsical and whole landscape! All the characters are so dynamic and charming, and all the work and passion that has gone into this story shines through. Thank you for sharing!

thank you for the reply!! I thought I had, but I probably just made a mistake on my end and accidently replaced my old saves😅

Hi!! So excited for chapter 4!

I had a little tech issue I was wondering if anyone else ran into/could help with? I downloaded EK again, but when I went to run it I couldn't load my saves and all the data folders from other versions appear to be gone? Replaying isn't a big inconvenience lol, but I thought posting here might be worth a shot! Ty!!

I'm excited for this update- thank you for listening, learning and addressing these concerns!!

What a cute demo!! I'm so excited to learn more about this little world, and its cast of characters! I really like the warm color scheme and all the details- like the carvings in the text box frame or foliage the backgrounds! thank u for sharing this game with us!

Just fyi I got this error at the very end of the game right after 'thanks for playing...' 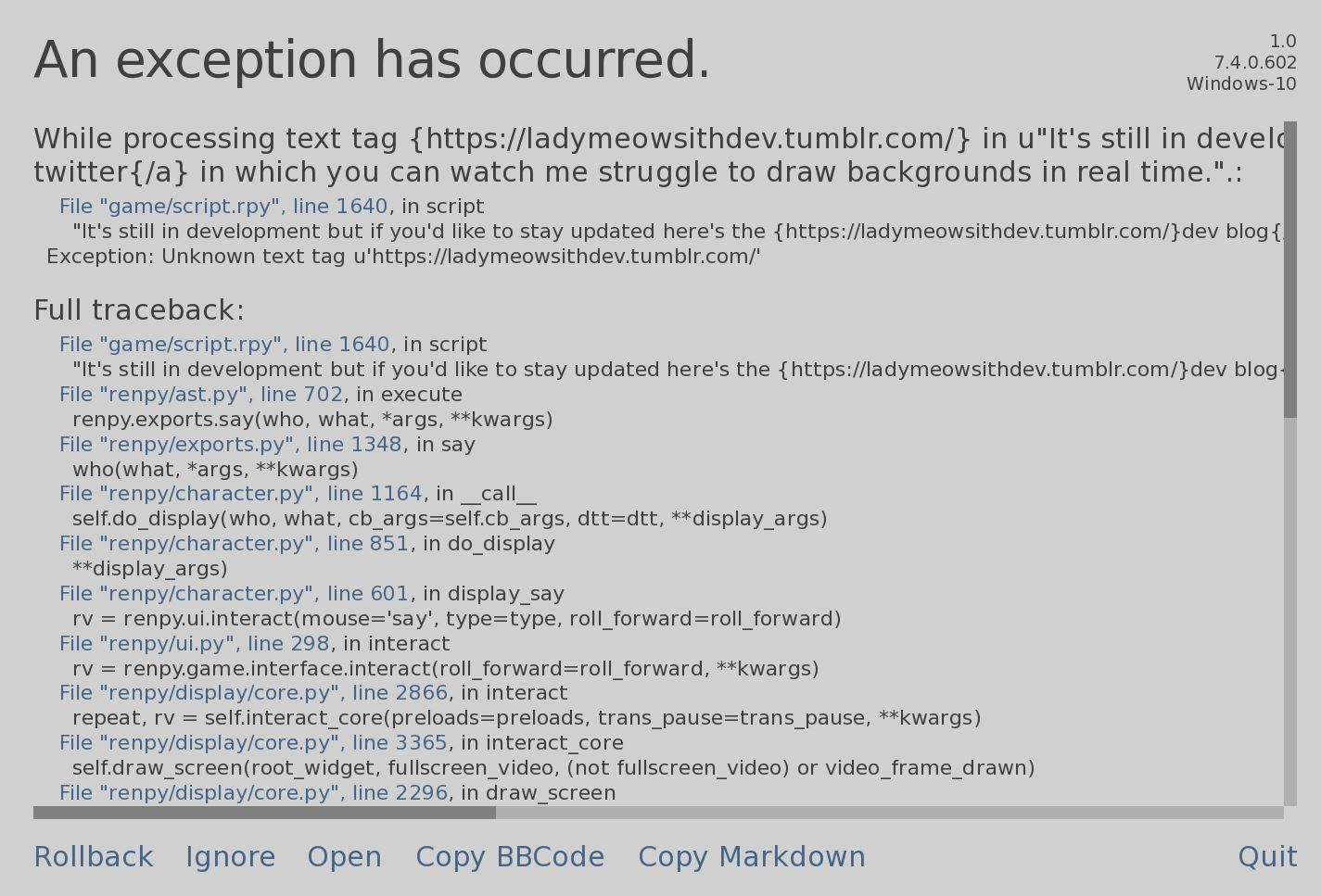 idk what kind of feedback ur looking for, but i also felt like there were a few sentences that might read easier w commas? but totally feel free to disregard this!! not a big thing

I'd also like to know the best way to support the devs!!

So I may or may not have stayed up all night and played through in 6 or so hours..... This Game Is Fantastic. Definitely Top 10 I've ever played, it is so well made. It's remarkably thoughtful, both in the story and in the build. The complicated (in the best way) plot is complimented by simple controls, and the graphics are beautiful and charming, the maps are engaging, the character development keeps me on the edge of my seat... I have to play more! The detail is stunning, the little animations are so smooth... I lack words to express how thoroughly I loved playing it (hopefully me sitting down and not moving for 6 hours can express some of it haha). I'm a little obsessed. All my kudos and thanks to the devs for sharing this amazing game with us. Thank you!!<<33

I think the only thing I desire is a way to save + access the title menu at all times in gameplay. But, it wasn't a big issue at all. Thank you for including this in the Racial Equity Bundle too!

this is such a fun and unique game! i love the looks + i feel like I'm learning how to play it reach round haha thank u devs!! x

this game ran really smooth for me, and the graphics are gorgeous!! the whole game, i loved looking at everything! I enjoyed how the plot developed and meeting all the characters! I can't imagine how much work went into developing this little world, thanks to the dev team<3

I was just wondering if the game is still coming out this month, or if it'll be next month! I saw there was an update w/ a countdown on kickstarter, but it was for backers only. I tried to look for this info elsewhere, but sorry if I missed it! Thanks for being a great dev team- I'm looking forward to buying:) especially after you guys were so incredibly consistent with WTNC's updates

LOVE THIS!! the colors, the little interactions, etc etc <<33

I'm excited to check this out!! Do you guys think you might make any games with romance-able female characters in the future?

:,) I adore da and lookin at the art you guys have up makes me ecstatic! bioware may never give us the da4 we deserve, but wtnc is willing to give me errant kingdom and for this im thankful

Got all the endings!! Super cute, thanks for sharing:)

This game has cast a spell on me- its so captivating and enchanting!! The music, the characters, the scenery, are all so delightful! It seemed to touch my heart so easily. Thank you so much for sharing this game with us- I expect this is one I will find myself coming back to time and time again.

Really excited to see what's to come in the full game after such an dazzling demo! Thanks for sharing:)

I've only just started the demo- but I'm enchanted already! I'll make sure to leave a full review when I've finished! However, one thing I've noticed is the Grimoire- the symbol on the cover of it, and the symbol for "darkness", is the Star of David. This doesn't quite sit well with me; surely a five-pointed pentagram could serve the same purpose that the six-pointed Star of David was intended to? I think it may even be better for it, as it is already associated with the occult/magic, rather than the Star of David which is associated with modern Jewish identity. If you wish to avoid religious symbols entirely (as the pentagram is used by some Wiccans), a triskelion may also be appropriate?

Edit: I see this was already pointed out- my bad, I should've read on!

Also I did notice two areas that could be re-worded if you want??

"In that case, the Lord President..." i'm probably just picky, but 'Other than that' or 'in addition to' would be better suited, as "in that case" usually references an alternate or exclusion, rather than something that is in addition to something else

I don't mean to come off critical, they were just two moments that took me out of the game so I thought i'd mention it- sorry this comment got so long ':(

THANK YOU!!!! The dev team is so amazing!!! The responsibility, reliability and communication they express is so refreshing and they share this wonderful game with us :) thank you for being great

I'm so tired of kickstarter and similar platforms being abused. Creators need to be super responsible when using them, because abusing systems like this destroys trust in indie media, and thus indie media as a whole :/ like yeah we're all people and shit happens, but its past that- Agashi is subject to legal action by every single backer at this point, under sec 4 of kick's terms of use- but like none of us actually have the resources to do anything so no one can police this shit. Creators who scam need to be shut down or meet some consequences. If this keeps up indie media is in the toilet and we all have to rely on big names for games...

While it's kind of everyone to be supporting Agashi so, it's completely irresponsibly to abandon projects that people have invested in- it reflects poorly not only on the creator (which makes people less likely to support them in the future- good for Agashi or "Lee Almonte" for not having much connected to those names/aliases I suppose), but unfortunately also on all indie media. Referring to the kickstarter page , several people have already noted that this is the last project they'll invest in. People need to feel confident supporting independent artists and creators via kickstarter, and similar platforms, because it's a seriously fantastic resource, but the more its abused, the more people will only be willing to support games they'll know they'll get- i.e. big gaming companies, and letting them be the only people to produce games would be terrible. As hiyamelle said, backers should at least be informed Agashi can't fulfill their project- that way a compromise could be met between backers and creator. Despite the demo illustrating promising potential, I'm sorely disappointing about this turn of events. Ghosting backers after raising $11,553 could basically be seen as theft actually considering that Agashi entered into a contract with every single backer to complete the project once the game was successfully funded, and any single backer is currently in a position to pursue legal action under section 4 of the terms of use. :/

I adored playing this! The conflicts are fleshed out but not drawn out, the characters are charming while insecurities and personal conflict(s) are dealt with realistically! Its a world with good depth, and fun story!! The art is also so enjoyable and the backgrounds are well done!! Thank you so much for sharing!!:)

Really fun game!! The art is fantastic! Loan Wolf is short and sweet without coming off as rushed or shallow! Thanks for sharing Rumblebee

This game is seriously fantastic!!! The characters are well developed and likable, and the plot is fun, while dealing with more serious topics appropriately. I absolutely love it. Takes me back to 9th grade in the best way possible <3 Thanks for sharing with us, Brianna